This article discusses the many types of advertising signs used in the 18th and 19th centuries to attract mariners, especially tavern signs, as taverns provided an important place for mariners to plan voyages and relax upon returning home. It originally appeared in the July 1939 issue of American Collector magazine, a publication which ran from 1933-1948 and served antique collectors and dealers.

Signs have always furnished a vivid means of advertising wares and attracting the attention of prospective buyers. Pictorial designs on early taverns, and commercial ones, not only made them more attractive to the eye but told the many who could not read what was for sale within. 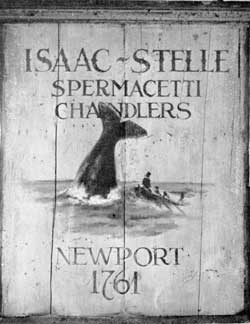 The Stelle Sign from Newport, R. I.: This side shows a whaling scene. And the reverse, a view of candle factory on the wharf at Newport.

Quite early in 1634 our Puritan fathers stipulated that the price of a meal would be sixpence, and a quart of ale or beer a penny. This regulation was posted on suitably illustrated signboards outside of establishments furnishing refreshment to passers-by.

By the time of King Philip’s War, 1675, Cotton Mather claimed in his writings that every house in Boston was a tavern. As all taverns and ordinarys had signs, there must have been considerable business in the painting of these boards. But very little is known of the artists. Their technique was decidedly primitive, and their crude but painstakingly executed designs were mostly copied from those in use in France and England.

Of the many taverns in New England frequented by seamen, ship captains, and other mariners, probably the one most patronized in Boston before 1776 was Vernon’s Head. Its signboard carried the portrait of Admiral Vernon in cocked hat and red coat, painted in profile.

The Little Admiral: In 1770, this stood before the Crown Coffee House at the nautical instrument shop of William Williams. Later, his successor, Samuel Thaxter, moved to State Street, taking his carved figure, about 4 feet high, with him.

This tavern was located on the corner of State Street and Merchant’s Row and carried a license until the beginning of the Revolutionary War. It was a favorite place for mariners to gather over their mugs of ale, and plan new voyages over the seven seas; voyages, perhaps that were concerned with privateering, sharp foreign trade, or a venture in black ivory.

Previous to the outbreak of hostilities between the mother country and the American Colonies, favorite subjects of signboard portraiture had been such English notables as Drake, Raleigh, Wolfe, and George III; but with the American Revolution these were pulled down and burned or repainted with subjects more in favor at the time. Portraits of Washington, Franklin, Greene, Putnam, and other American personages now appeared in their place and though primitive and stiff in technique were fairly good likenesses. They were not all executed by ordinary sign painters for we find evidences of where great portrait painters such as Smibert, Feke, West, and even Stuart, sometimes lent their talents to the painting of these pictorial boards.

Most of the tavern signs extant today were painted between 1800 and 1840. Waterfront tavern signs of about 1812 remind one that such hostelries were favorite recruiting rendezvous at the beginning of our second war with England. Ship captains were in the habit of making the taprooms their headquarters. Hand bills and broadsides were posted outside, similar to the following:

“All gentlemen sailors and others who desire to cruise for six months in the new Privateer Schooner Ranger, Captain Joshua Evans, Master, can meet this personage at the tavern of ‘The Ship Tavern’ where further particulars may be obtained.” 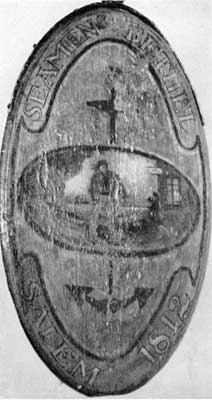 Seamen’s Bethel: The central horizontal oval shows a sailor with his duffel bag approaching this marine tavern. On the reverse is a finely gilded eagle similarly placed.

Further, the tavern was the first place repaired to after privateers had made port. Here; where citizens of the town were sure to congregate, the usual auction of ship and prizes took place.

Along with the tavern signs already mentioned, were those of a commercial nature. Firms established one hundred or more years ago now pay high prices for those early pictorial signs made for their business in its infancy.

An interesting example is that of Isaac Stelle, pioneer in the manufacture of spermaceti candles and mentioned in Starbuck’s book, Whale Fishery. In business in Newport, Rhode Island, in 1761, as a spermaceti chandler, he had a sign decorated on one side with a whaling scene and on the other with a view of his works on the wharf at Newport. This sign is now the property of the Mystic Historical Society, Mystic, Connecticut.

Among the early 19th-Century tavern signboards is the one which once hung over the Seamen’s Bethel in Salem, Massachusetts, in 1813. On one side is an oil-painted picture of a seaman, with his duffel bag under his arm, about to enter this tavern. The reverse side shows a beautiful gilded eagle in an oval with an anchor in the background.

A Carved Tavern Sign: The Grand Turk Inn was at either Mystic or Stonington, Connecticut. It was probably named for Elias Hasket Derby’s famous ship, which was one of the first in the China trade.

No less imposing and historic is the Commodore Perry sign from a tavern near Newport, Rhode Island. On one side it bears a portrait in oils of the Commodore with the inscription “Lake Erie 1813.” The other side has a figure of an American eagle with the same inscription. It is said that many a privateer captain signed on crews for ventures on the high seas in this tavern.

Although the eagle was the most popular motif on these marine signs, other subjects were used, such as ships, sea battles, naval characters, including Bainbridge, Decatur, Truxton, Somers, and many others. The age of early 19th-Century signboards is easily determined today by what seems to have been the universal custom of inscribing the date on each. Further, the paint on these signs seems to have been of a lasting quality for even with age and exposure most of them are still in good condition and retain their original brilliancy of color.

Not all signs were painted. Some were carved in bas-relief and decorated; others were in the shape of figures. A fine example of the latter, now in the Old State House, Boston, represents an Admiral of the Continental Navy. It once stood over the door of a nautical instrument maker’s shop on State Street and may have been the work of Simeon Skillin, who had a shop on one of the wharves nearby.

Also, in the Bissell Collection, Hartford, Connecticut, is a life-sized head of a Turk, with a square block below bearing the inscription, “Grande Turke Inne, 1789.” Suspended by a ring bolt, it hung over the door of a tavern so named in or around Mystic or Stonington. Ship figureheads from coastal wrecks were also pressed into service as signs by thrifty business men and innkeepers. 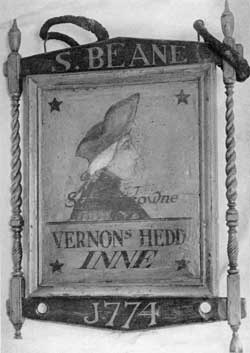 A Pre-Revolutionary Boston Tavern Sign: The Vernon’s Head was at the corner of State Street and Merchant’s Row. It was named for the English Admiral, Edward Vernon, whose capture of Porto Bello in the West Indies was an outstanding naval feat. Mount Vernon, the Washington estate, was also named for him.

Old signboards are rare today but they may still be found in out of the way places. Just recently, I stumbled across a fine pictorial one in an old barn in the country. Dated 1851, it showed a boat’s crew taking a whale. The inscription, still legible, stated that “John Shaw sells whalebone, oil, and ambergris.”

I have already referred to the lasting quality of the paint used on old signboards. Although many painters of signs purchased their necessary pigments from England, many of the colors were ground and mixed here from native sources. Clays, earths, and the like supplied many of the yellows, browns and reds; green, scarlet, and purple were produced from vegetable residues. Blue was almost without exception imported, as no sure source could be found in this country for it. Black was usually scraped, from, chimney interiors, while white was produced from a sour milk and chalk base.

These were indeed primitive efforts at producing paint colors. But their effectiveness would seem to have been proved by the fact that so many examples still extant retain their brilliancy of color to an amazing degree, considering the countless winter snows and summer rains that tested them through the years of their usefulness.