Flashback: Staffordshire and the Baltimore and Ohio

This article discusses the beginning of the railroad in the United States, especially the development of the Baltimore and Ohio, and notes the common misconception that the Staffordshire plates with railroad designs were of the Baltimore and Ohio railroad. It originally appeared in the December 1939 issue of American Collector magazine, a publication which ran from 1933-1948 and served antique collectors and dealers.

The Staffordshire potters, always eager for new designs, were quick to incorporate the locomotive, as it appeared first in England and later in America, in their scenic china patterns. The Baltimore & Ohio Railroad, our first and earliest railroad, was thus depicted upon the dark blue table, tea, and toilet sets, which were so popular in their day and so eagerly collected now. 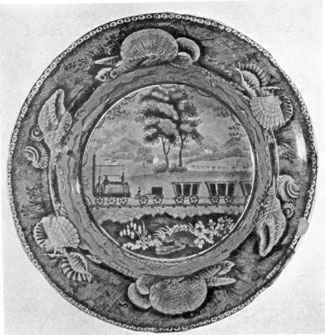 The Napoleonic Wars were indirectly responsible for the expansion westward of the young United States because they brought great demands for our raw materials and products. Prosperity followed and a boom in land speculation.

The Government had given large tracts around the Ohio and tributary rivers to the Continental soldiers who now began to sell their holdings. A large exodus from the stony farms of New England to the level plains of the West, where a livelihood could be more easily and profitably eked out of the fertile soil, promptly followed and had much to do with the improving and building of toll roads, steam vessels, canals, and railroads.

The Delaware and Hudson Canal, too, had been incorporated in April, 1823, when the Erie Canal was nearing completion, but its original object had been to build a canal from the anthracite coal fields of northeastern Pennsylvania to Roundout. In 1826 it laid down, as an accessory to its canal, its first railroad, an ingenious series of levels and inclined plains, extending from Carbondale, the heart of the coal beds, up over Moosic Mountains and down to the head of the canal at Honesdale.

On this stretch of roadbed, primarily for coal carrying, Horatio Allen, in August, 1829, operated the first steam locomotive, The Stoubridge Lion. It had been built by George Stevenson along the lines of the English type and brought in a sailing vessel from England.

But back of the opening of the Baltimore & Ohio Railroad lies the story of three cities and their struggle for the trade plums of the Middle West. These were New York, Philadelphia, and Baltimore. 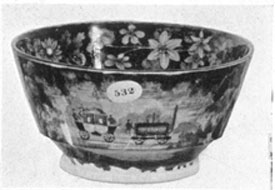 A "Lowell Railroad" Bowl: This small bowl, in deep blue, does not carry any potter's mark but is obviously of the same period as the B. & O. pieces.

The Erie Canal had been opened in 1825. Traffic to and from the West began to loom large and increased yearly in importance. New York became the great center of trade, gaining over Baltimore, then the third largest city, because the newly opened canal made possible easy transportation and cheap freight rates to the seaboard, which Baltimore could not furnish.

Philadelphia, too, was after the profitable western trade though her difficulties were far greater than those of New York because of the obstructions of rivers, valleys, and high mountains. Yet beyond the great barrier of the Allegheny Mountains were the headwaters of the navigable Ohio, leading straight toward the father of all rivers, the Mississippi, and a new land.

Undaunted by the practical difficulties confronting them the Philadelphia fathers set about to create a pathway across their state, which like the new Delaware & Hudson should be a combination of canal, level railroad and toll highways.

Thus began what was eventually to be the Pennsylvania Railroad. Against these new pathways of the cities, which were its commercial rivals, what had Baltimore to offer other than the National Road? And what was it compared to the Great Erie Canal or the project of canal and railroad upon which Pennsylvania had embarked.

The highway, known as the National Railroad, and sponsored by Thomas Jefferson as a means of developing the interior country by making it accessible to the Atlantic Coast, had started at Cumberland, Maryland, in 1808; was finished as far as Wheeling by 1818, and so on to the Ohio where innumerable craft were plying that river and its tributaries. There early in the first decade Nicholas Roosevelt had built the first steam vessel. The merchants of Baltimore, which was practically the Eastern gateway to the highway, had enriched themselves bartering in flour, tobacco, and other products. But now something more than this highway was necessary. 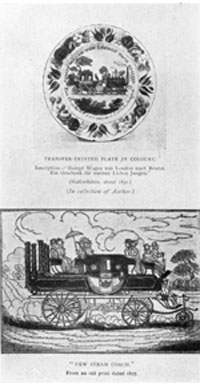 The So-Called B. & O. Plate: In Hayden's CHATS ON OLD EARTHENWARE, from which this illustration is taken, it is entitled, in German, "Steam Carriage London to Bristol." Thus this is obviously an English railroad scene and not American.

The citizens, knowing what other groups in other sections were planning, decided to incorporate and build the Baltimore & Ohio Railroad, since wealthy families had already begun to leave Baltimore because of its declining trade. Discussions were held almost daily in the beautiful Exchange, depicted on Staffordshire dishes as the “Baltimore Exchange,” regarding a thing called a railroad, something now known on both sides of the Atlantic.

The first discussion which led to action was held at “Belvedere,” Baltimore home of Col. John Eager Howard. Evan Thomas, just returned from England, had seen there the Stockton & Darlington Railroad, upon which coal trains were being drawn by cumbrous engines from mines to coal docks and there unloaded. Philip E. Thomas, brother of Evan, was president of the Merchants Bank and through his position and money the Baltimore & Ohio was started, he becoming its first president.

Then at the home of George Brown, another banker, a meeting of some twenty-five influential business men was held on February 2, 1827. Shortly after it was agreed to build a “double railroad” between Baltimore and some city on the Ohio. At the end of that month a charter was granted by the Legislature and the States of Virginia and Pennsylvania. The public was allowed to subscribe and money poured in. Many doubled their subscriptions without realizing what a railroad was.

The corner or “first stone” was laid July 4, 1828, by Charles Carroll of Carrollton, last surviving signer of the Declaration of Independence.

On January 1, 1830, distinguished citizens and officials made the first run in carriages drawn by a single horse. For although the steam engine was coming into use the Baltimore & Ohio was satisfied to begin with horsepower, and even considered the use of sails as on ships. Soon all Baltimore clamored to ride. A regular schedule was started. Trains ran three hours in the morning and two hours in the afternoon, weather-permitting, the first instance in the United States of operating for public use.

The opening of the completed line of thirteen miles took place May 24. A great day of celebration! Horse-drawn cars were used, looking like neatly paraded shanties on wheels. On the trip Peter Cooper, New York merchant, discussed steam engines with the president and directors and received permission to build an experimental American machine to try out along the Baltimore & Ohio tracks. 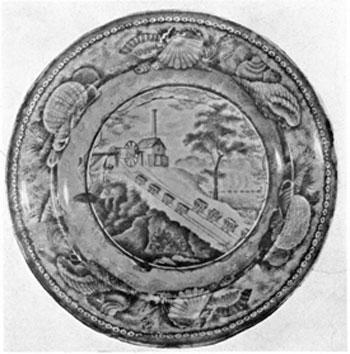 The B. & O. Incline View: This is a 9 1/4-inch plate in dark blue and bears the mark of Enoch Wood of Burslem.

In due time the Tom Thumb was ready for trial. Attached to this little engine was an open car carrying a few of the directors. The small engine took the grades with ease and traversed the curves without reduction of speed at the incredible rate of fifteen miles an hour. The result of this trip and reports of the success of steam locomotives in England brought about the decision to use locomotives instead of horses from then on. The Baltimore & Ohio was a pathfinder. After its successes, other railroads followed its example.

Evidently from the description of the trip of the coaches behind the Tom Thumb, collectors, not knowing what the engine looked like, ascribed the name Baltimore & Ohio to the picture found on tea sets, showing an entirely different type of engine. The English engine had a large, high steam pipe in front belching forth smoke and another shorter one in the same act. The engineer stands in the rear. A stagecoach with passengers facing each other, baggage above, a man on top with his back toward the engine and below one facing forward.

This view was put on a tea set, a teapot, slop bowl, sugar box, creamer, and cup and saucers and is far from common. It has been in the best collections of Historical Staffordshire and I bought a slop bowl myself from the Admiral Dickens collection when the latter was withdrawn from the Smithsonian Institute in Washington.

All the authorities call this view “Baltimore & Ohio,” though usually with a question mark. But now we may bar it definitely from American Historical views for I discovered an illustration of it less than a month ago in Arthur Hayden’s Chats on Old Earthenware. Marked under the glaze in German which I translated, “Steam Carriage from London to
Bristol” and beneath the picture, also in German, “A gift to my dear son.” This was evidently a special order.

By December, 1831, the Baltimore & Ohio was open for business over a length of 61 miles from Baltimore to Frederick, Maryland, and in 1835 was extended south to Washington. A picture of the first locomotive to enter the nation’s Capitol is in the possession of the Baltimore & Ohio Railroad. It was called the Atlantic and was such a fine piece of machinery that after it was no longer in passenger service it was still useful for switching purposes for more than forty years.

A Set of Baltimore & Ohio Teacups: Made by Enoch Wood & Sons, these show the engine and one passenger coach.

Railroad ChinaRailroad china, like railroad silver, was a product of the boom in comfort …