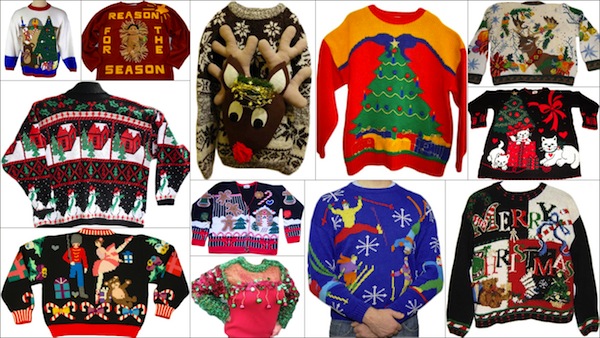 Every December, people of all stripes make the rounds of their neighborhood Christmas parties decked in their ugliest Christmas sweaters (see our list for 2012 here). Prizes are often offered at these seasonal soirees for the tackiest v-neck or wool knit, sparking fierce competition among family and friends.

If you haven’t snagged your piece of atrocious holiday outerwear yet, we know where you can glory in the gaudy, revel in the revolting, and win that coveted prize: our ugly Christmas sweaters page. In honor of the 12 days of Christmas, we’ve ranked our favorites from best to worst (or is it the other way around?). So pop a dramamine, sit back, and enjoy. Some are still for sale, but hurry: with looks this ugly, these sweaters won’t last. 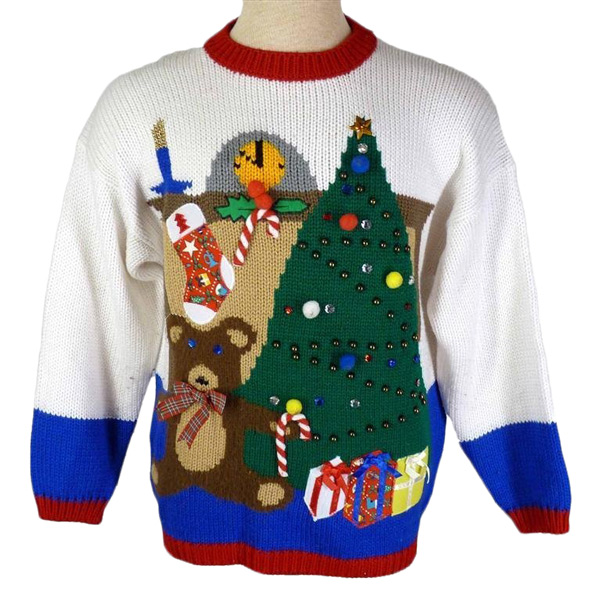 12. One of the hallmarks of a truly ugly Christmas sweater is three-dimensionality. In the case of this vaguely patriotic 1980s beauty from Bravo, bows, beads, pom poms, and fabric candy canes protrude from the sweater’s acrylic knit surface. If only that mantel clock actually worked.

11. Here’s a handsome blue crewneck from Traditional Trading Co. that signals your holiday spirit and fondness for skiing, even if that means occasionally doing so upside down. Apparently, snowboarders know better than to wear a garment as tacky as this. 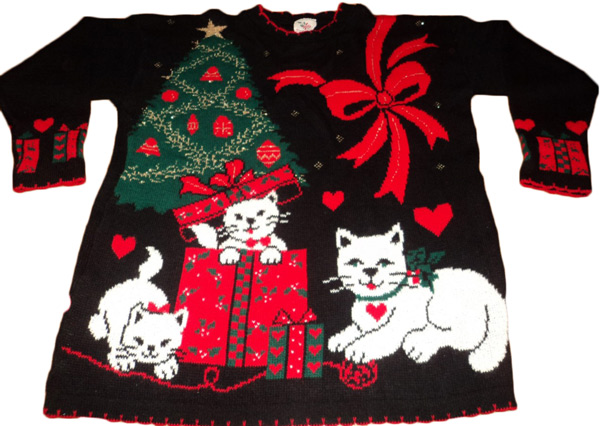 10. Awww. What could be cuter than fluffy white kittens playing with a ball of ribbon and an open Christmas box? How about anything. 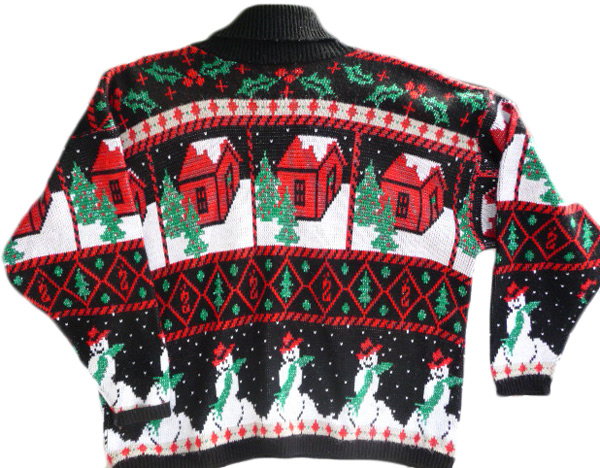 9. This mock turtleneck from Cabin Creek proves that even the most innocuous imagery (a snowman in a hat, and cabin in the woods) can get deliciously ugly when it’s repeated enough. 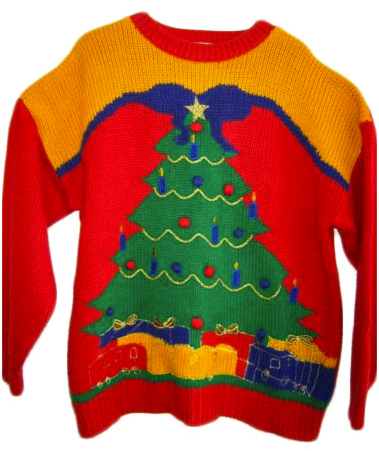 8. Hillary and Paige is the company that’s blamed for this extra-large acrylic knit billboard. The tree is accented with pom poms, and that’s real fake gold stitching on the gifts. 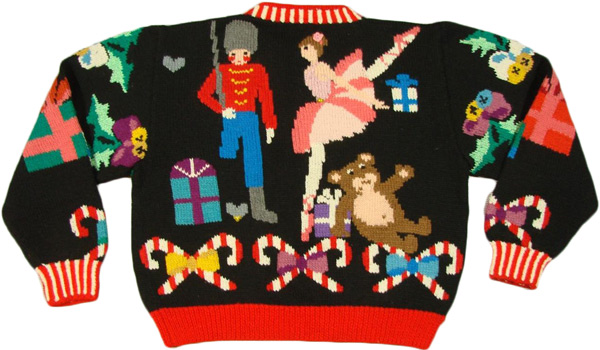 7. This Berek from the 1980s teeters into ugly land because its imagery is so saccharin, and if it causes you to get Tchaikovsky stuck in your head, all the better. 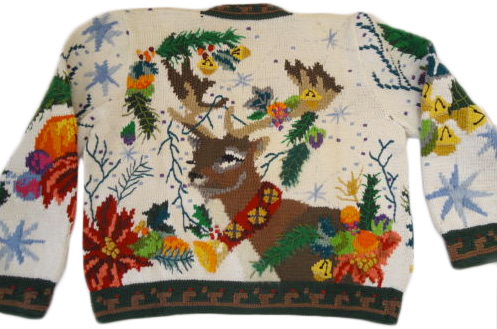 6. Another Berek cardigan: not advised for wearing out of doors during hunting season. 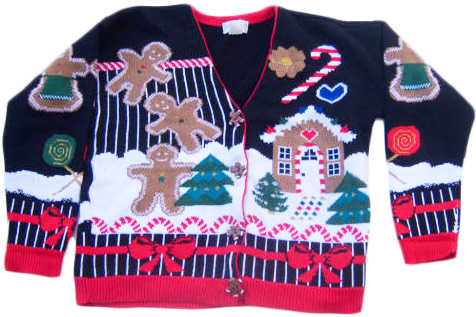 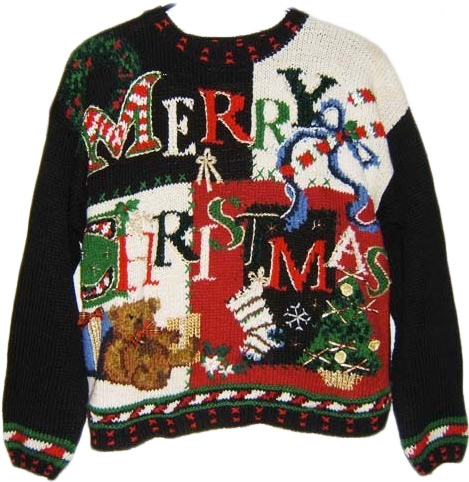 4. This fashion catastrophe from Tiara International has a nice balance of ugly and traditional style. Gotta love all that black; so cheerful for the holidays. 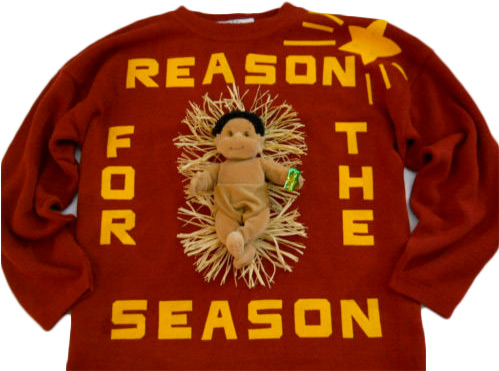 3. This is what the Christmas is all about: a three-dimensional “Baby J” doll on the front of a maroon sweater, surrounded by text and a star that’s all weirdly similar to graphics used on propaganda posters in the old Soviet Union. Be careful not to impale your loved ones on the spikes of straw when you give them that seasons-greetings hug. 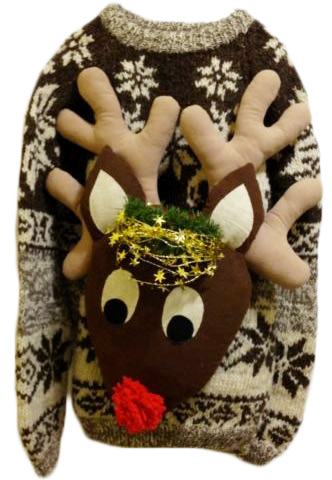 2. Perhaps the most important genre within the ugly Christmas sweater universe is the mildly ugly sweater that’s been upgraded to resoundingly tacky by attaching stuff to it. In this case, a red-nosed reindeer with a crown of stars surrounding a clump of what appears to be Astro-Turf will buldge from the belly of whoever is crazy enough to wear this wool nightmare. 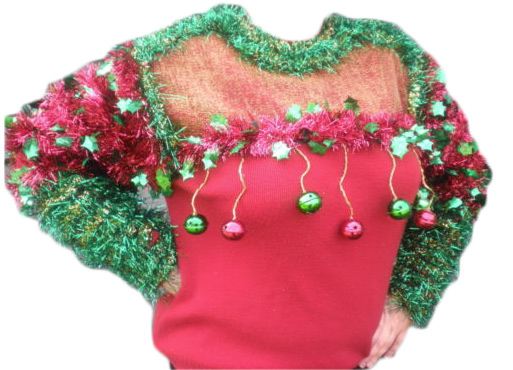 1. Finally, this testament to tinsel has everything: gold mesh, garlands galore, green and red bells dangling from the chest, lights, and it even plays “Jingle Bells,” as if it’s visuals weren’t already loud enough. Congratulations!

Yarn Bombs: In the '70s, Knitting Was Totally Far OutDon’t Give Them Plastic: 40 Vintage Gift Ideas For People Who Are Sick of Crap