Flashback: The Chest of Drawers and Changing Style

This article discusses the evolution of American chests of drawers, particularly their origins and the design styles, from Victorian to Greek Revival. It originally appeared in the April 1945 issue of American Collector magazine, a publication which ran from 1933-1948 and served antique collectors and dealers.

About a hundred and seventy-five years marks the span when the chest of drawers was being made by American cabinetmakers. During this time, step-by-step, the transition was accomplished from its predecessor the Hadley chest to the chest of drawers of the Greek Revival period. 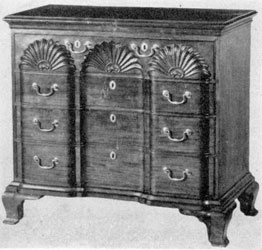 An Elaborate Block-Front Piece: Made of mahogany by John Townsend of Newport, Rhode Island in 1792. Carving, shaped drawer fronts, and molded bracket feet show that stylistically it is a survival of the Chippendale era.

Then came the Victorian years when, except for some instances such as the work of John Belter, all furniture was factory-made and the individuality in design and execution of the master craftsmen was lost. Some of the first examples of factory furniture may now have been in existence up to ninety years but passage of time cannot erase the earmarks of quantity production and the defects of machine-made parts. 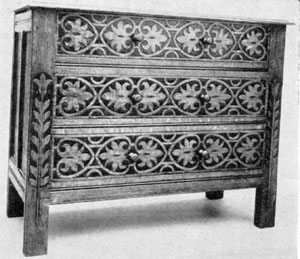 Made Between 1675 and 1700 of Oak: This with its three drawers is a chest of drawers, yet the stile and rail construction and flat carving of conventional forms relate it to the Hartford and Hadley chests.

Therefore, this discussion will be confined to the chest of drawers as made in America with hand tools and by journeymen cabinetmakers. Such men followed the prevailing styles but flavored them with their own interpretations and adaptations. Therefore the chests of drawers they made had individuality, whether they were sophisticated town pieces or simple ones made in small villages for a farmer clientele of plain tastes and limited purse.

Judging from the few examples that have survived, the first chests of drawers were made between 1675 and 1700. These were directly evolved from the carved oaken chests made by Nicholas Disbrowe and his New England contemporaries. They were of stile and rail construction and bore the same flat conventionalized carved decoration but the upper chest part with its hinged top had disappeared. These new pieces were now frameworks into which were fitted three full-width drawers, placed one below the other. 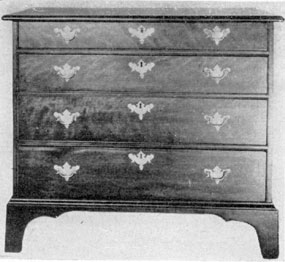 Early and Simple Chippendale: This chest of drawers by a nameless cabinetmaker of Fall Village, Connecticut is of the Chippendale era, though the bracket feet and moldings are severely plain. Made of maple, the drawer fronts are of curly grained wood.

Meanwhile a new and short lived style appeared in England known as William and Mary. It reached America about 1690 and represented as much of a revolution in its way as did the sovereigns for whom it was named. The effect on chests of drawers was marked.

Gone was the panel, stile, and rail plan, the conventionalized carving, and the downward extension of the framing members of the four corners. The drawer openings were outlined by single or double half-round moldings, giving the effect of horizontal panels one below the other. Turned bulbous feet were made fast by driving the small end into holes bored at the four corners of the body. Cabinetmakers now began to notice the beauty of grain to be found in the native hard and soft woods and to make the most of it. 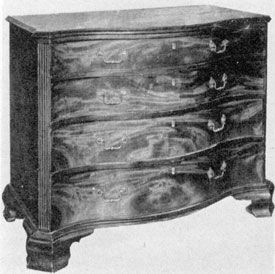 Philadelphia Chippendale by Gostelowe: This serpentine-fronted chest of drawers of mahogany with chamfered and needed front corners and shaped bracket feet shows how Chippendale designs could inspire the gifted cabinetmakers of Philadelphia.

In fact, in the rural areas furniture makers were just getting used to the William and Mary style when that of Queen Anne made its advent in the sophisticated centers about 1725. Again there was change in design and construction. With the chest of drawers the bulbous feet were replaced by short but gracefully shaped cabriole legs. 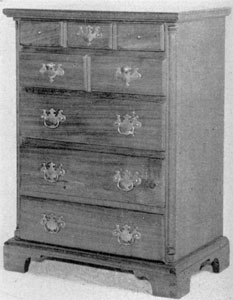 Tall Chippendale Chest of Drawers: Made of walnut and unornamented except for applied half-round columns at front corners and the over lapping molding of edge of drawer fronts, this is a plain piece of small size. Probably made in Pennsylvania about 1760-70 by a village cabinetmaker.

The finish for the front was achieved by constructing the drawer fronts with a quarter-round lap which concealed the space between drawer and opening. The top and bottom of the carcass was finished with a cornice-like molding. Native hardwoods such as maple and walnut were used for the parts that could be seen and soft woods for the rest. Some simple country chests of drawers were entirely of pine, spruce, white wood and other easily worked lumber. 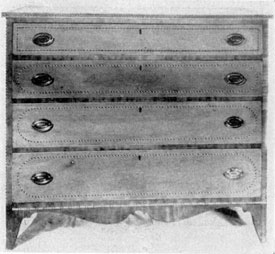 A Hepplewhite Chest of Drawers: The consistent use of two-color bands and ovals of inlay, the French foot and shaped apron beneath the lower drawer, show how widely the Hepplewhite style was followed.

American craftsmen and their clients apparently felt they had had enough change for a time and the Early Georgian style of England was practically ignored here. As a result the next change of style was directly to the age of Chippendale.

Under the impact of his book of furniture plates, The Gentleman and Cabinet Makers Director, first published in London in 1754 and soon well known in America, chests of drawers in the Chippendale manner began to be made here early in 1755 or 1760. They continued to be the accepted style until after the close of the American Revolution. 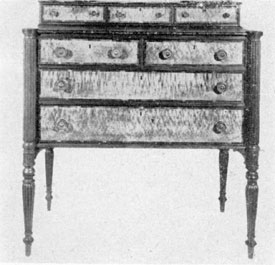 The Sheraton Style as Made in America: This chest of drawers bears the label of Levi Ruggles who worked circa 1795-1810 and had his cabinetmaker's shop in Boston.

Such chests of drawers had either plain or molded bracket feet or short carved claw and ball feet. With some the front was serpentine; in many there was carefully done carving on both the structural frame and the drawer fronts.

Also many had vertically reeded front corners or inset quarter-round columns with nicely executed bases and capitals. A few American Chippendale chests of drawers were made of maple, cherry or yellow birch but the favorite woods were walnut and mahogany with the more sophisticated pieces oftener of the latter than not. 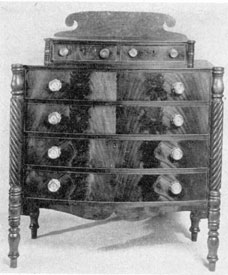 An Empire Chest of Drawers: Of mahogany with drawer fronts characteristically of crotch-grain veneer, this piece when in the Warren Cramer Collection was attributed to Joseph Cushing who worked in Boston about 1820.

Between 1780 and 1790 the chaste and delicate style of Hepplewhite found favor in America and was duly reflected in the chests of drawers. Here the bracket or claw and ball foot was replaced by the French foot that curved slightly outward and was connected in the front by a valanced apron. 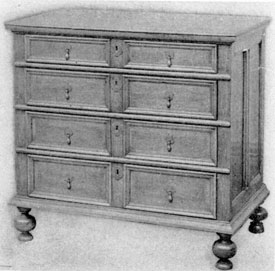 Early William and Mary Example: Made in New England circa 1690-1700. Although the wood is still oak, the absence of carving, use of moldings, arrangement of four drawers, each slightly deeper than the one above, and the turned bulbous feet are all characteristic of the William and Mary period in American furniture.

Decorative effect was achieved by lines and ovals of inlay in woods of contrasting colors. And while mahogany continued to be a prime favorite, a great deal of satinwood veneer was used, especially for drawer fronts. Where this was too costly curly or bird’s eye maple was substituted.

Hepplewhite designs lasted about a decade and then came those of Thomas Sheraton. Here the chief change was the turned and reeded leg and column, all but disengaged at the front corners, which replaced the French foot.

Also many chests of drawers were made entirely of mahogany and toward the close of the period, some were fashioned with a mirror attached by scroll supports which were anchored in the top at the back. 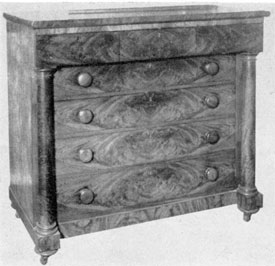 About 1820 came the beginning of the end, artistically at least, since it brought in the American Empire which from the start was heavier and less delicate in details of both design and decorative carving.

Mahogany was the principal wood used and many tops, drawer fronts and sides were of rich crotch-grained mahogany veneered on native American soft woods, chiefly white pine. The front feet were carved to simulate animal paws and there was a pair of half-round pilasters surmounting them. If these were carved, the pineapple and acanthus leaf were favorite motifs.

Twenty years of American Empire resulted in more bulk and less carving to be followed by the Greek Revival style, inspired as the name indicates by the architecture of ancient Greece. In this new style the chest of drawers, made almost entirely of crotch-grained mahogany veneer, generally had columns at the front corners but the carved paw feet were replaced by turned ones generally higher than wide. In other words, the chest of drawers had taken on the outlines of a Grecian temple with the peak roof above the frieze omitted.

DressersFrench and Victorian style dressers were often small, typically having only…