Made for Misfits: The Colorful History of the Black Leather Jacket 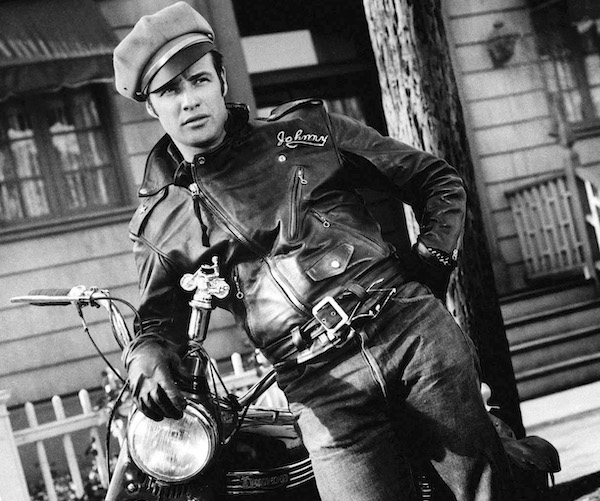 Marlon Brando inspired a slew of malcontents in 1953 as biker-gang leader Johnny, as in this still from the movie "The Wild One." Wearing a Schott "Perfecto" jacket, Brando launched a style that would influence biker, greaser, punk, and leather subcultures led by youth disaffected by American culture in the wake of World War II.

Marlon Brando inspired a slew of malcontents in 1953 as biker-gang leader Johnny, as in this still from the movie "The Wild One." Wearing a Schott "Perfecto" jacket, Brando launched a style that would influence biker, greaser, punk, and leather subcultures led by youth disaffected by American culture in the wake of World War II. 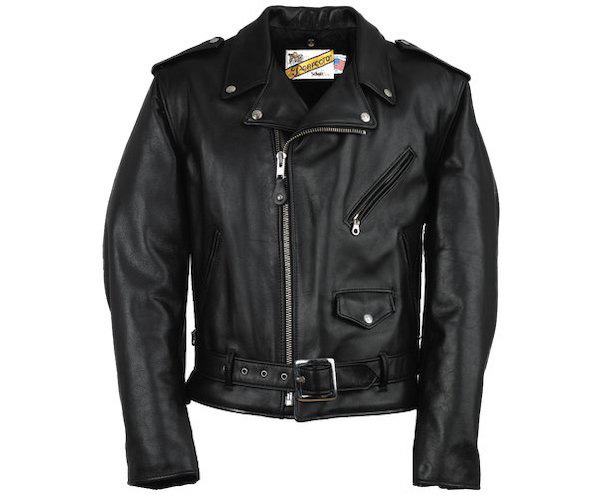 The classic Schott “Perfecto” is outfitted with an off-center zipper and a slim belt at the waist. In 1928, New York designer Irving Schott developed the style, which reigned as the ideal black leather jacket silhouette for decades. (Via Schott) 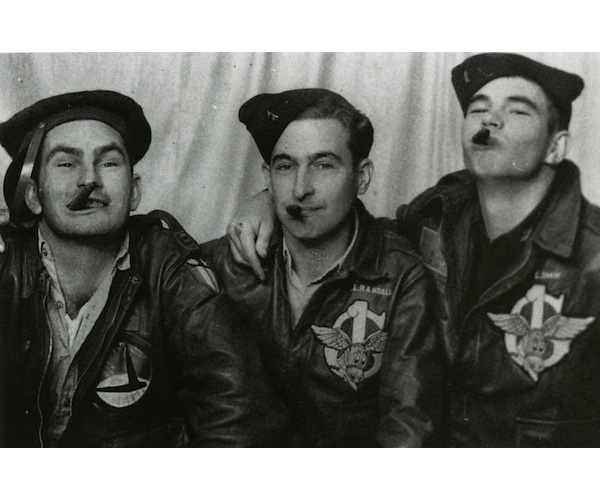 During World War II, A-2 leather jackets were issued to bomber pilots and crewmen serving in the U.S. Army. The servicemen would have the backs of their jackets painted with pin-up girls, cartoons, or mission tallies. 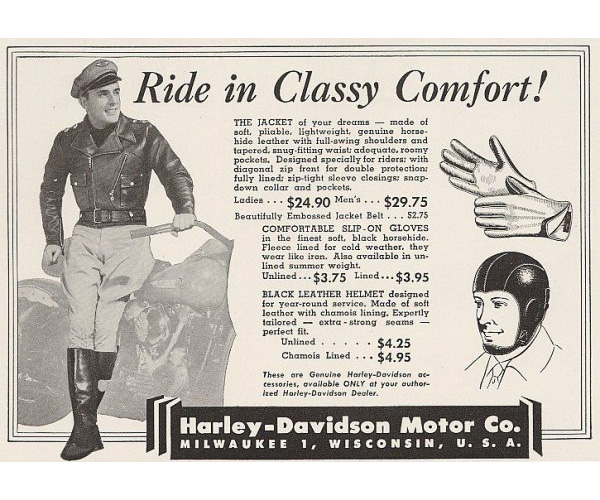 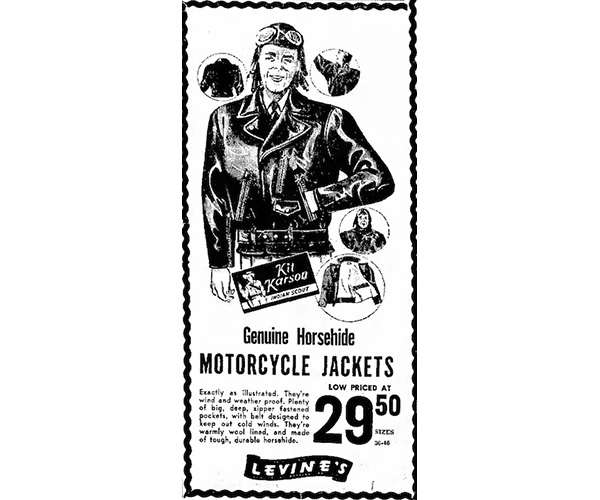 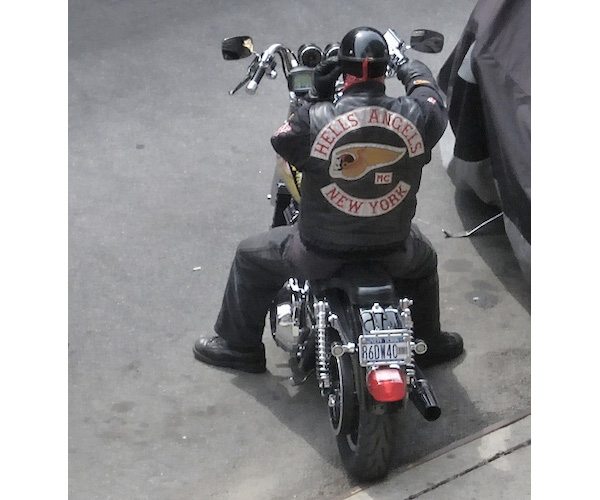 Members of the notorious motorcycle club Hells Angels have been riding Harleys and sporting Harley jackets—usually with the club's logo patch sewn to the back—since its founding in 1948. This Hells Angel was photographed in New York City in 2009. (Via WikiCommons) 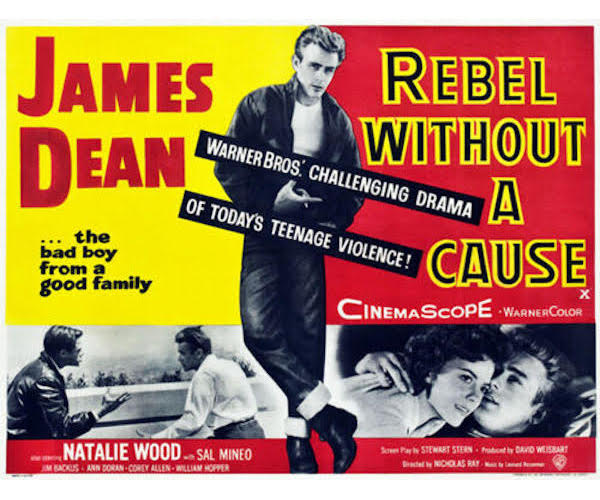 James Dean further perpetuated the appeal of rugged rebellion as Jim Stark in 1955's "Rebel Without a Cause." While the film was meant as a cautionary tale about moral decay among American youth, Dean's tragic death before the film's release solidified his status as an outsider icon. 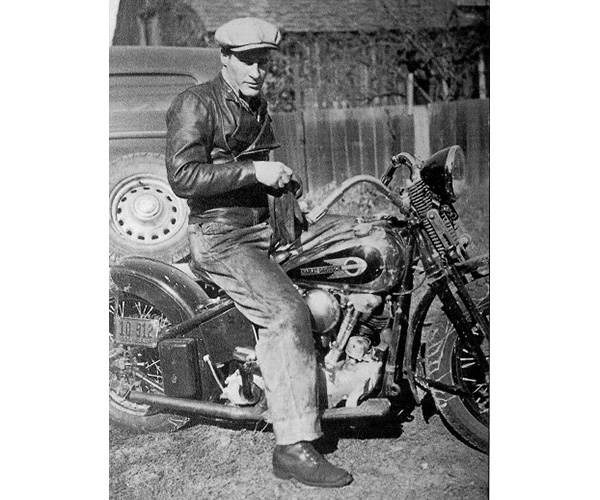 Tom Sifton was a major figure in the history of motorcycle racing. He developed the fastest Harley Davidson engine and later opened a bike dealership in San Jose, California. 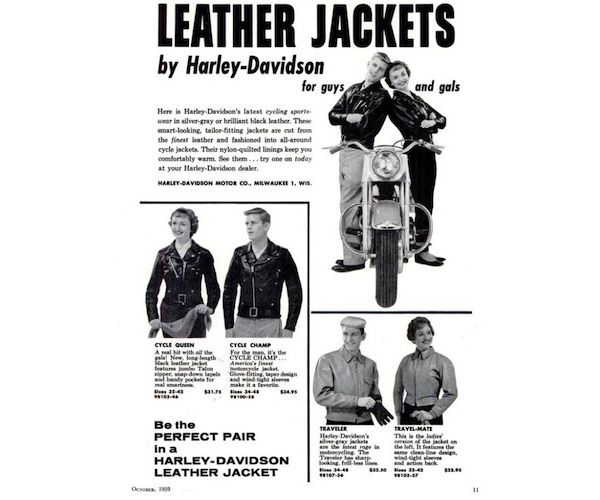 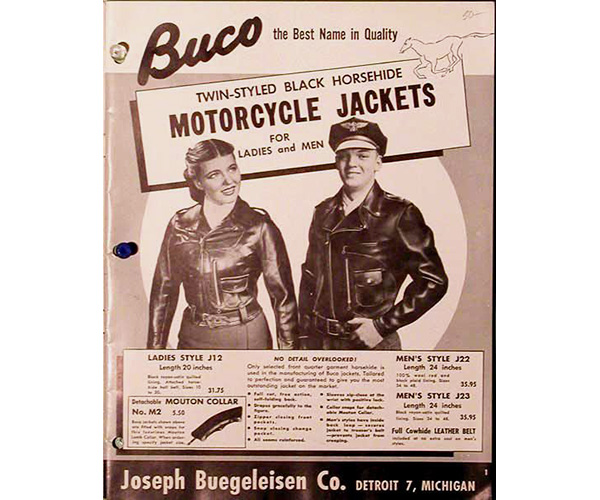 Joseph Buegeleisen Co. in Detroit—called Buco after 1940—specialized in leather goods and also became one of the largest motorcycle-accessory companies in the U.S. 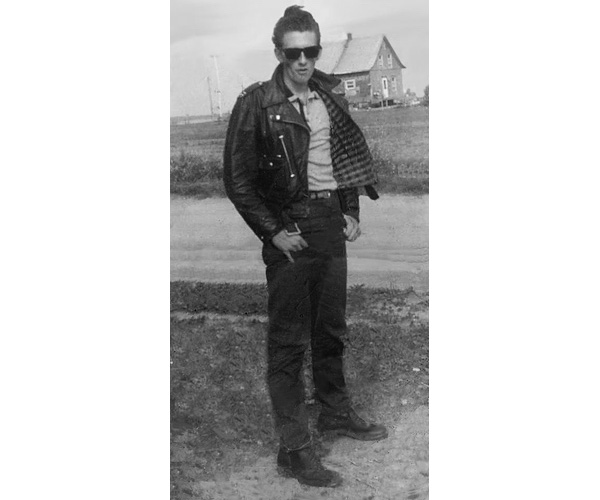 Greasers reigned in poor, working-class neighborhoods in the 1950s, often outfitted in leather and flannel, before the look became a hipster novelty. Some greasers—who got their name because they slicked back their hair and worked on motorbikes or hotrods—were members of outlaw biker or street gangs, but not all. This 1960 photo shows young Michel H. Beaudoin, a greaser in Quebec, Canada. (Via WikiCommons) 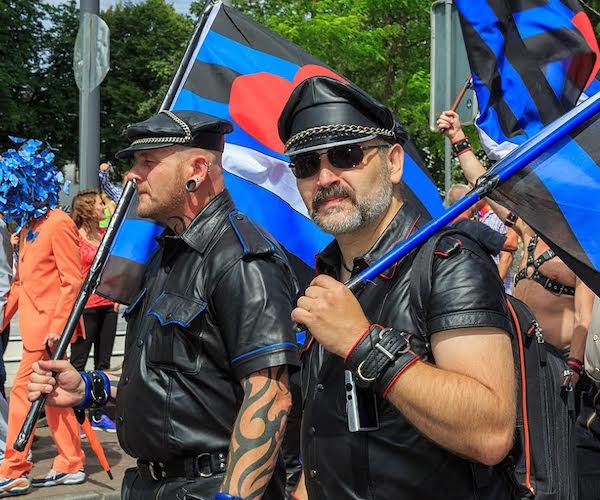 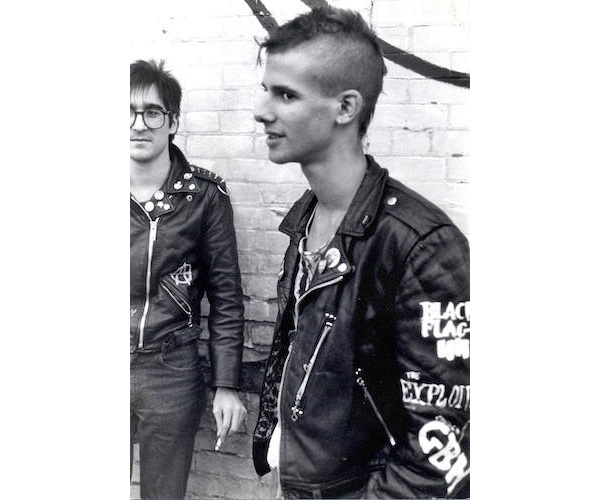 Young punks personalized (and politicized) their leather with studs, buttons, and patches. This photo was shot in Evansville, Indiana, in 1984. (Photo by Tim Schapker, via WikiCommons) 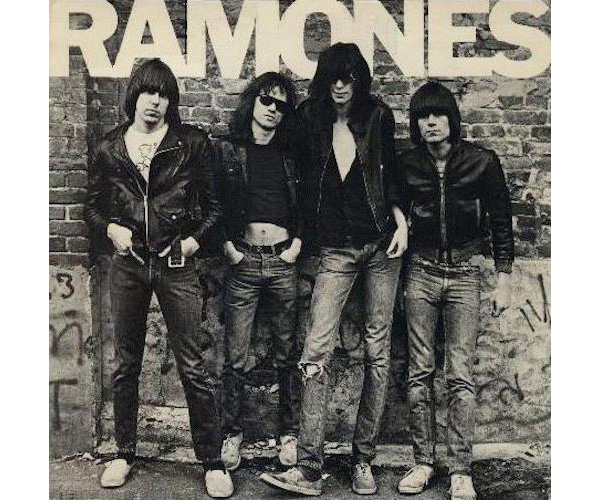 The Ramones collectively embraced black leather as a signifier of countercultural ingratiation. They all wore black leather jackets on the cover of their 1976 self-titled debut album. 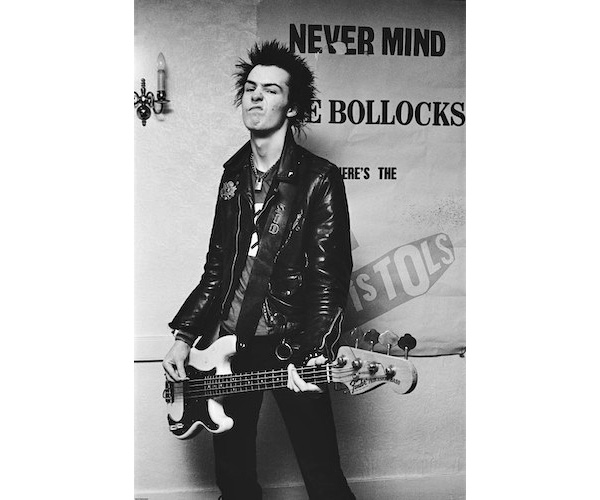 Many young punks took style cues from Sid Vicious, bassist and vocalist of the Sex Pistols, who were outfitted by designers Malcolm McLaren and Vivienne Westwood. His violent, drug-addled life embodied the chaotic nihilism of the U.K. punk movement. (Poster via Amazon) 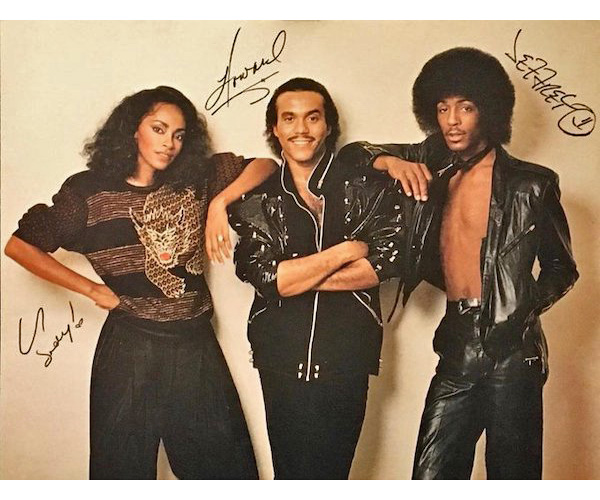 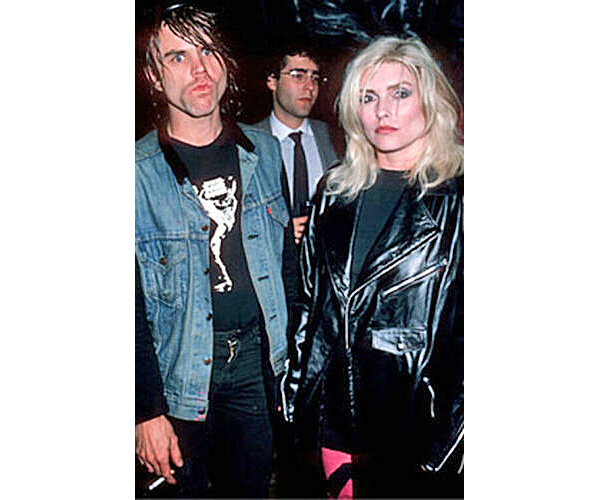 Blondie’s Debbie Harry was the epitome of cool in the 1970s and ’80s. Here, she sports a leather jacket created by punk-designer Steven Sprouse especially for her. 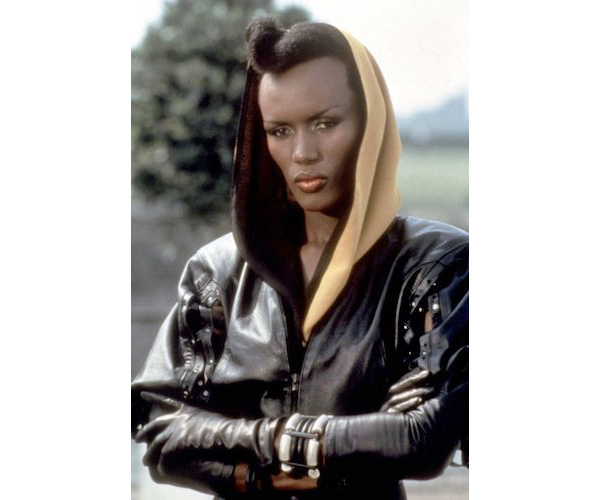 Grace Jones was, hands-down, the most badass Bond girl in history—as the supervillain's henchwoman May Day in 1985's "A View to a Kill." May Day, like Jones herself, became a fashion icon. 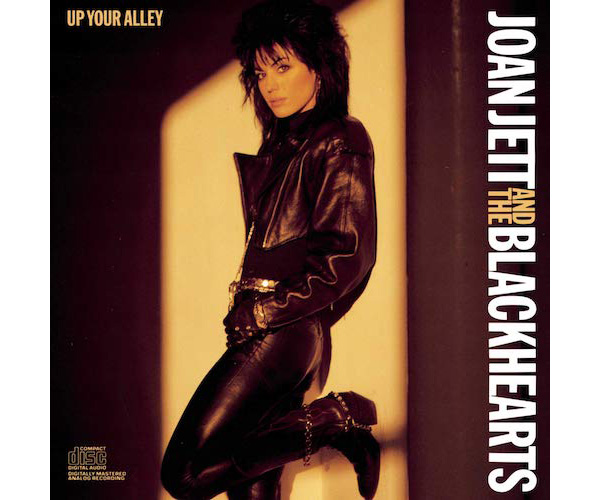 Joan Jett, pictured on the album cover of 1988's "Up Your Alley," absolutely nails the formidable aura of an untouchable babe. She first co-founded the all-girl rock group The Runaways as a teenager in the mid-1970s. In 1981, Jett sang "Black leather, I'm gonna wear it to my grave ... Just the feel of it on my flesh makes me, feel wild, feel possessed." 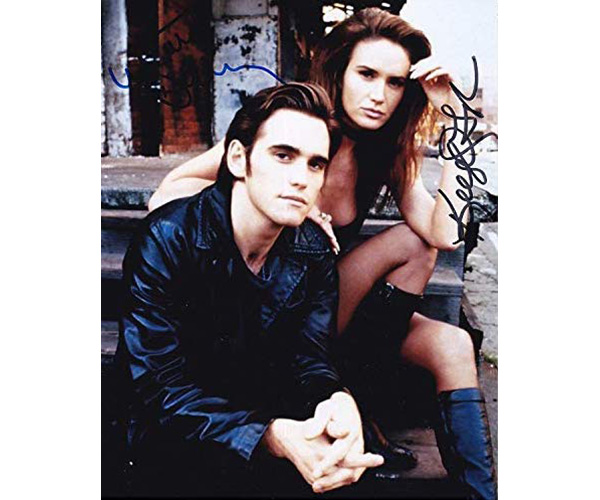 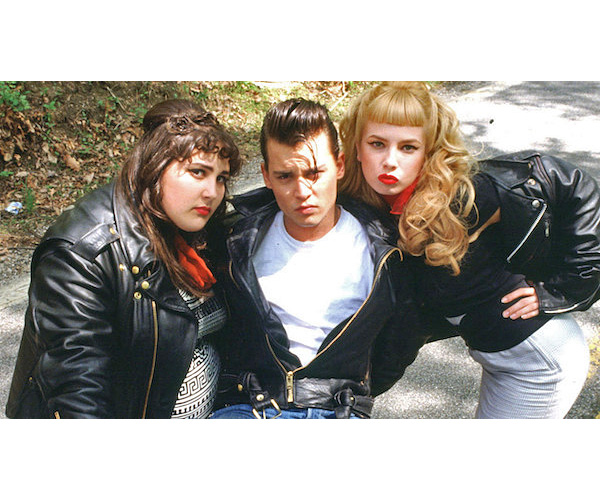 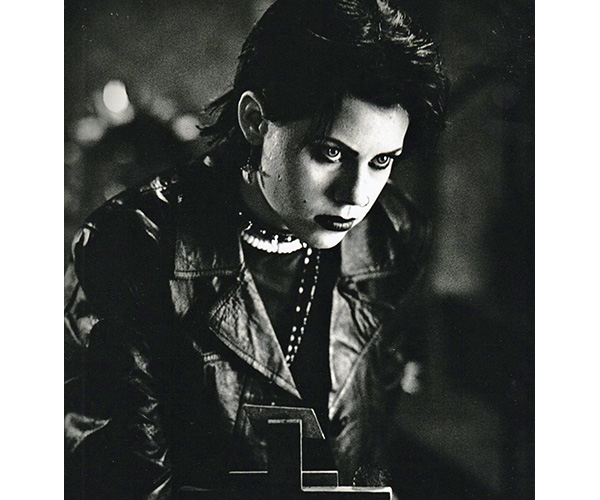 Actress Fairuza Balk joined the ranks of sneering nonconformists in leather. In 1996's "The Craft," her Nancy Downs was a teenage witch consumed by black magic, as symbolized by her goth, leather wardrobe. 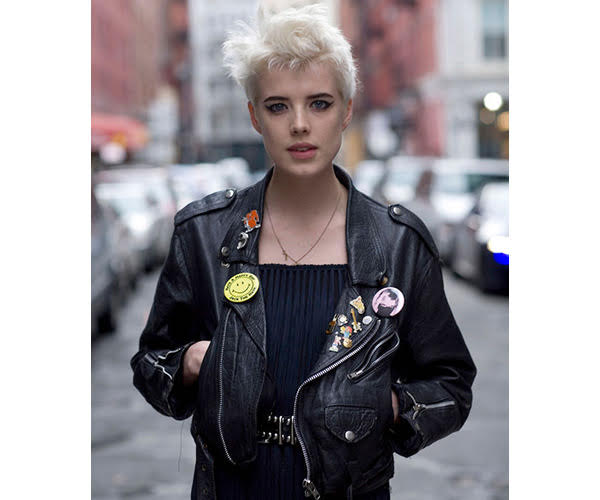 Model-singer Agyness Deyn embraced the accessories and androgyny known to punkers of yore in this contemporary leather look for her 2008 music video, "Who" with The Five O'Clock Heroes, shot on the streets of Chinatown in New York City. (Photo by Myrna Suarez/Getty Images)

Before the black leather jacket was reduced to another innocuous darling of the fashion world, it was an honored utility—a form of arthropod armor worn by the less-than-gentle men who roamed the fraying fringes of a disquieted society. The original BLJ silhouette, in fact, was donned by German fighter pilots in both World War I and World War II. Throughout the 1930s and ’40s, the U.S. military followed suit, as leather jackets became standard uniforms for both American troops and police officers. However, it would not be long before the citizenry and street urchins seized and subverted this talisman of authority.

“Leather-laden outlaws struck fear into the hearts of civilians and cops alike, as they tore through towns with gleeful irreverence.”

Bikers were the first outsiders to take note of the black leather jacket’s utilitarian value, as their inevitable brawls with gravel meant wearing road rash on their leather rather than their comparatively feeble flesh. In 1928, New York designer Irving Schott introduced the “Perfecto,” a zipped and belted hunk o’ hide that reigned as the ideal BLJ silhouette for decades to come. As Schott’s design was originally distributed by Harley-Davidson, the “Perfecto” soon became the saucily soiled flag flown by the most vicious of motorcycle gangs, most notably, the notorious Hells Angels.

In Hunter S. Thompson’s journalistic inquiry into the infamous biker gang, he writes, “The farther the Angels roam from their own turf, the more likely they are to cause panic. A group of them seen on a highway for the first time is offensive to every normal notion of what is supposed to be happening in this country; it is bizarre to the point of seeming like a bad hallucination … and this is the context in which the term ‘outlaw’ makes real sense.” 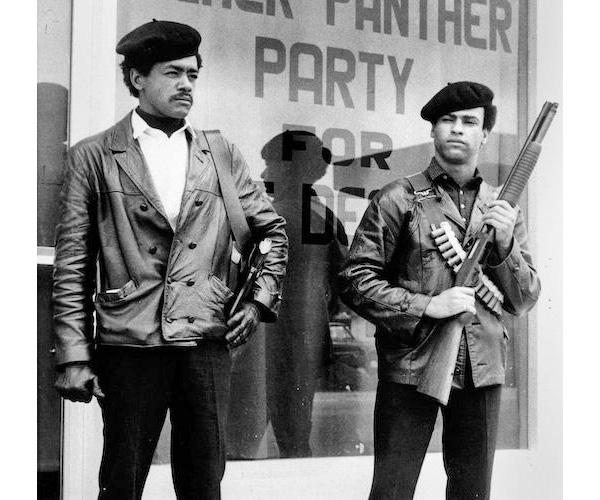 Indeed, the leather-laden outlaws struck fear into the hearts of civilians and cops alike, as they tore through towns with gleeful irreverence. In 1953, the fearful image of the motorcycle gang was cinematically packaged in Laslo Benedek’s “The Wild One,” led by a young Marlon Brando. Aptly encased in Schott’s “Perfecto,” Brando mimed the sexy saunter of a biker-gang leader with magnetic ease. Hence, the black leather jacket was nationally broadcast as rebel-youth emblem, and Brando was dubbed a big-screen bad boy.

Following its Hollywood emergence, the black leather jacket arguably lost some of its sting as it was co-opted by throngs of suburban kiddies looking to sharpen their manicured, mundane, “Leave It to Beaver” lifestyles. However, its subversive edge was maintained on the outskirts, among working-class greasers and, later, by members of the Black Panther Party. As the all-too-harmless hippie movement was relegated to the ’60s, punk rock became a refuge for the battered batch of disillusioned youth in the decade that followed. Righteously ripe with hostility and nihilism, early punkers like Joey Ramone and Sid Vicious (guided by punk’s sartorial godparents, Vivienne Westwood and Malcolm McLaren) were quick to embrace the leather hide of the outsider. And so, the torch was passed. However, this time around, the BLJ finally found favor among women. Joan Jett, Debbie Harry, and Patti Smith, among other female musicians of the moment, relished the utility of the androgynous leather armor.

Perhaps the lingering drip of danger and callousness embedded in a dirty, well-worn black leather jacket is what makes its character so seductive. Perhaps the illusion of elusiveness granted to the wearer is what inspires its unisex appeal. Whatever it may be, it seems rather fitting that the BLJ found its way to the sexual fringes. Initially inspired by the aforementioned hunks on Harleys, gay leather clubs emerged in the late ’50s and continue to flourish. Of course, leather is also often associated with kink, fetishism, and S&M within the greater BDSM community. In 2019, black leather remains a staple at any gay pride parade, regardless of how participants identify, sexually and/or gender-wise. In this sense, the leather menace continues to drape the shoulders of those that make the squares go aquiver. 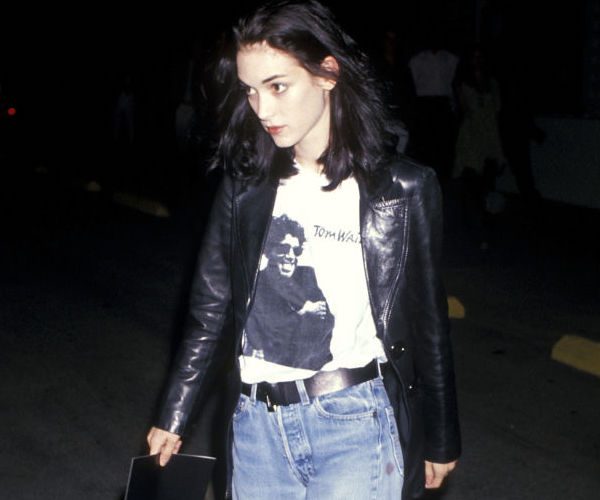 Winona Ryder took the leather look into the ’90s with style and grace, as seen at “The Commitments” premiere on August 7, 1991, at Pacific’s Cinerama Dome in Hollywood, California. (Photo by Ron Galella, Ltd./Ron Galella Collection via Getty Images)

Hollywood's Leading Motorhead: For Steve McQueen, Racing Motorcycles Was No ActBehind the Scenes With Janis Joplin and Big Brother, Rehearsing for the Summer of Love