Diablitos in the Details: The Curious Tale of Mexico's Most Peculiar Pottery 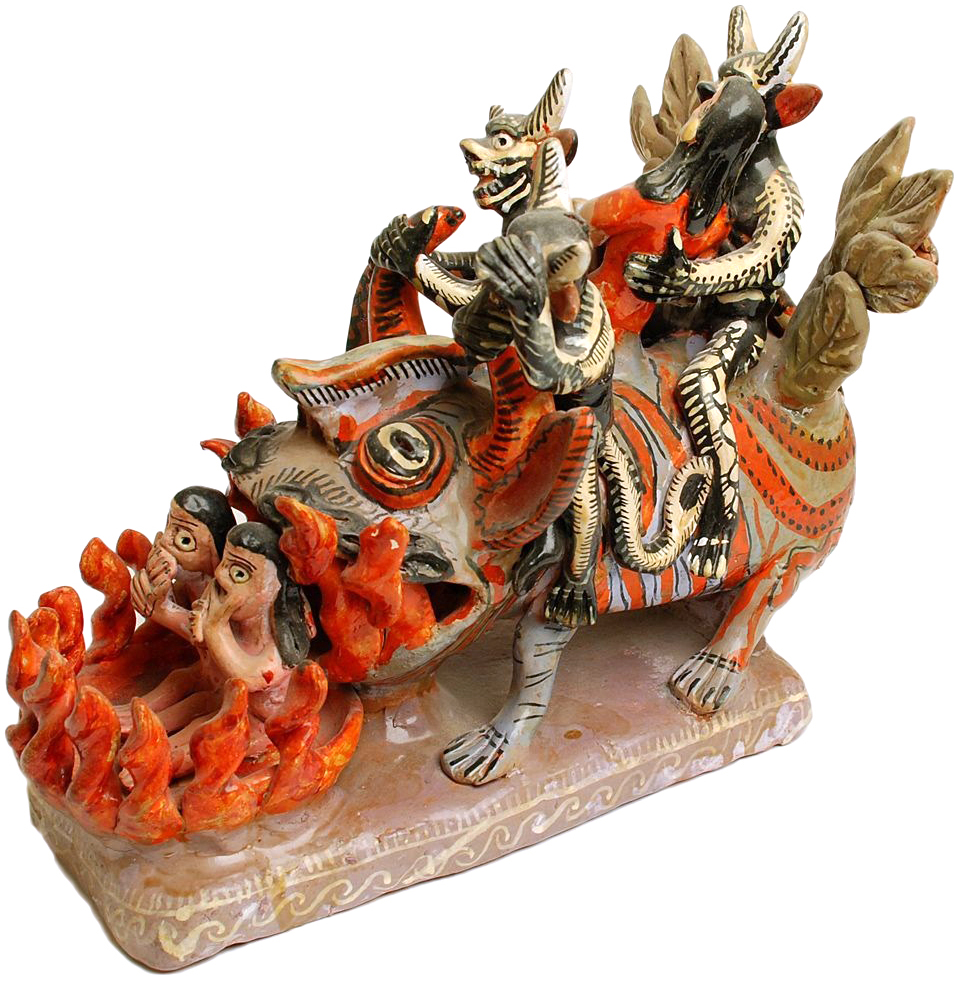 In the rural Mexican state of Michoacán, devils, mermaids, saints, sun gods, and drunks can all be found mixing it up and having a great time. Each of these characters, and many more, inhabit the strange universe depicted in sculptures produced in the tiny town of Ocumicho.

These bizarre pottery tableaux feature hybrid scenes from everyday life, religious allegories, and native folklore, all borne from the mind of a unique young man named Marcelino Vicente. Resembling Hieronymus Bosch’s nightmarish landscapes from the 1500s, but with a Catholic-folk art twist, these ceramic fantasies are found nowhere else. Yet during the 1960s, Vicente’s eccentric lifestyle was perceived as a threat to the town’s social hierarchy, which ultimately destroyed him for being different.

Don Lewis, an artist and collector of Mexican folk art, says the strangeness of Ocumicho pottery first caught his eye in a Santa Fe antiques shop nearly 20 years ago. “Just the life in it, the colors, the craziness of it,” says Lewis. Before he knew it, Lewis was purchasing Ocumicho pieces to decorate his home.

“The first one I ever bought was very simple, nothing too weird about it. It was just two people—a woman and a man—out in an agave field, picking agave to make tequila. The second one was like a man in the moon, but it’s more of a sun face with really sharp teeth. Then another one came along, and I started noticing the devils.” These miniature devil figures, or diablitos, are a particularly striking element of Ocumicho sculptures. 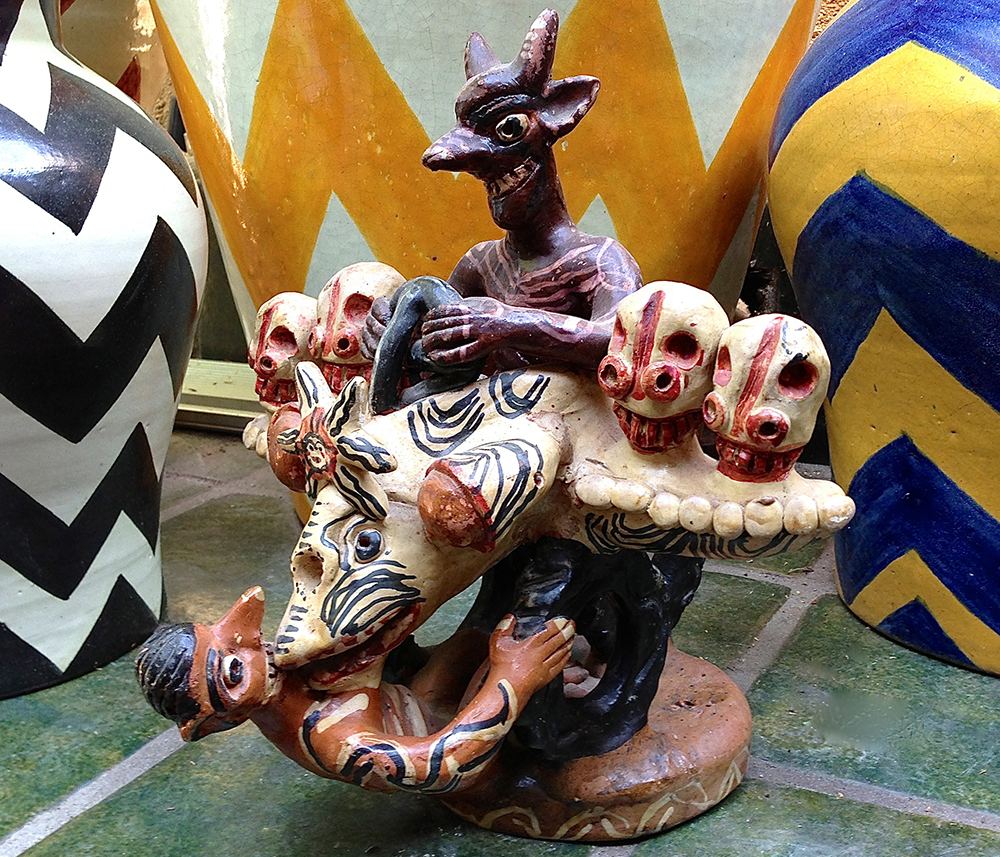 Lewis describes the works in his collection as a mix of the raunchy and religious, the absurd and the everyday. “I have one that shows a devil sitting on top of what looks like a stylized dolphin, and the dolphin’s fins are out to the side like an airplane. There’s a steering wheel coming out of his back, and he’s got another devil hanging on underneath. The propeller is shaped like a sun and then on the wings there are four skulls. Who thinks of this crap? It’s just mad.” In fact, the strange themes of Ocumicho pottery were established by Marcelino Vicente, who’s immortalized by the town’s atypical ceramics.

At the turn of the last century, Ocumicho was a leather-making community. But during the Mexican Revolution of the 1910s, much of the town’s livestock was stolen or slaughtered, and locals reverted to subsistence farming. In order to generate additional income, Ocumicho women began selling small ceramic objects at the weekly tianguis, or open air markets. 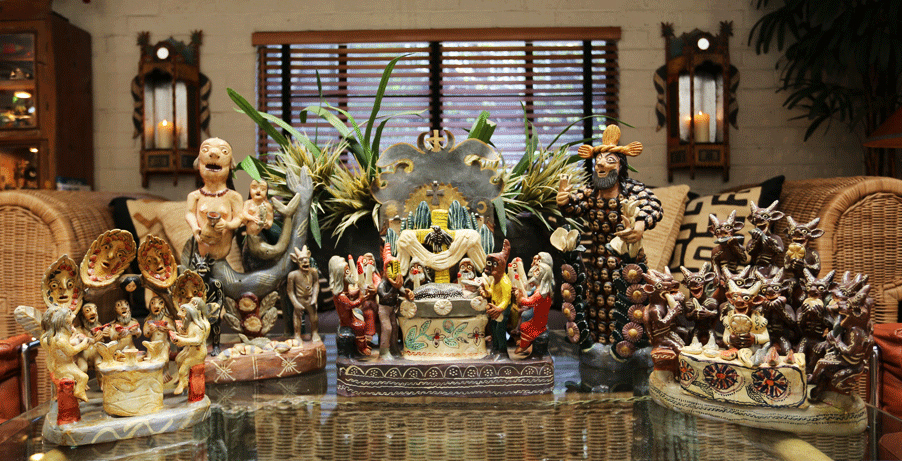 By this time, many of Mexico’s iconic handcrafts, from painted wooden bowls to woven leather shoes, were well-established, incorporating a blend of native and European influences. Once the violence of the Mexican Revolution slowed during the 1920s, intense feelings of national pride reignited an interest in these distinctive folk arts. During the following decades, increased tourism also made Mexican crafts a popular souvenir. 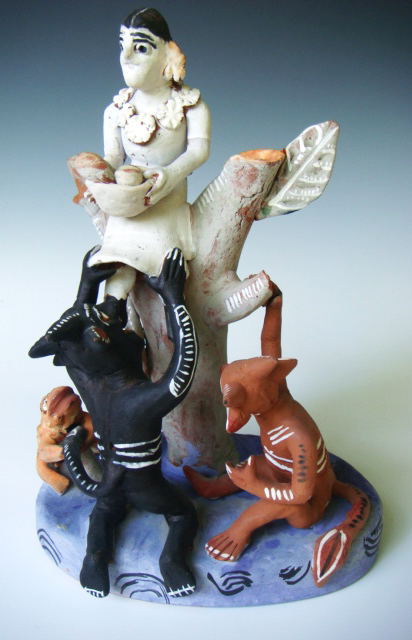 With its abundance of natural clay, the northwestern region of Michoacán was well-suited for pottery, and many small communities like Ocumicho developed their own clay specialties. “Especially in western Mexico, they didn’t use the pottery wheel; they used molds,” says ceramicist Lisa Orr, who is currently working on her third film about Michoacán pottery traditions. “It’s the same technique and process they used 500 years ago.”

The women of Ocumicho built molds of various base shapes, which were then differentiated with smaller clay embellishments, like spouts or handles, and finished with colorful glazes. By the 1950s, Ocumicho craftswomen mostly produced bird-shaped whistles and figurine banks, which they would sell at the local markets.

“But there was this one pivotal character named Marcelino Vicente,” says Orr. “Marcelino was the last of 11 or 12 children, all boys,” she continues, “and many townspeople claim that his mother wanted a baby girl, so she dressed him in girl’s clothing. Growing up, he was also really interested in what was considered ‘women’s work,’ which was making pottery, and was totally mocked by the men for doing this. He was a little bit of a renegade.” 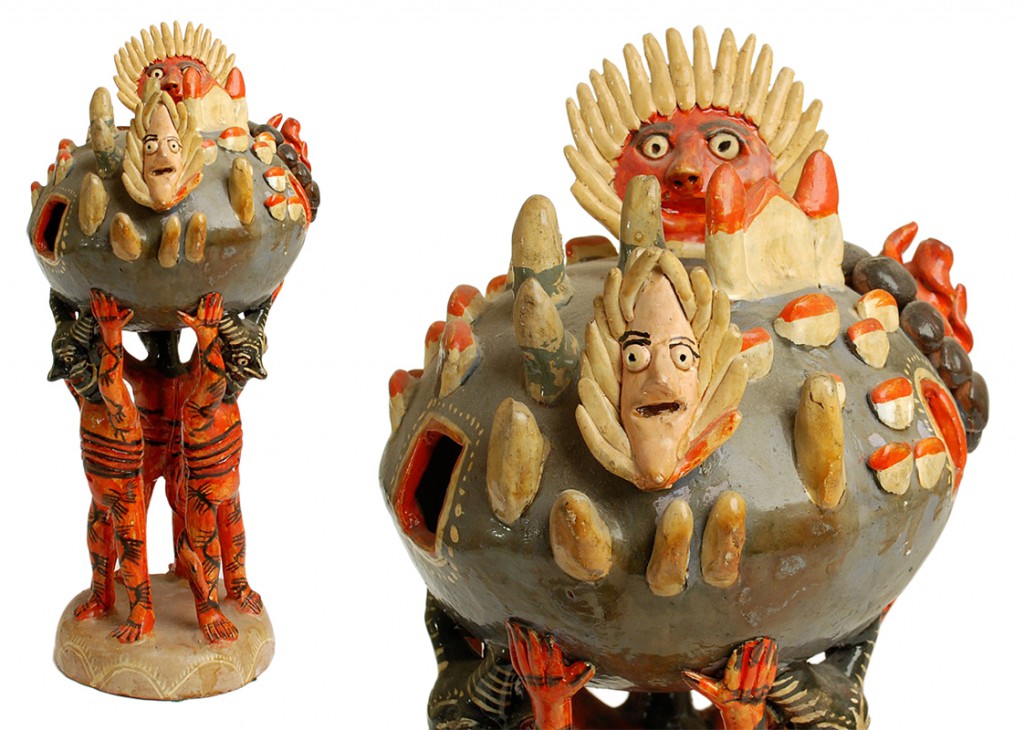 Ocumicho was an extremely poor and isolated village, so it was highly unusual for individuals to step out of the prescribed gender roles. Claudia B. Isaac, who analyzed the gender division in Ocumicho in 1996, wrote that, “Although no one I spoke with directly verified that Marcelino was gay, many talked disparagingly of his reluctance to fulfill traditional male roles.” 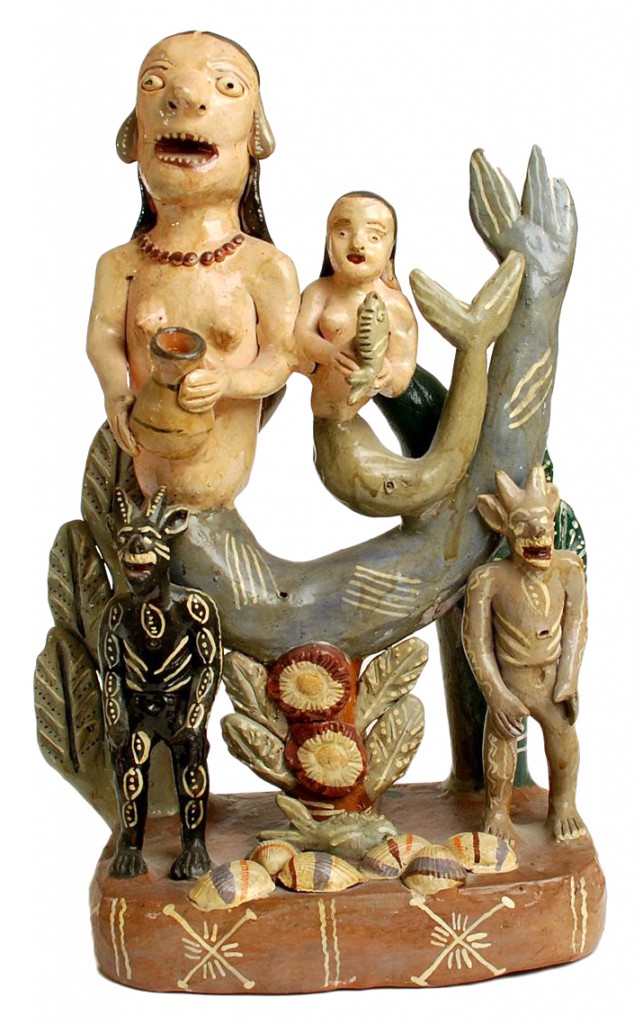 Despite their prejudices, the town’s female potters recognized Vicente’s gift for working with clay, and he progressed from small whistles and banks to larger sculptural pieces featuring the devil characters he grew so fond of. These diablitos were an unlikely icon in such a conservative religious community; most locals associate the devil with bad luck, and are reluctant to bring diablitos into their homes. Yet when Vicente finally took his wares to the tianguis, and spread them out on a blanket for sale, the wacky diablitos were a hit.

Throughout the 1960s, Vicente expanded his production by forming a workshop of skilled artisans to help execute his popular designs. Claudia B. Isaac documented this growth in her research on Ocumicho. “The group included both men and women,” Isaac wrote, “none of whom were closely related. This was a very unusual association in Ocumicho, given the tremendous sanction against men and women, unrelated by blood or formal compadrismo [godparenting], socializing together. Even more unusual was the sexual content of the figures produced by the group. Though sanitized into angels and last-supper scenes for tourist markets, authentic Marcelino figures are almost always obscene.” 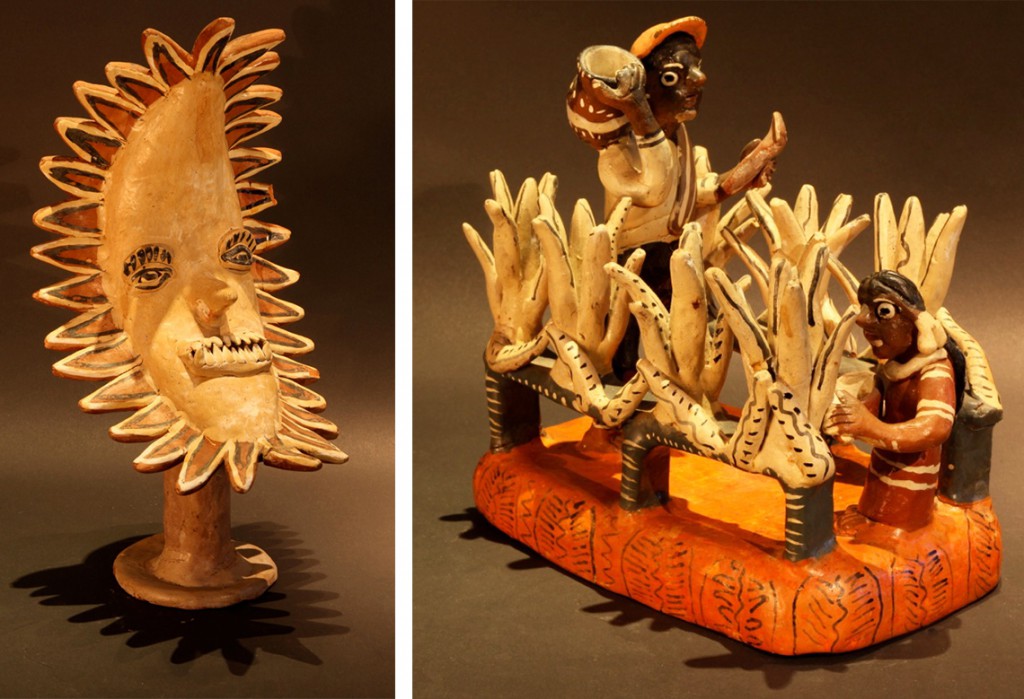 Drawing from native folk dances and religious tales, Vicente began creating strange tableaux with these miniature clay people, often including an element of debauchery. “And customers took note,” says Orr. She explains that Vicente caught the eye of Francisco Mendoza, who worked for the government folk-art agency Fonart. The organization supported native crafts by placing bulk orders to sell in more urban areas, and their interest in Vicente’s work meant much wider recognition outside of Michoacán. Eventually, Vicente went to Mexico City for an exhibition of his artwork.

“There were all these little scenes of devils working in the fields, getting attacked by killer bees.”

“Mendoza gave him his own gallery show, which sold out and basically made him a folk-art star in five years,” says Orr. “Although I cannot find anything to document this, people told me that Marcelino Vicente had a Dutch boyfriend and they traveled to New York for another show of his artwork. Afterwards, he went back to his little village, and was excluded from a certain class of men because he was labeled a joto, or homosexual. But at the same time, he was revered by many. He inspired jealousy.” 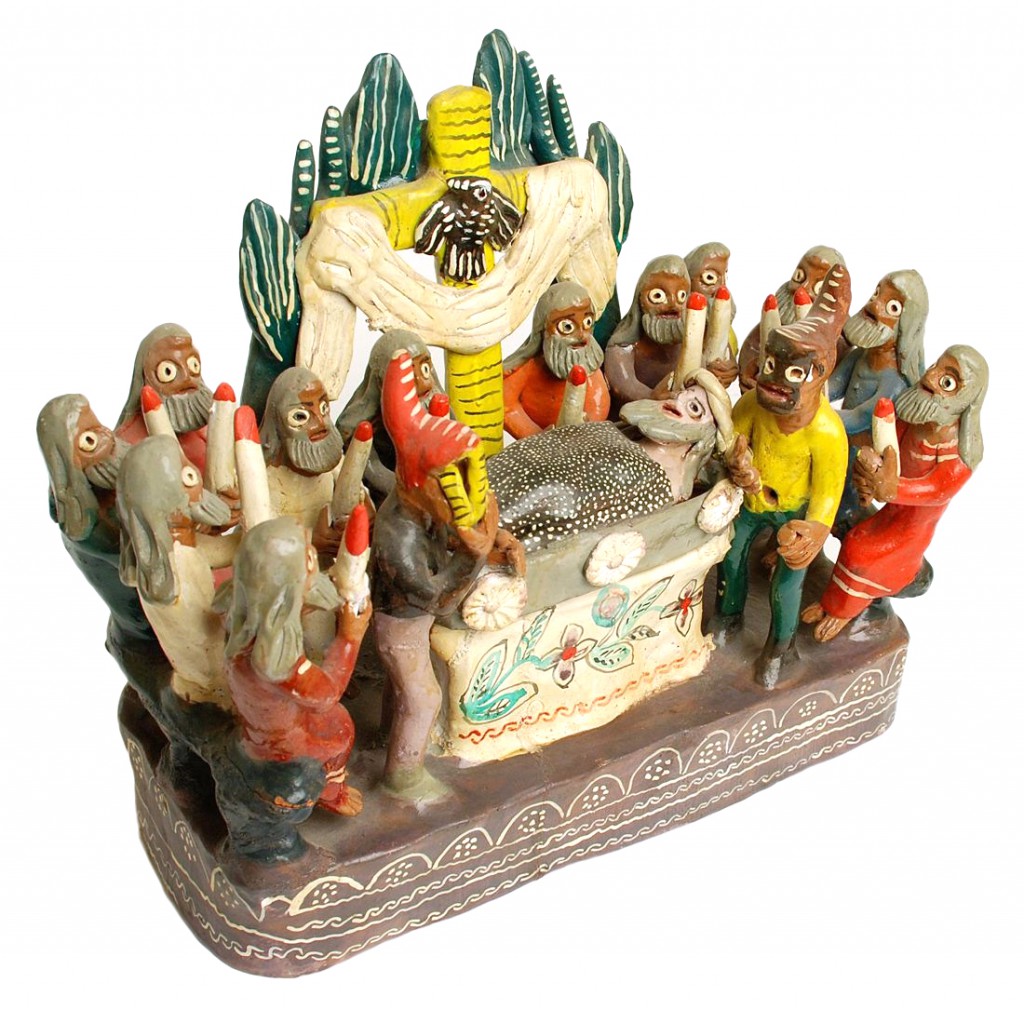 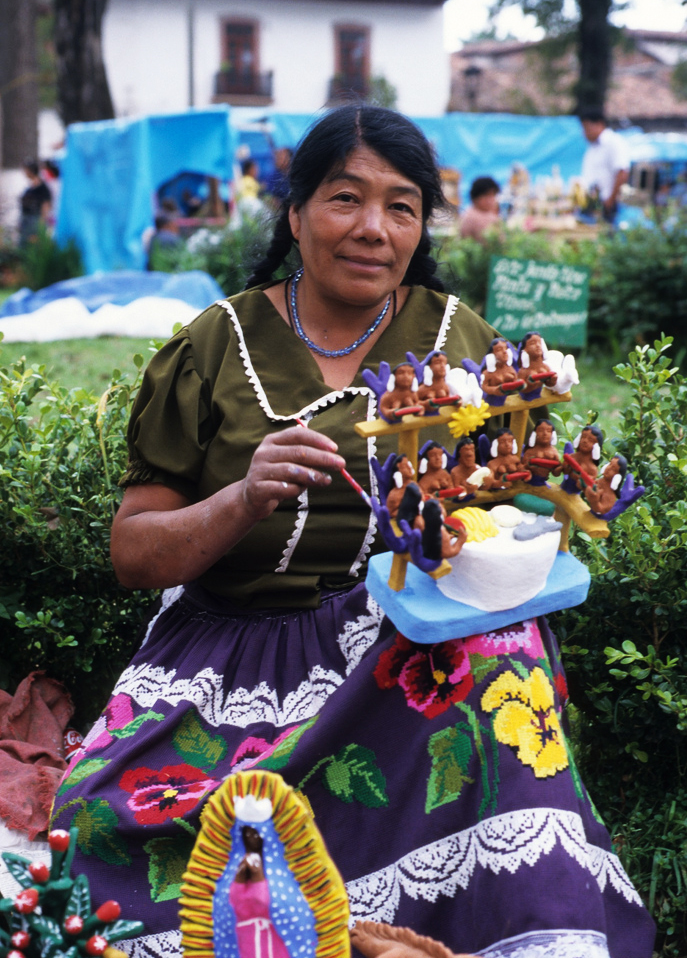 Ocumicho residents say that one evening in 1968, just before Dia de los Muertos, Vicente was at a bar enjoying a beer when he was attacked by a group of men and beaten terribly. “They murdered him in a very hateful, hate-crime manner,” says Orr. “He bled to death on the way to the hospital.”

Though his budding career ended tragically at age 35, Vicente’s artistic legacy lives on in the contemporary ceramics of Ocumicho. “He inspired a lot of the people who helped him in the beginning to continue this style of pottery,” says Orr. “And he basically established the entire Ocumicho style, these little figurines that tell stories. But very few of his pieces can be found, because he only had this five-year career.”

Following his death, several of Vicente’s most trusted assistants opened workshops of their own, continuing to expand on the fantastic tableaux he first imagined. Today, Vicente’s diablitos are still a signature of Ocumicho pottery, which Orr says range “from the sublime to the ridiculous.” Most modern pieces incorporate a brighter spectrum of colors than the original earth-tone palette, and are even more outrageous in their depictions.

This reproduction of a Marcelino Vicente piece portrays a solitary diablito holding a mask. Image via Xipe Projects.

“Because it was a society that didn’t really read or write, everything was passed down verbally,” explains Hank Lee, who runs the San Angel Folk Art gallery in San Antonio, Texas. The pottery of Ocumicho provided a way to preserve communal stories, whether coming from tabloid headlines or traditional folk tales. “They would do sculptures of everything from the penny papers, like the National Enquirer,” says Lee, who remembers each of his visits to Ocumicho through these ceramic depictions of current events.

“I was there during the Ebola outbreak and there were all these horrible, wonderful Ebola scenes. I was there when Pac-Man came out, and they made little Pac people. For the 400th anniversary of the Spanish conquest, they had all these awful torture scenes, and they were just phenomenal. There was 9/11 and the killer bees. There were all these little scenes of devils working in the fields, getting attacked by killer bees.”

When Hank Lee first traveled to Michoacán over 30 years ago, isolated indigenous communities like Ocumicho were rumored to have strange supernatural qualities. “My friends from Mexico City always said Michoacán is where the fairies and smurfs and elves lived, and they really believed that,” says Lee.

“Michoacán was this magical place,” Lee continues, “and these people were making these completely absurd, strange pieces of folk art that were as amazing as Allison Schulnik or Dubuffet or Picasso. They were just completely out there. To me, the stuff that was so wonderful was this pure expression, the sloppy paint and the funk of the devils and mermaids and sex scenes. It was such a visionary place.” 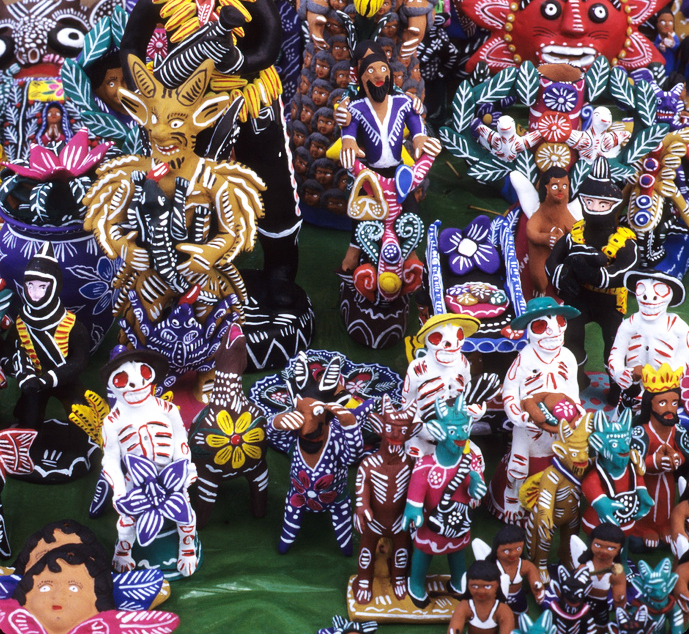 A sampling of the modern ceramics at the Ocumicho market. Image courtesy Thomas F. Aleto. 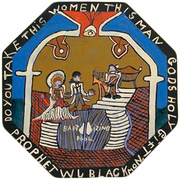 ChalkwareMade out of plaster of Paris, chalkware was used to create inexpensive vers…

SculptureFor thousands of years, sculpture was largely the province of human and spi…