This article focuses on the stamps created by the postmaster of the New York Post Office in the mid-19th century, noting how to determine how many stamps were originally on a sheet, how he signed stamps to prevent counterfeits, and how the stamp spread outside of New York. It originally appeared in the March 1943 issue of American Collector magazine, a publication which ran from 1933-1948 and served antique collectors and dealers.

The first American postmaster to take his cue from Great Britain’s “Penny Black” of 1840 and issue an adhesive postage stamp for interurban mail was Robert H. Morris of New York. The year was 1845, and Morris had just been appointed by the newly inaugurated President James K. Polk.

That was the year Florida became the 27th State, and Texas was annexed as the 28th. Mexico declared war on the United States. Andrew Jackson died at the Hermitage at 78. Annapolis acquired a school for naval officers. 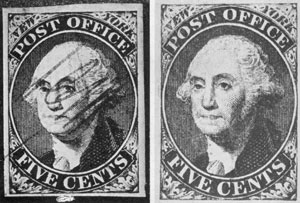 The New York Postmaster's Stamp of 1845: At the left is illustrated a specimen with the handwritten initials ACM in red ink which Alonzo Castle Monson had his aides write on each stamp before it was sold to discourage counterfeiting. At the right an example of the same stamp initialed.

And New York got a new post office on Nassau Street. It was really the Middle Dutch Church, remodeled, and it still looks quite ecclesiastical, steeple and all. Franklin had done his electrical experiments in that old wooden steeple.

The church had been smashed up during the Revolution when the British were turning churches to military use. But it had been repaired for the worshippers in 1790, and finally the Government had bought it, taken out the pews and converted it into a gloomy post office. It had a postmaster’s room arranged so that he could see everything that went on in the building.

The first proud postmaster to move in was John Lorimer Graham who held a preview on Jan. 28, 1845, for a select list of citizens and their families. The invitations “to view the interior arrangements” were extended on elaborately lithographed letter sheets bearing a picture of the renovated church. One of these quaint invitations is in the collection of Norman Serphos, president of the Scott Stamp & Coin Co. With it, he has mounted a copy of Postmaster Morris’s 5-cent black postage stamp.

Morris took over Graham’s eagle-eye room at the post office on May 21, 1845, and promptly gave his order for the new stamp to Rawdon, Wright & Hatch, a reputable engraving firm which made bank notes and fancy letterheads. They took a medallion of Washington’s head, after the famous Gilbert Stuart portrait, which was on a die then being used for bank notes, and engraved a suitable, dignified frame involving the words “New York,” “Post Office” and “Five Cents.”

The engravers delivered the first batch of these stamps to Postmaster Morris at the Old Dutch Church Post Office on July 12. He advertised them for sale on July 14, and copies have turned up on letters dated July 15.

There were 40 stamps to the sheet, in eight horizontal rows of five, but stamp collectors didn’t know this definitely until 1921 when A. Hatfield, Jr., a studious philatelist, proved it. Collectors first thought the plate consisted of l00 subjects. About 1890, specialists questioned this, and eventually the experts decided there had been 50 stamps to a sheet. Finally Hatfield borrowed all the outstanding collections and dealers’ stocks of this stamp that he could, had enlarged photographs made of all horizontal and vertical pairs, and found enough overlapping ones to prove his case.

The tiny marks which denote the position of a stamp in a sheet are slight shifts, scratches or dots, and finding them calls for a keen eye plus a jeweler’s magnifying glass. Each of the 40 positions differs from the others in some way. There are shifted transfers on seven stamps and evidence of recutting on two, according to John N. Luff’s “Postage Stamps of the United States,” to which the writer has turned for several data.

Reconstructing a sheet of stamps in this manner is called “plating,” and serious philatelists love it. It has the fascination of solving a murder case or deciphering a difficult coded message.

Even in 1845, the fear of counterfeits was disturbing, so Postmaster Morris decided after the first day or so of stamp selling to write his initials on every stamp in red ink. He signed all the stamps on a few sheets, wearied of this monotonous task and called on his assistants to take over. So “RHM” copies are scarce. Most of these stamps are signed “ACM,” for Alonzo Castle Monson, the postmaster’s brother-in-law. A few bear “MM” for M. Monson, Jr., brother of Alonzo. 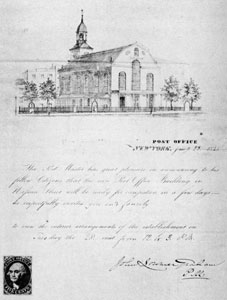 Invitation to New York Post Office Preview: This invitation was issued January 23, 1845 and signed by John Lorimer Graham, then postmaster. The building illustrated at the top was formerly the Dutch Reformed on Nassaut Street. At the lower left hand corner an uncollected specimen of the five-cent stamp issued by New York postmaster.

No one knows what happened to the original engraved plate, but the American Bank Note Co., successor to Rawdon, Wright & Hatch, is said to still have the original die. This die was dusted off in 1862 and a new plate made for George A. Hussey, obliging proprietor of Hussey’s Post who supplied bales of local and other stamps to dealers. The new plate had nine stamps — three rows of three. These reprints are not hard to tell from the original paintings, but are scarcer. From the original plate, 142,240 stamps were printed, but it is doubtful whether as many as 2,000 copies have been saved.

Pleased with his innovation, Postmaster Morris sat down on the same day he received his new stamps, July 12, 1845, and wrote to the postmasters at Albany, Boston, Philadelphia and Washington:

“I have adopted a stamp which I sell at 5 cents each. The accompanying is one. I prefer losing the cost of making them to having it insinuated that I am speculating out of the public. Your office of course will not officially notice my stamp, but will be governed only by the post office stamp of prepayment. Should there by any accident be deposited in your office a letter directed to the City of New York with one of my stamps upon it, you will mark the letter unpaid the same as though no stamp was upon it, though when it reaches my office I shall deliver it as a paid letter. In this manner the accounts of the offices will be kept as now, there can be no confusion, and as each office is the judge of its own stamps there will he no danger from counterfeits.”

The next year, 1846, Postmaster General Cave Johnson directed Postmaster Morris to sell small quantities of his 5-cent black stamp to the postmasters of Albany, Boston, Philadelphia and Washington so that this new postage stamp idea could be tested on an intercity scale. The stamps were to be sold only for letters addressed to New York City, and letters so stamped at the four other cities were to be handled as though unpaid and forwarded to New York where the postal clerks would consider them paid.

For a little while this experiment was carried on, and today collectors are very happy if they can acquire “on cover” specimens of this stamp posted from Albany, Baltimore, Boston, Charleston, Jersey City, New Hamburgh, N. Y., Philadelphia, Sing Sing or Washington.

The success of Postmaster Morris’s stamp was fairly evident from the start. His fellow postmasters at New Haven, St. Louis and Washington followed suit with stamps or stamped envelopes later in 1845, and those at Baltimore and Providence in 1846, not to mention the postmasters of several smaller cities. And in 1847, the Postmaster General issued adhesives for use throughout the United States.