This article discusses the historical significance of patriotic envelopes during the Civil War, describing the various pictures and slogans used and the messages represented from both sides. It originally appeared in the May 1943 issue of American Collector magazine, a publication which ran from 1933-1948 and served antique collectors and dealers.

The spontaneous upsurge of Blue and Gray patriotism generated by the Civil War is amazingly well caught and preserved in the colorful, heroic, flag-waving and caricaturing envelope designs with which lithographers and printers flooded the nation in the Abe Lincoln-Jeff Davis period. The “patriotic envelope” is a war-time propaganda phenomenon which was repeated in Spanish-American days and is with us again in the current conflict. 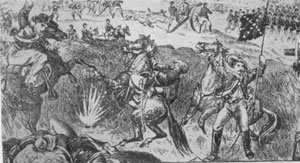 Forerunner of the Picture Post Card: This all-over patriotic envelope of the Civil War period depicts a scene from the Battle of Gettysburg. It beats the imprint of Charles Magnus, a New York lithographer, who produced this and a number of other timely envelopes during this period.

Flags, eagles, clasped hands and figures of Columbia poured through the Northern mails with such pulse-stirring mottoes and sentiments as: “If anyone attempts to haul down the flag, shoot him on the spot!” “Hemp is better for traitors than cotton.” “My God first, my Country next and then my family.” “The day of compromise has irrevocably passed.” “The Star Spangled Banner must wave over every rebel State!” “Subjugation? No! The North seeks but to restore the government of the South into the hands of its real people.”

The Southerners encouraged themselves with envelopes emblazoned with the Stars and Bars, cannon and mounted dragoons, and slogans like: “Victory or Death!” “Fast Colors…Warranted not to run.” “They’ve killed me boys but never give up the field! Bartow.” “We’ll Persevere.” “Southern Independence.” “Liberty or Death.” “Give ’em fits, Bragg.”

The morale-building propaganda came in stanzas, too. Starke & Cardozo of Richmond were selling a flag and cannon design enlivened by the verse: “Stand firmly by your cannon. Let ball and grape-shot fly. Trust in God and Davis, and keep your Powder dry.” And a Jefferson Davis portrait in blue, flanked by red flags, was inscribed: “Now round this gallant leader Our iron phalanx forms. We’ll throw like Ocean’s barrier rocks Our bosom to the storms.”

In fifteen years of collecting unused “patriotics,” Hugh M. Clark, who incidentally edits the famous Scott “Standard Catalogue of Postage Stamps,” has filled a hundred albums with about 12,000 varieties. He knows there are more.

As a rule, all patriotics are scarcer and more costly when used. The earliest ones (generally flags, with or without mottoes or verses) appeared in 1855 or 1856 when the North-South differences were shaping up. As the friction increased, the patriotics grew hotter. Portraits of generals and politicians paraded past, and caricatures noisily ridiculed Jeff Davis, Lincoln and others.

“Mrs. Davis’ Nightmare” is a choice one showing that lady in bed, arms outflung, mouth gaping and night-cap awry, supposedly “dreaming she saw her husband with a rope around his neck.”

These rousing envelopes were first made mainly for use in the mails. But by 1861 people were collecting them as souvenirs, and John. M. Whittemore & Co. of Boston was selling an album, or “holder for preserving illustrated envelopes,” which would take one hundred. Car Bell, the Hartford printer, issued a cover to promote this hobby. It showed a top-hatted gent, with carpet-bag, reading a newspaper which advised: “A collection of Union envelopes in a few years from now will form a most valuable and pleasing curiosity, and will be sold at double the original cost.”

One hundred and sixteen printers in thirty-nine cities are known to have turned out Union patriotic envelopes. Charles Magnus of New York and Janes Magee of Philadelphia were two of the leading producers. Magnus, a general lithographer, did a business similar to that of Currier & Ives. In fact, these two print-making firms had offices within a block of each other and their work is almost identical. Currier & Ives did work for other firms whose imprints appeared on the lithographs, which leads Hugh Clark to believe that most of the jobs signed “Charles Magnus” were really done by Nathaniel Currier and James Merritt Ives, those familiar “Printmakers to the American People.”

Magee saw a market among Northern collectors for rebel souvenirs, and printed plenty of fake Confederate patriotics right in Philadelphia.

Heroes got the spotlight on many patriotic envelopes. Colonel Elmer E. Ellsworth, organizer of the 1st New York Zouaves, was memorialized in several designs as the first Union officer killed in the war. He was ordered into the Marshall House at Alexandria, Va., on May 24, 1861, to pull down the Confederate flag that hotel was flying, and replace it with a Union banner. Coming down the stairway with the Southern flag, the colonel was “assassinated” by the hotelkeeper who, in turn, was promptly dispatched by a comrade of Ellsworth. This incident inspired the envelope illustrators to produce portraits of Ellsworth, quotations from his last letter to his parents, a sketch of him collapsing on the stairs, a close-up of Ellsworth’s cohort bayoneting the proprietor, a mourning-banded envelope suitably inscribed, a combination of “Warren, first officer killed in the Revolution,” and Ellsworth, and a somber view of the “Tomb and Shade of Ellsworth,” the shade being a ghostly figure outlined in the trees.

Patriotic Caricatures and Heroic Scenes Enlivened Many Civil War Envelopes: Many of these were printed on the left end of the front of the envelope. The five reproduced, from left to right are a cartoon reflecting the engagement of the "Monitor" and "Merrimac"; the death of Colonel Elmer E. Ellsworth avenged; General Winfield Scott taunts Jefferson Davis about taking Washington; another cartoon jibe at Davis' inability to capture Washington; and cotton depicted as "the innocent cause of all the trouble."

Col. Michael Corcoran, the Hero of Bull Run, also enjoyed some stationery publicity. Corcoran, who belonged to the 69th Regiment, New York Volunteers (the “Fighting Irish”), was a prisoner of the Confederates for a year. One envelope showing the colonel said fervidly: “Sons of Erin — Let the watchword be Corcoran! Rescued if living. Avenged if dead!”

Sometimes the political angle predominates, as in the numerous envelopes issued pro and con during the two presidential campaigns of Lincoln. One head of Lincoln accompanies the slogan: “They can afford to do a wrong. I cannot.”

A James Buchanan portrait, labelled JUDAS, has these words beneath it: “He was elected President by fraud and trickery! under his administration the Treasury was robbed! duplicity and cowardice marked his career! finally, he sold his country to a band of Southern conspirators, and now lives to be pointed at with the finger of scorn, by all true men! and will go down to his grave unlamented.”

When Major General Freemont ran for President in 1856, his Republican promoters issued small adhesive labels resembling stamps and bearing his portrait and the words: “Liberty and Union.” These were printed in black on white and pink paper and are exceedingly rare “on cover.” Another Freemont campaign sticker, unillustrated, read: “Free Land, Free Labor, Freemont!”

Songs and poems were used on many envelopes. Collectors have found seventy-four different poems, including that classic, “My Last Seegar.”

Army corps insignia, state coats-of-arms and flags, camp scenes and battle scenes turn up occasionally. A series of 12 scenes records the Battle of Gettysburg. Other envelopes show artillery flashing and horses rearing at the “Siege and Capture of Fort Donelson,” the “Advance of General McClellan on Richmond,” or the “Battle of Pittsburgh Landing or Shiloh.” It took a dozen envelopes to depict the Battle of Mill Spring, Kentucky.

Fast action naval scenes include the “Sinking of the Stone Fleet off Charleston Harbor” and the “Great Battle between Ericcson’s Monitor and the Merrimac.”

Magnus took a large map of Alexandria, Va., ruled it off in sections and made up 27 different envelope designs with the segments. This made a puzzle which still intrigues Collector Clark who cleverly solved it a while back.

These and other maps were among the all-over designs which supplanted the earlier corner designs and were the forerunners of the picture postcard. One all-over design series, “The Lincoln-Davis Prize Fight,” in several rounds, is among the best known caricatures.

Harper’s Weekly, source of many an envelope design, supplied another well-known caricature: a bulldog (Scott) guarding a piece of meat (Washington) and asking a terrier (“Jeff”), “Why don’t you take it?”

The collector who wanders into the field of Civil War “patriotics” soon finds himself gathering not only the propaganda envelopes and letter paper, but song books, song sheets, campaign badges, political cards, printed silk ribbons and handkerchiefs, and even paper collars and cuffs. They all add up to a picture of that blood-stirring time when patriotism and fighting spirit ran high — as they do today.

US Stamp CoversStamp covers are perhaps the most tangible examples of postal history, whic…