The Sewing Machine of His Dreams 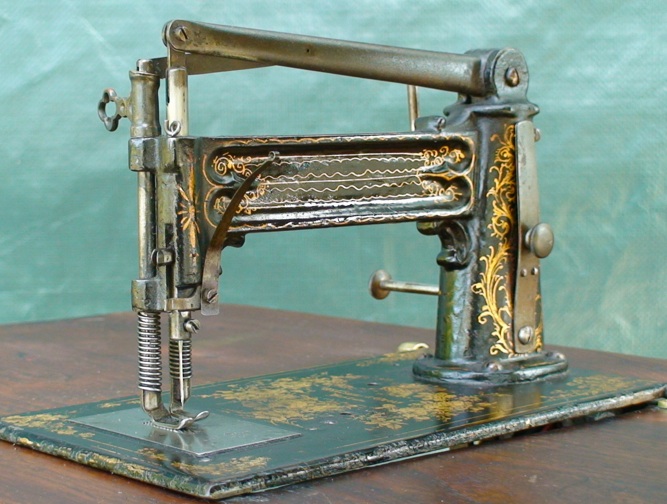 Every now and then, a collector gets lucky and finds that once-in-a-lifetime item. We all scour the planet for the things we love—the rare, the unusual, the pristine. The story of this 1860 Williams & Orvis treadle sewing machine is, however, not one of a lucky find, it’s one of the hunt.

I’ve been buying and selling antiques for years now, but my focus on antique sewing machines—and antiques of a mechanical nature—began about 10 years ago. As most who collect do, I started attending local auctions to find the things I wanted. At a New Hampshire auction one evening, I was talking to a gentleman who said to me, “You should have been here last week. They sold a very rare antique sewing machine, called a Williams & Orvis.” Being the tenacious person I am at times, I began asking people at the auction about the machine, and who had purchased it. I eventually found the lucky high bidder, who promptly informed me that the machine was already gone, on its way out west somewhere. I had missed it by one day! Even if I could not have purchased it, the chance to see such a rare machine would have been priceless to me. What a disappointment!

The years went by, and from time to time, I would daydream about the Williams & Orvis that had eluded me. But again, being a bit tenacious, whenever I met a new serious collector, I would ask if it was him or her who had purchased the machine. Well, one day—after what seemed like an endless streak of people saying, “No, not me! But if you ever get one …”— I met a lady who said, “Yes! That’s my machine!” I nearly fell over! We talked for a while about the machine, and over the years, when we’d occasionally do business together, she’d let me know that the machine was as pretty as ever, and doing fine. I never asked to buy the machine, because I new how special it was—to her. The machine was located about half way across the U.S.A., so I never saw it either.

This past April, the phone rang in my office, and a lady said to me, “Are you the Mike Anderson who buys and sells sewing machines?” She went on to say, after calling over 70 “Mike Andersons” in New Hampshire, that she was relieved to have finally found me. Talk about tenacious! The lady explained that her mother-in-law had passed away, and that in her will she stated that she would like me to handle the sale of her antique Williams & Orvis sewing machine, because she knew I worked with collectors, and her machine would then go to a good home. I was touched, to say the least. 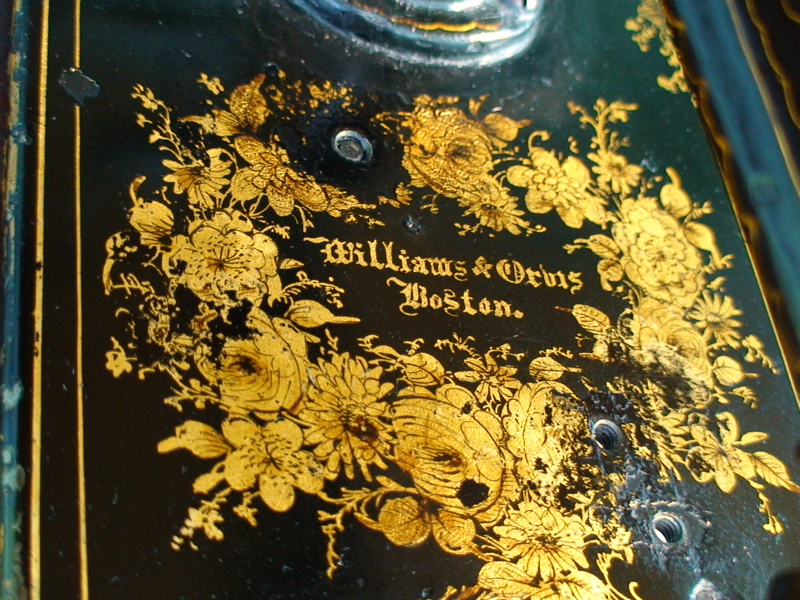 The Williams & Orvis Sewing Machine Company was based in Boston, Massachusetts, and began operations around 1858, when a patent was filed for the first of two models. The machine shown here is a first model Williams & Orvis. In all only a few thousand of the first model machine were thought to be manufactured. This machine’s serial number is #1921. Williams & Orvis only made treadle machines, which sewed a two-thread chain-stitch. It’s unusual in that the main drive mechanism of the machine does not use standard leather treadle belt but a friction drive system.The main flywheel rubs against the machine’s smaller drive wheel, which propels the machine. Williams & Orvis machines are sometimes hard to identify because few were made, fewer have survived, and typically, their lush gold decorations are a thing of the past. That’s what made this machine so special, incredibly well preserved in every way.

After years of hunting, I found my dream machine. I never thought it would come to me the way it did, or that I’d ever own it.

Non-Singer Sewing MachinesSinger may be the name most associated with sewing machines, but the compan…