If These Shirts Could Talk: The Tantalizing Tales Behind Used Clothes 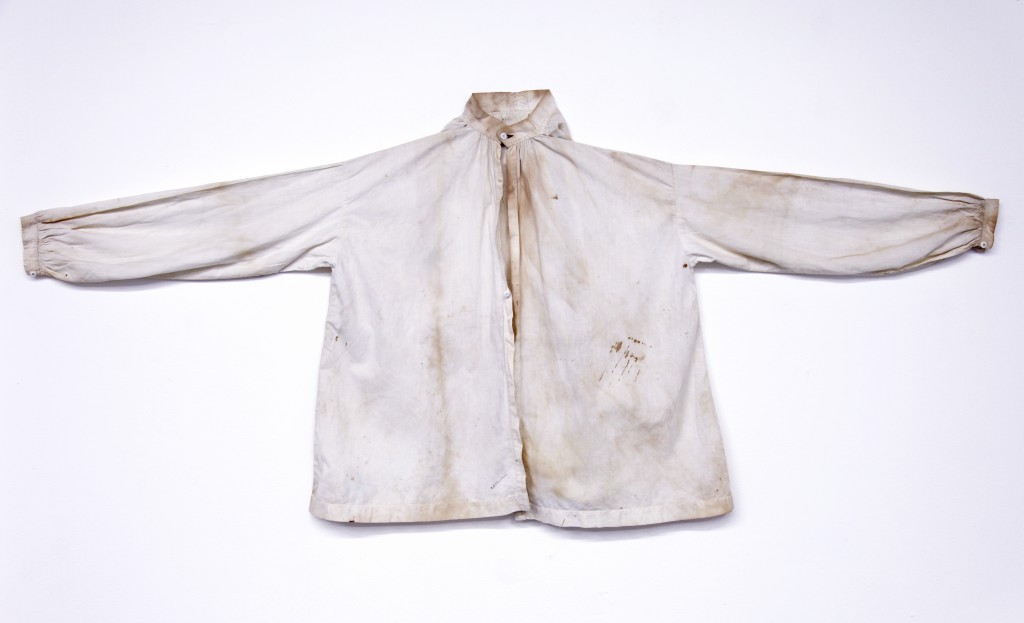 The mysterious packages kept arriving, some from eBay, others from the Home Shopping Network, each addressed to her. All these clothes she didn’t want, which weren’t her size or style. She couldn’t explain them to herself, much less her husband. Finally, late one night he heard her stirring and awoke to see his wife browsing shopping websites and ordering clothes in her sleep.

“They were selling this dress with blood splattered on it.”

Emily Spivack, a writer and fashion historian, stumbled upon this extraordinary tale buried in the description of an unremarkable dress on eBay. When she first began exploring the shopping website around 2000, Spivack was struck by the humanizing element in such ordinary auction listings. “I was intrigued by the idea that this marketplace—which was supposed to serve one function, to be transactional—could also have a storytelling emphasis,” Spivack explains. “Interestingly, the time I spent on eBay became much more about looking for stories than things that I actually wanted to purchase.”

As the creator and editor of the Smithsonian’s fashion history blog, Threaded, Spivack often dissects the social, political, and historical ramifications of clothing styles and shifts. But with her “Sentimental Value” project, Spivack has chosen to examine the more personal impacts of clothing, scouring online auctions for the most intimate and revealing stories. For the new “Sentimental Value” exhibition at the Philadelphia Art Alliance, Spivack has curated a fascinating selection of such bizarre online disclosures, along with the physical garments they describe. 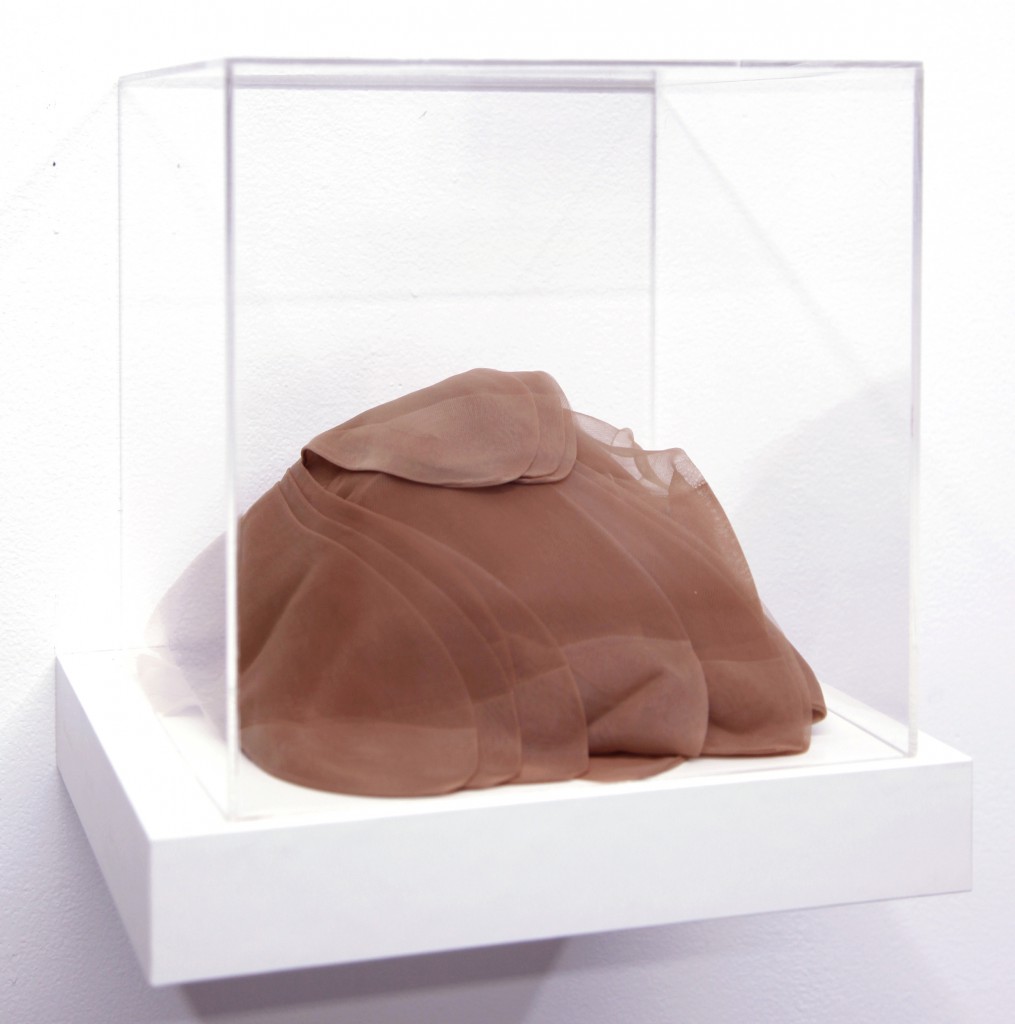 Top: Spivack’s Civil War era shirt with mysterious stains. Above: This cache of stockings was the first purchase Spivack made on the basis of its backstory. Photos by Shana Lutker.

“Sentimental Value” originally began as an online archive of the narratives Spivack discovered in eBay item descriptions. In 2007, after happening upon a specific auction that included a fascinating backstory, Spivack became hooked on this method of inadvertent storytelling.

“I was looking for vintage high heels, and I came upon this vintage Playboy bunny outfit from the ’60s with the puff-ball tail and stockings, and these beautiful black high heels. They had all the costume elements, and also the woman’s original ID card and a photo of her wearing street clothes, just looking totally normal and completely anonymous. To find this costume that’s so loaded and also see this person who would put it on in the expressionless photo, all these things just clicked for me.”

Spivack began searching out the most unique narratives hidden among the standard product listings on eBay, and saved the most fascinating for her “Sentimental Value” archive. Since the site’s launch in 2007, Spivack estimates that she’s collected images, text, and screenshots for over 600 eBay stories. 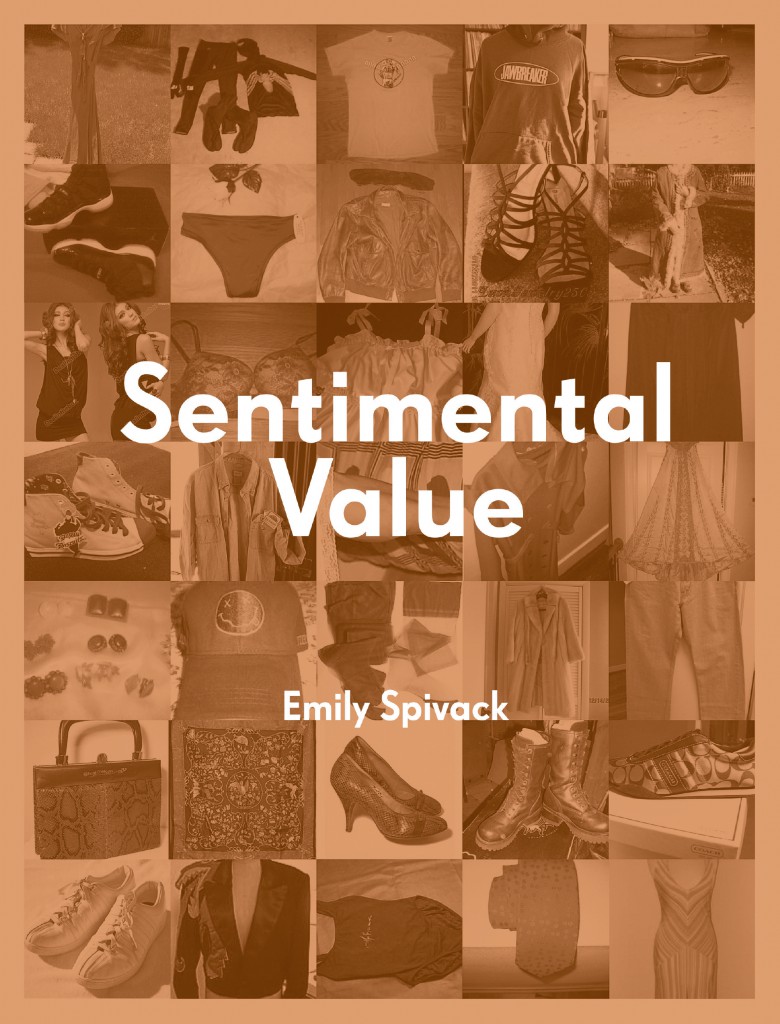 Though such interesting stories are few and far between, Spivack appreciates these attempts to interject a human connection into these detached online transactions, especially as we do more and more of our shopping on the Web. “I get the sense that people are being a bit more thoughtful about their purchasing these days,” she adds. “They want to hold on to things longer and knowing the story behind something can really add to the longevity of the item.”

Spivack believes that sellers are compelled to include these personal anecdotes because of what they might add to their clothing’s value. “I do think having a story attached adds a greater significance to the object and people appreciate that,” she says.

“Now she has to set an alarm every day to make sure that she hasn’t gone shopping in her sleep.”

In 2010, Spivack took her project to a new level: For the first time, she considered bidding on these items, garments she had no intention of wearing. “What would happen if I started collecting these stories in a physical way?” she wondered. “I wanted to see what the experience would be like to have these packages arrive in the mail. To be like, ‘Oh, my gosh, these are the denim cutoffs that this woman wore to a Grateful Dead concert when she met her husband, and now I have them.’ Or the pair of hot pink Versace jeans that Jessica Simpson supposedly once owned, and gave to her backup dancer, who then gave them to a real-estate agent who sold them.”

By then, Spivack had a clear sense of the more common tales she would encounter, like those about wedding dresses or weight loss, so she held out for only the most exceptional backstories. Her very first “Sentimental Value” purchase was a lot of vintage stockings, supposedly hidden in a barn where they had been used in pornographic films. 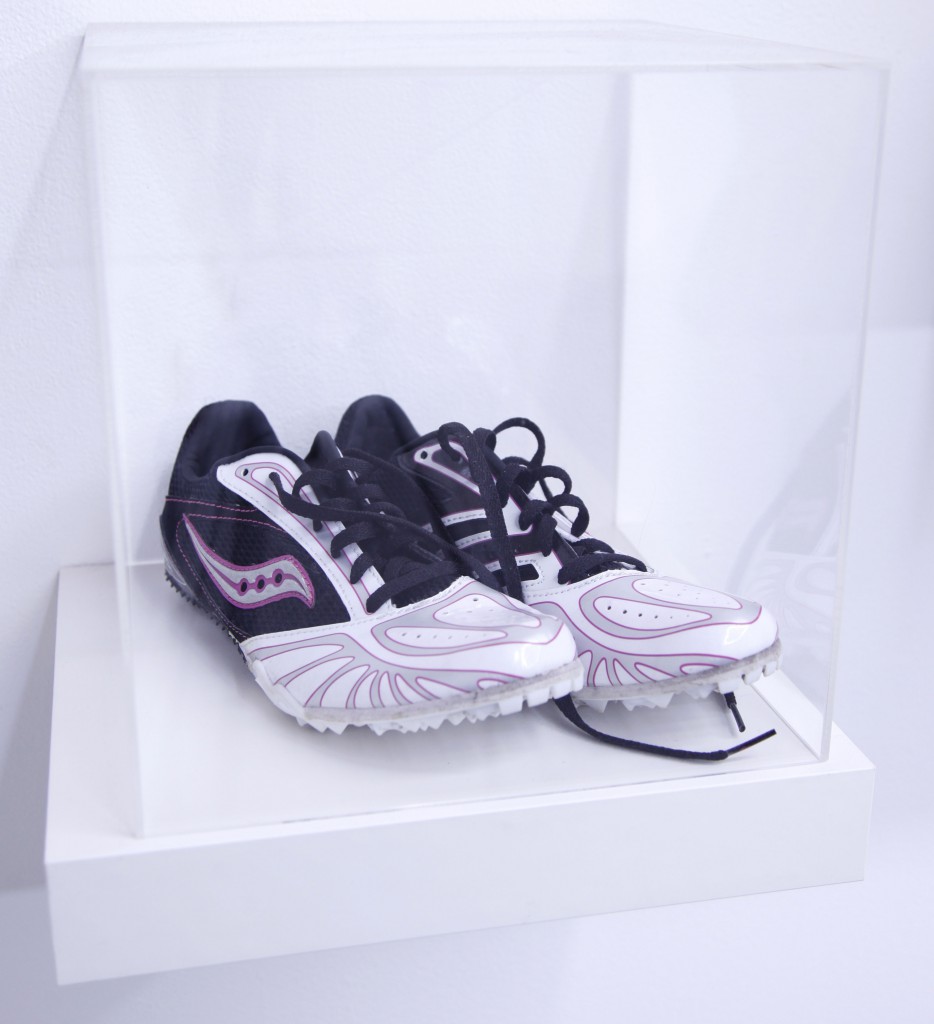 These shoes were worn by a runner who blacked out for the final 15 minutes of a race, collapsing after she crossed the finish line. Photo by Shana Lutker.

Since taking this initial plunge, Spivack has collected nearly 70 different pieces, none of which she has ever considered wearing. “They fit into a different category in my mind,” she explains. “In a way, they’ve become art objects.” Around 20 of these items are on view at the Philadelphia Art Alliance, along with excerpted auction texts and a video featuring several more pieces from Spivack’s collection. The exhibition is designed to convey the diversity of objects and stories that Spivack has uncovered, coming from people of all socioeconomic levels and describing everything from priceless heirlooms to mass-produced mall brands.

“Some are historical, but I also wanted to include items that felt deeply personal, where the person was really revealing something intimate about themselves. I wanted to include stories that captured the language of the Internet, with emoticons and LOLs, or written in all caps, like they’re yelling at you.”

In addition to this online vernacular, Spivack also appreciates the significance attached to such commonplace, run-of-the-mill articles of clothing. “I love finding stories about really ordinary objects, like a sweater you might look at and not think that there’s anything spectacular about it, until you hear the person’s story. Somehow, they tell you that they’re related to an astronaut who had taken two missions to the moon, and that they’re very sick but also a hoarder.” 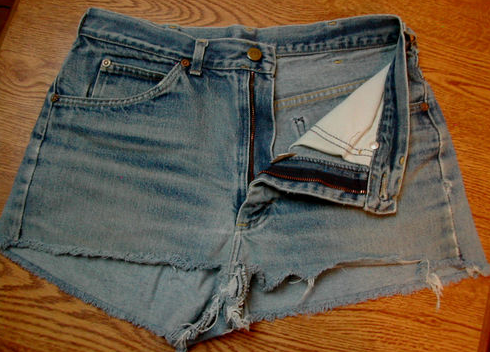 Included with these cutoffs was this description: “I had forgotten to bring shorts for the weekend, so the guy I was with, now my husband, helped me out with a pair of borrowed scissors! True story—gosh, I hate giving these up!!!!”

Spivack refers to these backstories as the “provenance” of her pieces, a term used in the world of antiques to convey a documented form of object history, typically relating to the specific artist, manufacturer, or owner of a piece. Yet for Spivack, anonymous and unverified provenances are equally compelling, whether for Jessica Simpson’s Versace jeans or a Victorian-era brocade dress or a T-shirt from the 1980s.

Even the most traditional pieces in Spivack’s collection have unreliable qualities to their stories, like the Civil War era shirt shown at top. While the age of this garment is confirmed, the reasons for its mysterious stains and alterations are pure conjecture. “The ragged hole does have some dark edges, as if blood soaked,” wrote the original seller. “There is what appears to me to be blood stains to the front and back, mostly laundered, but leaving wash stains, although there are spots of blood set in on one of the arms. There is a patch of blue color on the back suggesting to me that some migration of color from a Union uniform during a wash has transpired onto the back, which might indicate it was mended and worn again in active duty, if this was worn by a soldier during the Civil War.” As Spivack explains, “It’s provenance with a twist.”

Other garments have less dramatic histories, like the clothing ordered by the sleep-shopper at the beginning of this article. “Now she has to set an alarm every day to make sure that she hasn’t gone shopping in her sleep,” says Spivack.”I get the sense with a lot of these stories that people want to share them, but they haven’t really thought in great depth about why they’re sharing it. It’s just an intuitive thing to them. And I happen to be capturing these stories before they disappear from eBay and the memory is lost.” 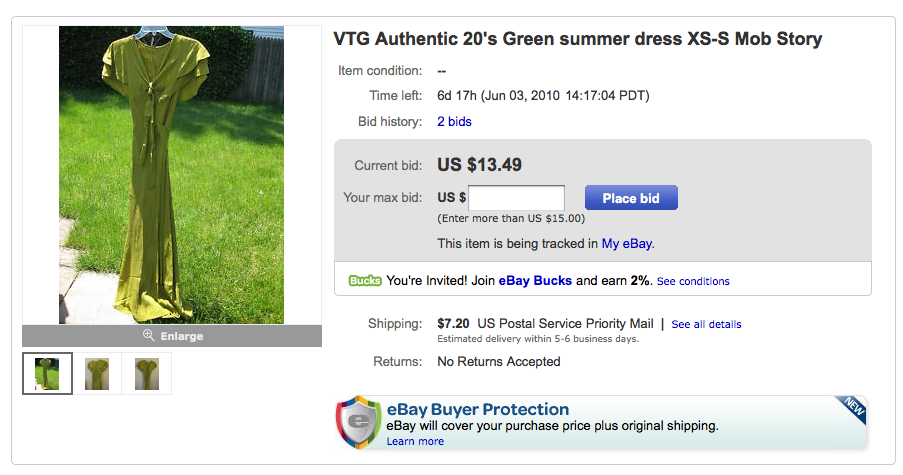 A screenshot of the eBay listing for a silk dress reportedly worn during a mob-related killing in the 1920s.

Spivack’s favorite stories typically blur the line between historical, personal, and hearsay, like the description of the green silk gown belonging to a seller’s aunt in the 1920s. “Supposedly, her aunt wore the dress to a club one evening,” says Spivack. “She was a blonde, and moved fast, and her boyfriend was involved in the mob. And when they went out that night, someone next to her was shot and killed, and blood splattered on her dress. So they were selling this dress with blood splattered on it. I bid on it, and it’s in the show. To me, that story is absolutely incredible.”

Perhaps what Spivack finds most alluring is the raw realism of these fleeting wardrobe memories. “They’re written in Internet language, and they’re not the most beautiful garments or the most incredibly well-told stories. In a way, that’s what I love about it: I’m intrigued by other people’s experiences with clothing, particularly when they’re not really interested in fashion.”

(To learn more about Emily Spivack’s “Sentimental Value,” check out the website or visit the exhibition in Philadelphia through August 18th, 2013.) 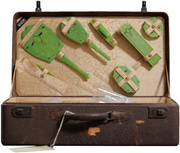 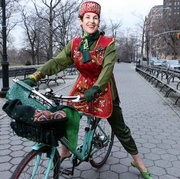 Leading the Charge Against Casual Style, Armed With Antique Clothes and a BikeCould Your Stuff Be Haunted? Ghostbusting the Creepiest Antiques 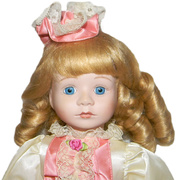