Traveling the World Via Vintage Skirts

Today’s guest blogger is Lizzie Bramlett, a.k.a. Fuzzy Lizzie, a self-made clothing historian who has a website, Fuzzy Lizzie, and a blog, The Vintage Traveler. 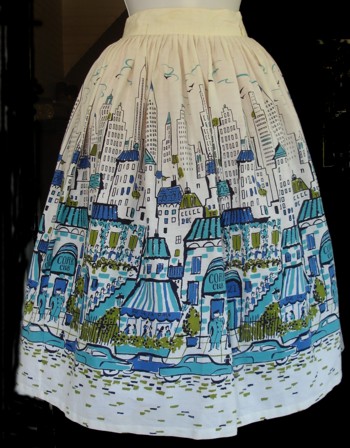 I started collecting vintage border-print skirts that have a travel theme after I pulled a piece of fabric depicting stacks of luggage from a flea-market $2 bin. I bought it, took it home, and made it into a skirt. Since then, I’ve been hooked on finding new destinations that appeal to me and my sense of travel—captured in a vintage printed skirt.

Such skirts actually date to the 1940s dirndl skirt, a straight skirt that was loosely gathered in the waist. The dirndl was perfect for the fabric-saving war years, but after the war, skirts got fuller and fuller. Fabric makers first made border-printed cottons for pillowcases and aprons, but before long, women were sewing them into skirts. 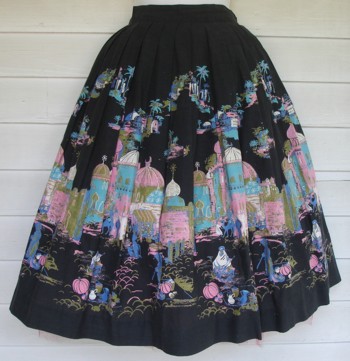 Designers like Juli Lynne Charlot—who introduced the poodle skirt in the late ’40s—brought a new wave of whimsical skirts to store windows, many featuring fun designs in printed cottons. By the 1950s, there were dozens of choices for prints, everything from dogs and kittens, to baskets of roses, to scenes of fabulous places, both past and present.

It’s these travel-themed prints that I seek out for my collection. And I use the word “travel” quite loosely, because I love skirts that travel not just around the world, but also through time. I have one that is an odd combination of Wild West meets Las Vegas! 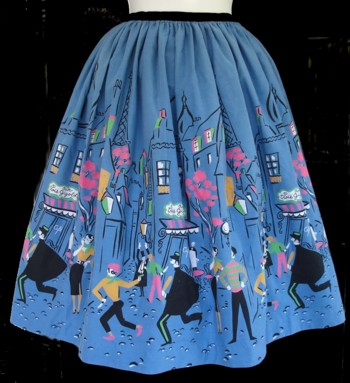 There are so many different types of prints that my advice to a new collector would be to pick a theme on which to build the collection. You might not be attracted to the travel-themed skirts, but maybe historical prints or animal prints would appeal to you instead. You could also build a collection around a particular artist. Most of these prints are not signed, but some do have the manufacturer of the fabric printed on the selvage. And some of the print artists have such a distinctive style that their work is easily recognized. In my own collection, I have two skirts—the Wild West print and one of my Arabian themed ones—that were clearly designed by the same artist, and I’ve seen other examples of this style as well.

Garment labels are not important, as many of these skirts were home-sewn, and the fabric was often available to many different clothing makers. Besides, it is not the maker that is the main thing—it’s the print itself.

SkirtsSkirts can be worn as separates or coordinated with suits, as Coco Chanel s…