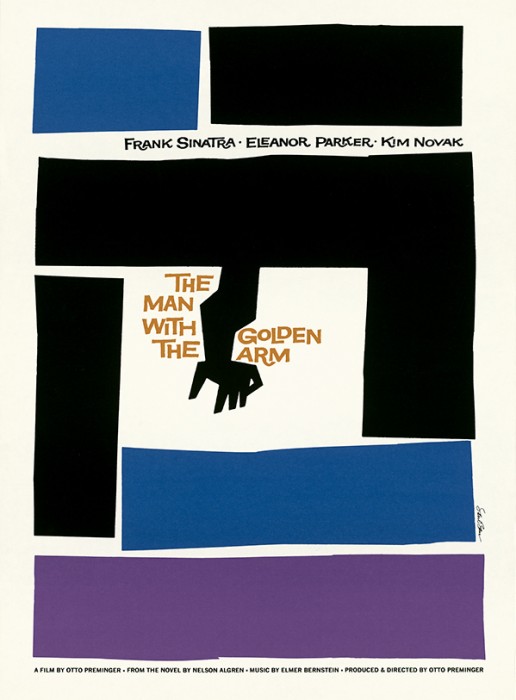 Who was â€śThe Man With the Golden Armâ€ť and where did he come from? Well, Frank Sinatra played the â€śManâ€ť in the 1955 Otto Preminger film, and the movie itself was shot at RKO Studios in Hollywood. But after reading John Cliffordâ€™s “Graphic Icons: Visionaries Who Shaped Modern Graphic Design” (Peachpit Press, 2013), I’ve come to think that â€śSaul Bassâ€ť and â€śRussia right after the 1917 revolutionâ€ť might also be suitable answers to these questions about one of the most famous movie posters of the 1950s.

Bassâ€™ authorship, which is widely known, is probably why most of us in 2015 think only of the Mid-Century Modern era when gazing upon the posterâ€™s stark composition. In Graphic Icons, though, Clifford suggests the posterâ€™s influences probably go all the way back to the 1920s, when Russian Constructivism and the great El Lissitzky proved that minimal typography and a handful of simple shapes could be effective communication devices. 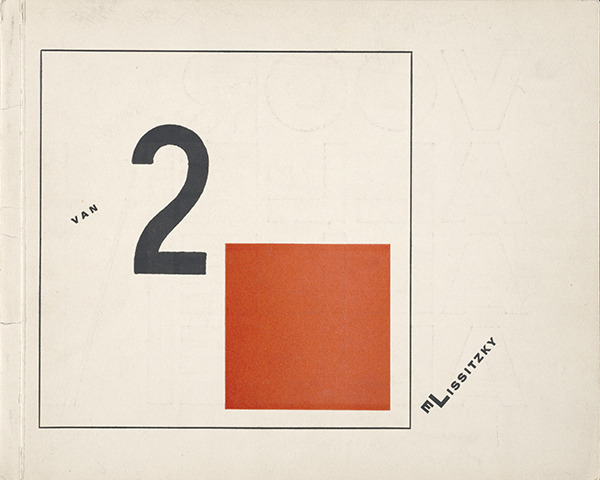 An untitled composition by El Lissitzky from 1922.

In some respects, the two artists could not have been more differentâ€”Saul Bass produced propaganda for Hollywood movie moguls, while El Lissitzky did the same for Vladimir Lenin, using little more than geometry to communicate the ideals of Bolshevism to a nation that was largely illiterate (on second thought, perhaps there are a few similarities). Visually, though, the two men spoke the same languageâ€”Modernism.

Such connections abound in Graphic Icons, which Clifford says he wrote in part because he was surprised such a book did not already exist. â€śThereâ€™s a great textbook called A History of Graphic Design,â€ť he says, â€śbut itâ€™s this giant, hulking thing. I wanted something functioning a bit more as an introduction to that book. I always thought Steven Heller would write it,â€ť he adds, referring to the prolific design writer, who gets his own chapter in â€śGraphic Icons.â€ť â€śWhen he didnâ€™t, I thought, well, maybe I should give it a try.â€ť 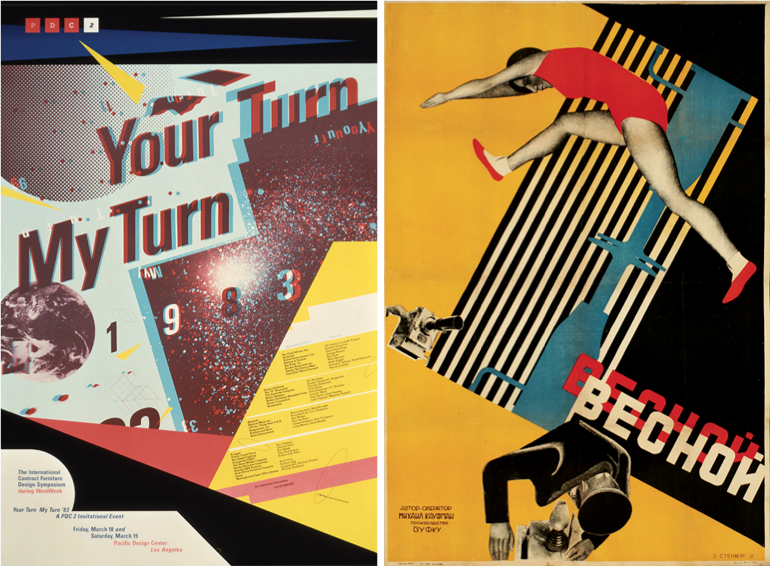 Left: A 3-D poster for a design symposium called “Your Turn My Turn” from 1983 by April Greiman. Right: A poster for the 1929 film “In the Spring” by Vladimir and Georgii Stenberg.

The result is just under 240 pages of photographs and short essays, most of which are profiles of the 50 or so individuals who make up the â€śIconsâ€ť of the bookâ€™s title. And while there are nods to Art Nouveau and other aesthetic movements, the focus is almost entirely on the various flavors of Modernism that evolved during the 20th and 21st centuries. (Largely absent is Art Deco, which in the context of the formal Modernism that dominates Cliffordâ€™s book would have probably felt too fussy, bordering on the Victorian.)

â€śI had to make it personal,â€ť Clifford says of his choices in the book, which was designed by his New York firm, Think Studio. â€śThere are a million people who could have been included, so I had to focus on the designers who influenced me, or who I thought were important. In those cases, their work may be very different from what I do, but I appreciate how they think and how they solve problems.â€ť 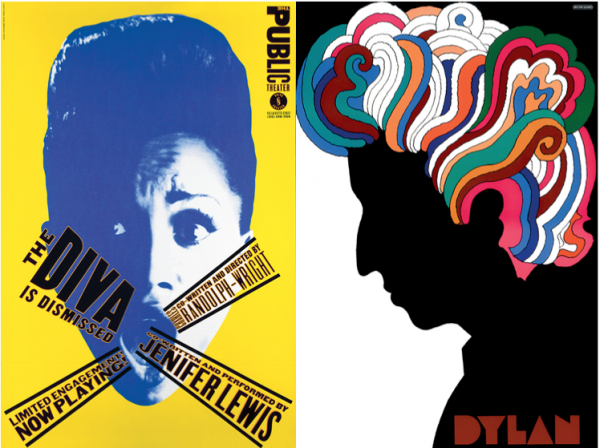 For example, you wonâ€™t find many traces of April Greimanâ€™s aesthetic in Cliffordâ€™s work, but he admires the Los Angeles designer, so into the book she went. Nor did Clifford limit himself exclusively to graphic designers. Instead, he salted Graphic Icons with fine artists such as Russian Constructivist Alexander Rodechenko, television-graphics pioneer Georg Olden, infographics visionary Will Burtin, and furniture designer Michael Vanderbyl. â€śGraphic designers are influenced by architecture, fashion, and nature, more than just graphic design,â€ť Clifford says. Accordingly, the roster of icons in Cliffordâ€™s book reflects that.

Another aspect of graphic design that people donâ€™t talk about muchâ€”but that Clifford is happy to discussâ€”is its accessibility, which is to say that good graphic design can often be had cheap. An original Milton Glaser poster of Bob Dylan, packaged inside the balladeerâ€™s 1968 â€śGreatest Hitsâ€ť album, will only set you back around $20, including the LP. The fact that Glaserâ€™s Dylan poster is folded to fit in the album’s sleeve is not really a negative considering thatâ€™s how the poster was originally distributed, making its creases accurate details rather than flaws. 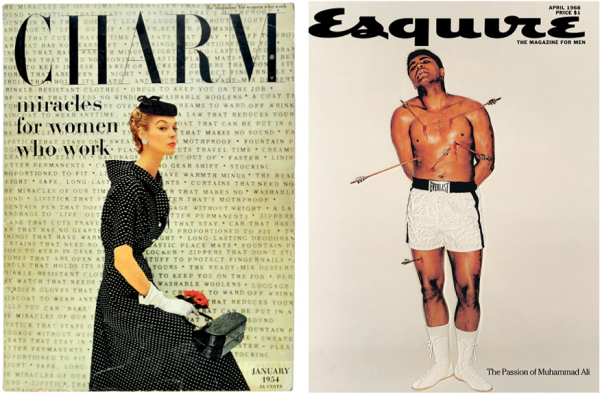 Displaying a graphic art collection is also simple, since it usually doesnâ€™t require acres of wall space or your own private sculpture garden. Indeed, many of the best examples of graphic design in Cliffordâ€™s book are diminutive magazine and book covers. The January 1954 issue of â€śCharm,â€ť designed by Cipe Pineles, is particularly eye-catching, positioning a model in white gloves and a black cocktail hat in front of a wall of capitalized words promising â€śMiracles for Women Who Work,â€ť from â€śShoes to Keep in Desk Drawer or Lockerâ€ť to â€śDrugs to Keep You on the Job.â€ť

Occasionally, Modernism encompassed flashes of Pop Art and even Surrealism, as seen in George Loisâ€™ â€śEsquireâ€ť cover from April 1968, which depicted Muhammad Ali as an arrow-pierced Saint Sebastian. Most of the examples in Graphic Icons, though, have more in common with Bassâ€™ movie poster. Thus, the tasteful and plain geometry of Alvin Lustigâ€™s cover for a 1953 book called The Final Hours by JosĂ© SuĂˇrez CarreĂ±o is interrupted by a fractured column of black, whose jagged edges pierce Lustingâ€™s otherwise polite composition. 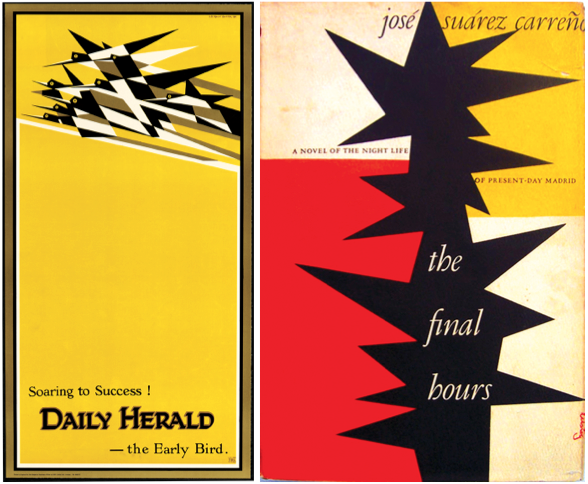 Left: Edward McKnight Kauffer’s poster for the “Daily Herald” newspaper from 1918. Right: A book cover by Alvin Lustig from 1953.

Of course, the ability to thrive within commercial spheres, where the goal of design is ultimately to sell things like records, magazines, and books, is what sets graphic art apart from the so-called finer stuff. Unlike paintings and sculptures, the graphic arts must earn their keep, if you will, and while everyone knows where to find oils on canvas and cast bronzes (art galleries and museums), strong examples of graphic art routinely pop up in the unlikeliest of places. â€śIâ€™ve always liked the bold simplicity of the Tide logo,â€ť Clifford confesses when pressed for an example of what you might call a guilty graphic-art pleasure. â€śItâ€™s been tweaked over the years,” he adds, â€śbut itâ€™s surprisingly consistent.â€ť

(All images courtesy of John Clifford. If you buy something through a link in this article, Collectors Weekly may get a share of the sale. Learn more.)

Double the Fun: The Husband-Wife Team Who Made Everyone Want to Chew GumCheap Thrills: The Freakish Fantasy Art of Mexican Pulp Paperbacks