Will an Inverted Jenny Turn the Stamp World Upside Down Again?

This weekend, on Sunday, September 22, 2013, the William H. Gross Stamp Gallery at the Smithsonian National Postal Museum opens to the public. The gallery has been in the works since the fall of 2009, when Gross, who made his billions (yes, plural…) as the founder of the Pimco Total Return bond fund, donated $8 million to the National Postal Museum.

“Robey saw the discrepancy right away.'”

Among the 20,000-plus items on display in the 12,000-square-foot space is a block of four 24-cent Inverted Jenny stamps, so named because the blue intaglio vignette of a Curtiss JN-4-H biplane (commonly called a Jenny) in the 1918 stamp was printed upside down in relation to its carmine-colored frame.

As a tie-in to the Gross Stamp Gallery’s opening-day festivities, the U.S. Postal Service is releasing a new version of the Inverted Jenny as a $2 stamp in a variety of formats, from a First Day Cover for $2.44 to a limited-edition boxed collector’s set that includes a 48-page book on the stamp, color proofs, and sheets of cancelled and mint stamps for $200 (pre-orders for all versions begin on September 20 at USPS.com; a ceremony for the $2 Inverted Jenny takes place at the Gross Stamp Gallery at 1 p.m. on September 22). 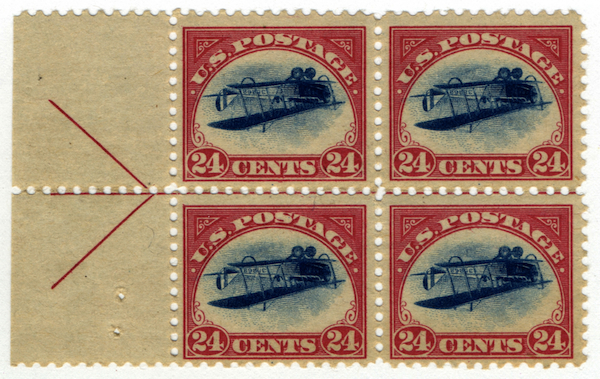 Top: A 1918 Inverted Jenny (left) and its 2013 “re-issue” (right). Above: Visitors to the Gross Stamp Gallery will be able to see a block of four Inverted Jennys.

The 24-cent was the first U.S. airmail stamp, rushed into production during the week of May 6, 1918, so it would be ready for sale on the 13th, in time for the first airmail deliveries via specially modified Curtiss airplanes on May 15. It’s likely the stamp’s inversion occurred when a harried worker at the Bureau of Engraving and Printing had incorrectly fed an inked 24-cent frame sheet into the hand-operated spider press (so named for its spider-like, spoked wheel).

In fact, some collectors were counting on that, or something very much like it. Even in 1918, stamp collecting was a popular pastime of the idle rich, and rumors of the airmail stamp’s tight deadline, as well as its two-color design, had piqued the interest of collectors, who were hoping for an error caused by its hasty release and multiple plates. One such collector was William T. Robey, who walked up to a window of a Washington, D.C., post office on the morning of May 14 to see if any more airmail stamps had come in since the previous day. The clerk produced a sheet of 100 of the new airmail stamps, not noticing that all the Jennys had been printed upside down. 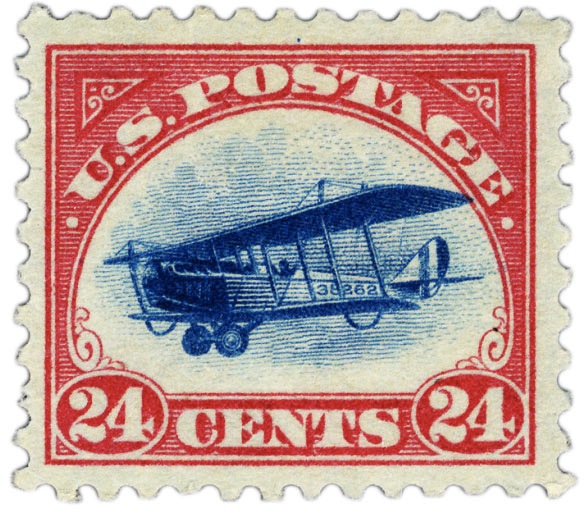 This is what the vast majority of the 24-cent Jennys look like.

Robey saw the discrepancy right away, but the clerk didn’t notice it until Robey had made his purchase and asked him if there were more where those came from. By that afternoon, postal inspectors had tracked down Robey, first offering to buy the stamps back from him, then threatening to take legal action in an effort to remove the goofs from circulation. Spooked, Robey reached out to a few stamp dealers, one of whom, Eugene Klein of Philadelphia, paid him $15,000 (the equivalent of almost a quarter-million dollars in today’s money) for his $24 purchase. Klein flipped the sheet for $20,000 to a collector named Edward H.R. Green, who cut the sheet into singles and blocks of four. 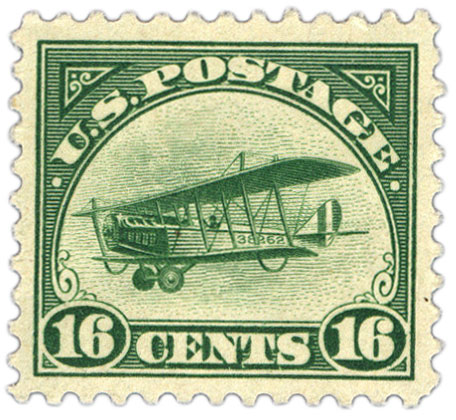 Within six months, airmail postage had dropped from 24 cents to 16 cents.

One early buyer paid Green $250 for a single stamp from that sheet, bringing the value of the sheet up to a theoretical $25,000. Recently, though, a single Inverted Jenny sold for almost a million. Gross owns one of Green’s blocks of four, which is on view at the gallery that bears his name. Some of these have sold for millions. That’s a lot of money for a stamp most collectors agree is not technically rare. After all, there are 97 known Inverted Jennys out of that original sheet of 100. Many stamps from around the world are a good deal more rare than that, but in this case, demand and legend trumps scarcity. 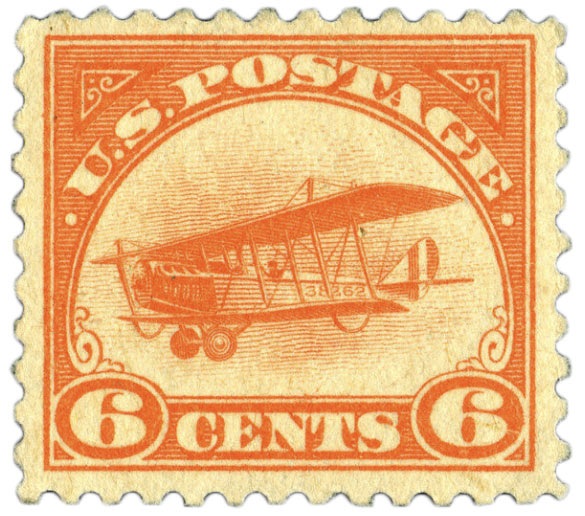 The last stamp to feature a Jenny, issued in December, 1918, had the same airmail rate of six cents as the 16-cent stamp, but the 10-cent special-delivery fee was charged separately, hence the change from 16 cents to six.

What’s even more interesting, though, than the fixation on price that surrounds the Inverted Jenny is that back in 1918, the cost of sending a letter via airmail actually dropped twice within about a year. The first price cut occurred in mid-July, just six weeks after airmail service was launched, when the price of sending a letter weighing an ounce or less fell to 16 cents. For that stamp, the same Jenny vignette was used, but the frame was altered to reflect the new price, while the color of the stamp was changed from blue vignette and carmine frame to green for both.

The 16-cent Jennys were sold until 1922, but in December of 1918, postal officials decided to produce a third airmail stamp that did not include the special-delivery-service fee of 10 cents in its rate. Thus the orange, six-cent Jenny, which was finally replaced by a two-cent, non-Jenny airmail stamp in July of 1919. Adjusted for inflation, that last rate comes to 27 cents today, which makes the current postage rate of 46 cents seem like something less than a bargain. Twenty-four cents for an Inverted Jenny, on the other hand, well, that would be sweet. 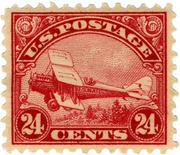 Flying the 'Freak' Flag: Documentary Will Reveal Why You Should Care About StampsJohn Hotchner Exposes Philatelic Errors, Freaks, and Oddities

Airmail StampsInaugurated in the early 20th Century, airmail was a premium service which …