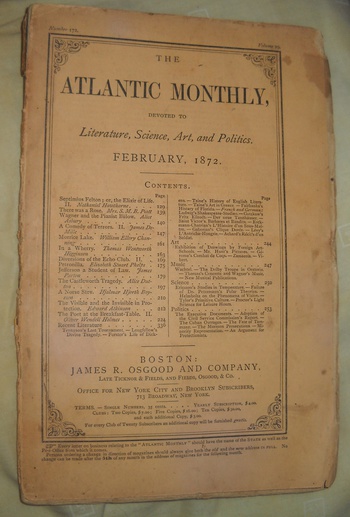 I picked this up tonight also. I am not sure if it is valuable, but it is definitely significant. It is much like a Reader's Digest. It contains various stories and opinion articles. What is siginifcant about this is it contains the story "Septimius Felton; or the Elixir of Life" by Nathaniel Hawthorne, most known for his book "The Scarlet Letter". Hawthorne died in 1864 and his wife and daughter sought about publishing his unpublished and unfinished works. This was his first postumous publication, and one of the first times it appeared in publication. Also in the book are "A Comedy of Terrors" by James De Mille, "The Poet at the Breakfast Table" by Oliver Wendell Holmes, and "In a Wherry" by Thomas Wentworth Higginson. What surprised me is at the bottom it says a yearly subscription costs $4 and a single issue cost 35 cents, not cheap by any means for those days!