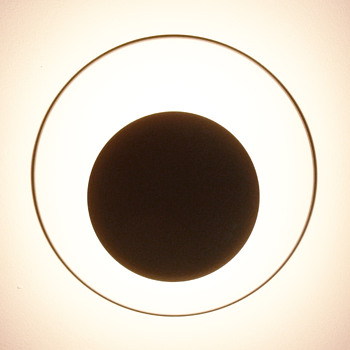 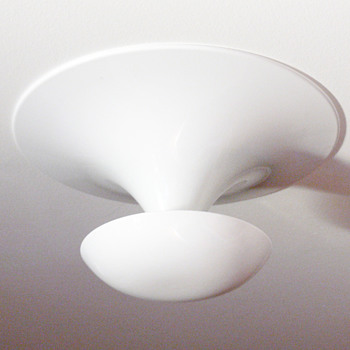 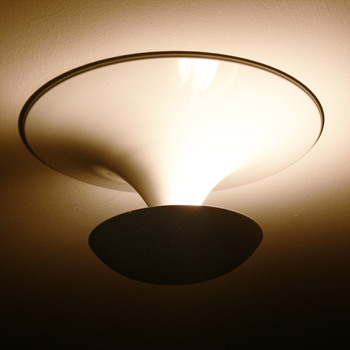 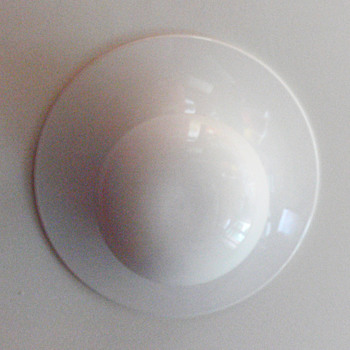 This FUNNEL lamp is omnipresent at home: you can see four of them in different rooms of the house: the bedroom, the guest bedroom, the living-room and the dining-room... in fact Carlos had the house's ceilings lamp-less for several years until he found what he thought to be the perfect ceiling lamp, and that was the FUNNEL one!

It was designed in 2001 by the Spanish designer Ramón Benedito and is manufactured for Vibia, a Spanish company specialized in lamps. It comes in three sizes and in different colours (as far as i know in white, black, golden, red and silver) and it can used as a ceiling lamp as well as a wall one, and I have seen pictures of it being used as a tabletop lamp. It works with halogen bulbs.

When I first saw it I liked the shape but I thought it was sort of weird. But once I saw one working I felt in love with it. As you can see on the pictures, it is pretty "transparent" when the light is off, but when you swith it on ll you see is a black circle around it and the bottom part becomes absolutely black (as you can see on picture 4, which has been taken from right under the lamp - I was lying on the couch to take it ;) )). The light it gives to the room is strong and very uniform and very, very nice.

I have another design from him at my place: a wok pan he designed for the Spanish brand Castey in 2004. I should take a pic of it and show it to you soon!

Ramón Benedito (Barcelona,1949) is one of the most outstanding Spanish designers of hi-tec objetcs. In the mid 80s he created one of the few Spanish experimental design groups: Transatlantic.

Ramón Benedito was born in Barcelona in 1949 and studied design in the prestigious Elisava design school. In a begining he worked mostly in massive plastic designs and, in the 1980s he focused in hi-tec design: scientific machinery, hi-fi, precission instruments, telephones, optical machinery... and so his designs are highly rational and precise.

Amongst his designs we can see fax machines, coffee machines, taps, office furniture systems, chairs, lamps, pans or even a car.

Wall Lamps and Sconces
See all