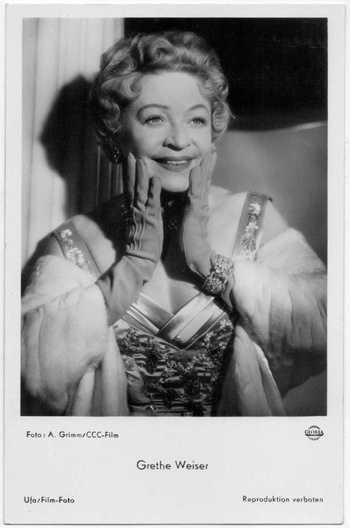 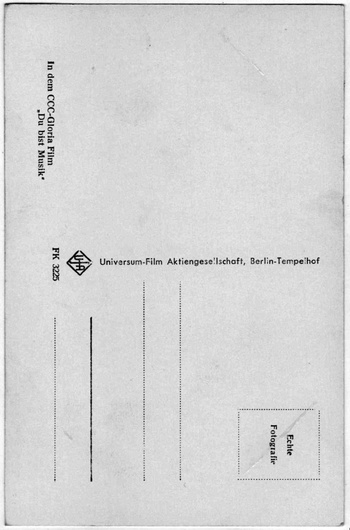 This is a black & white photo postcard of Grethe Weiser - Circa 1956
** Grethe Weiser (1903-1970) was a German actress. Born in Hanover, she spent her childhood in Dresden. She escaped from her dominant and sometimes violent father by marrying a Jewish confectionery manufacturer in 1920. Quite quickly she established herself in the cabaret scene in Berlin, especially after her husband became a leaseholder of a nightclub on the Kurfürstendamm. Her film debut came soon after in 1927. Weiser had a lifelong relationship with Hermann Schwerin, an UFA film producer, which began in 1934, but the couple were not married until 1958. Her previous marriage had been dissolved in 1934. Weiser, unusual for an actress, avoided becoming a member of the Nazi Party. She managed to finance and arrange for her previous husband and her son to survive the Nazi years in Switzerland, as well as at the same time continue her career in Germany. She died after a road traffic accident in Untersteinbach near Bad Tölz in Bavaria and is buried in an "Ehrengrab" (Honorary Grave) at the Heerstraße Cemetery in Berlin.
** Source for above - wikipedia
Photo by: A. Grimm / CCC-Film - Ufa / Film-Foto
On the reverse is the description:
In dem CCC-Gloria Film "Du bist Musik" (You're Music - 1956)
Card printed by: Universum-Film Aktiengesellschaft, Berlin-Tempelhof
Card Nbr - FK 3225 - (unused)

Marilyn Monroe Ladies of the Chorus...
$38