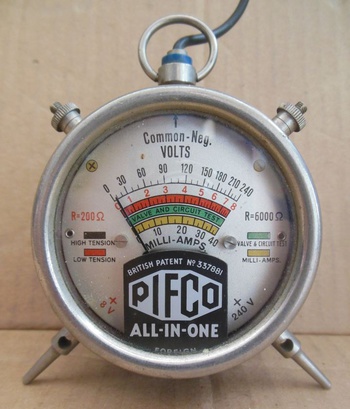 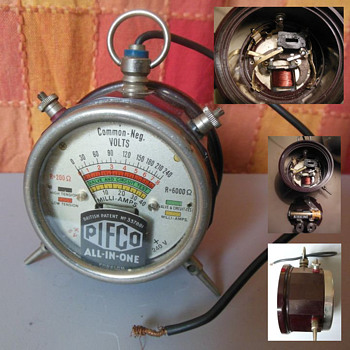 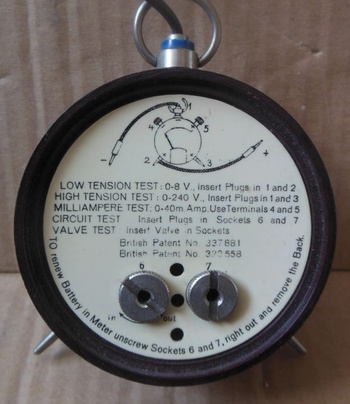 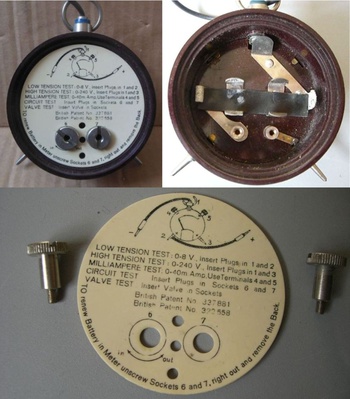 This is a 1920 - 1930's Hobbyist's Multimeter, with 5 ranges and a non-mirrored scale of about 1.5" span (0 to Full Scale).
It has a Bakelite 3" diameter, 16 sided case - giving an almost rounded appearance - 5 of the sides have terminals.
16 sides - The designer was probably thinking ahead and allowing for the possibility of more terminals in the future.

The instruction sheet (I don't have an original, I downloaded one from the internet) claims that it is possible to test every part of a Wireless Receiver.

PIFCO ALL-IN-ONE RADIOMETER
The Sherlock Holmes of Radio.
Saves Worry, Touble and solves all difficulties.
Can be used for testing Motor-Car Lighting Circuits.
H.T. Batteries and Accumulators up to 240 Volts.
Tests Everything.
Insulated Test Prods 3/6 (3 shillings and sixpence) per pair.

The word foreign appears on the front glass, which probably means Germany. Later on in the 1930's they were made in Germany - with all the writing in German.

The condition of some Pifcos I have seen on the web are stunning, polished and mint condition with boxes and all accessories.
My example unit (I paid £3 for it) is well worn and has battery corrosion inside from a leaky battery - though that can be cleaned off.
It did not come with a box or any accessories.
I have not used this meter to test anything yet.
It has a battery holder inside for a 1.5V dry cell.
The meter needle on mine rests at a little bit above zero and when connected to a power supply of 6.92 volts it reads 8 Volts.
So that is not very accurate.
I partially disassembled it to look inside - looking for a possible way to get to the meter mechanism, to calibrate (span and zero) it.
Alas, I cannot see a way to fix this, but that is okay . . . I would not use it seriously for testing modern circuits . . . the item is interesting and is nice to look at.

Radio Parts and Tubes
See all 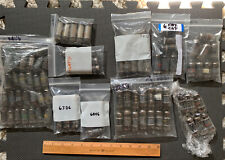