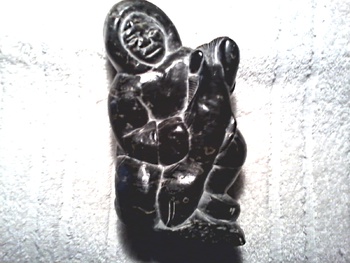 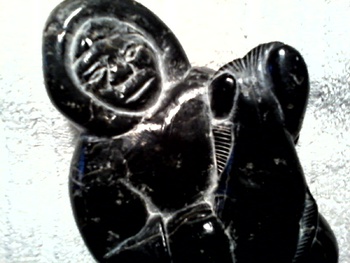 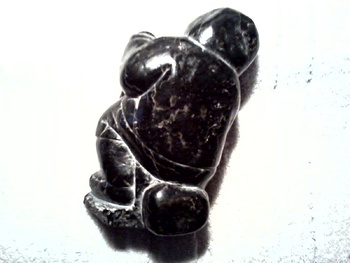 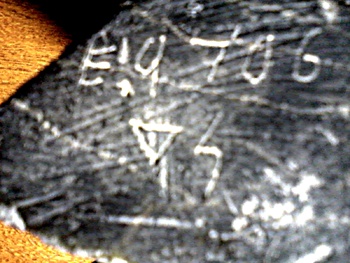 This little 5 1/4" guy was on the shelf with the ceramics and odd bits at GW yesterday. He's pretty heavy for his size and the stone seems quite hard. There is a lot of yellowish veining running through the stone itself. I immediately recognized it as an Inuit carving from the markings on the bottom. I had just seen an episode of the BBC's "Antiques Roadshow" where a lady brought in her father's collection of sculptures from a trip he had taken to Alaska. Surprisingly these can go for hundreds to thousands ! The marks on the bottom are Inuit syllabic writing along with some numbers. Depends on the orientation. They could be the artists signature or the title of the piece or both. I found some syllabic charts online but could only find two of the marks. The rest is a jumble. The triangle is " i" . The mark next to it that looks like an "L" with a leg is " sa" So in the order it's written maybe "isa" The second line looks more like numbers with some symbols. That's a mystery. Anyone read or write Inuit ? I'd love to know what this says. -Mike-
UPDATE:
A bit more research solved the mystery numbers on the bottom. They are the old Canadian government disc ID number . This number was the personal ID for an Inuit carver.The disc number ID system began in the 1940's and ceased by the 1970's. Now I have an age range, so I should be able to find out who the artist is as long as this piece isn't a fake .

NOTE : The syllabics pic was upside down and they are read after the ID numbers.This number belongs to the artist Isa (Asa) Smiler born in 1921 and who died in 1986. He belonged to the Inukjuak community in Port Harrison Canada and has had his work exhibited at numerous galleries ! Got this info from here : http://www.katilvik.com/content/bio/view.php?bid=1763&criteria=disc_num&q=E9706

Info Courtesy of spiritwrestler.com
Isa Smiler
Inuit
Inukjuak, Quebec, Canada
(1921-1986)
“Born in [Inukjuak], Isa [was] always … a hunter, trapper and a fisherman who [lived] off the land. He began carving in 1948, after Jim Houston … had been on a visit to the settlement. His favourite subjects [were] the Arctic animals of his environment, especially otters. …[Isa signed] his work with his disc number, syllabics or Isa. S.”*
Isa’s autobiography was featured in the Summer-Fall, 1977 issue of “Inuktitut”. His wife Lucy was an artist, and his son Daniel is a carver living in Inukjuak.
*from “The Inuit Artists of Inoucdjouac, P.Q.”, 1978
Excerpt courtesy Inuit Art Section.