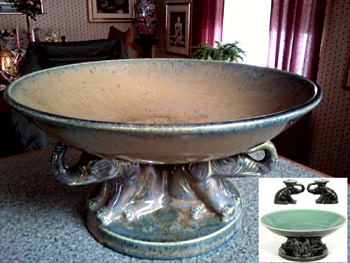 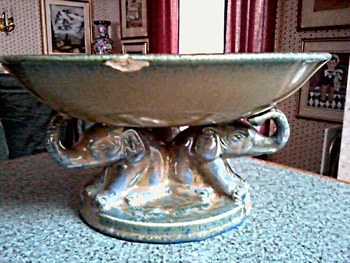 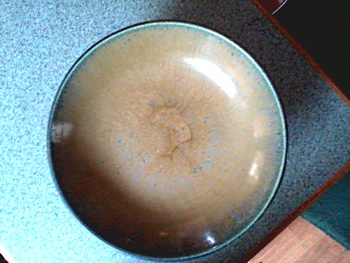 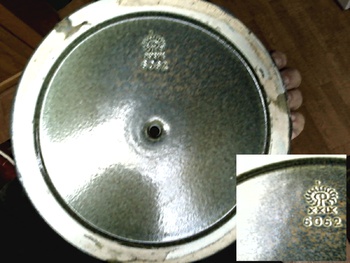 Finally able to get out as the weather is much better here in Ohio it's now a balmy 25 degrees. I am beside myself with this find at Goodwill in Cleveland. What a way to start the New Year. My first piece of Rookwood and it's incredible ! It's a large heavy 11"x 6" console bowl supported by three elephants. Rookwood also made two matching elephant candle holders to go with this bowl, but I didn't see those anywhere. It's marked with the Rookwood incised mark and has the Roman numerals for 1929 below it and then the style number 6062. It does have a chip in the outside edge of the bowl. It looks much bigger in the pic for some reason and is more of a shallow flake. It probably could be easily repaired professionally, but that's not in the budget at the moment. The color looks to be two layers one of an olive drip glaze over the blue underneath. I found one online that was all blue in an Antiques Roadshow appraisal video from 2012.

Note: I had this one appraised a few days ago and my appraisal was significantly less than the "Roadshow" bowl. While this is a rare piece it's only about 200- 250 "as is". Damage even minimal drops value by 50%. Ten years ago this bowl would have sold for ten times that much. Art pottery is in a slump right now I guess.

A blue one at Live Auctioneers as well: This one has a hairline crack in the bowl. The auction is current though.

I'm thinking OMG maybe mines rarer because it's a green production piece...but then there's the chip and it could be a fake.....but I don't think so. AWESOME !! -Mike-