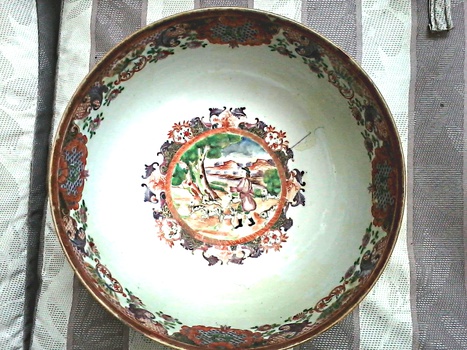 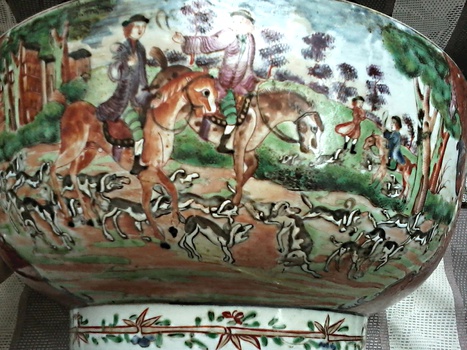 When I found this five months ago I had it appraised and was happy with the quote to a point. I was watching "Antiques Roadshow" yesterday and saw Lark Mason commenting on two huge Chinese jars that wound up being worth $25,000.00. I found out from a friend that he was reachable through igavel.com. So I asked him if I could send the pictures of this bowl and he said "Sure I'd be glad to look at them" So I sent him the pictures and his comment was..."Looks good to me" in it's current state his estimate was 2000-3000 dollars. If it were unrestored and perfect 5000 and up/ He also said he would be glad to include it in his upcoming auction in April if I wished to sell it. He is a very nice and helpful person. Answering my e-mails very quickly. This was quite a bit more than a previous appraisal of only 900-1500 dollars. -Mike-

Note: 3/21/14 Having arrived in New York and getting a hands on appraisal, the value has been increased to $2500-$3500 dollars. I was told it was a very nice piece despite the early restoration work. -Mike-