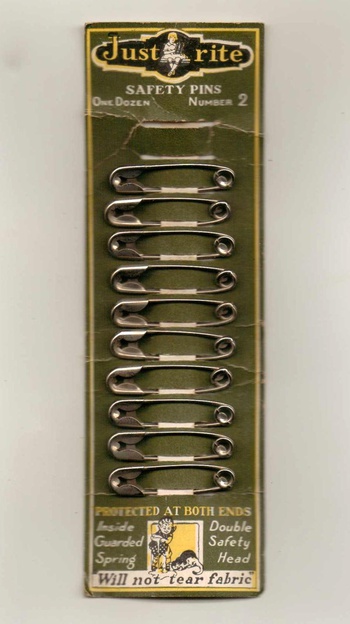 This is a vintage (circa 1940's-1950's) Just-Rite brand Safety Pins card which held one dozen number 2 size safety pins (10 remaining) - There is no company name or address, only the Just-Rite brand name. They are made of a non-magnetic white metal - either stainless steel or plated brass.
DEFINITION OF SAFETY PIN - The safety pin, also known as a baby pin, is a variation of the regular pin which includes a simple spring mechanism and a clasp. The clasp serves two purposes: to form a closed loop thereby properly fastening the pin to whatever it is applied to, and to cover the end of the pin to protect the user from the sharp point. Safety pins are commonly used to fasten pieces of fabric or clothing together. They were widely used to fasten cloth diapers (nappies), as the safety clasp prevents the baby from being jabbed. Similarly, they can be used to patch torn or damaged clothing. Safety pins can also be used as an accessory or jewelry, such as earrings, chains, and wristbands. Sometimes they are used to attach an embroidered patch.
INVENTION OF SAFETY PIN - American Walter Hunt is regarded as the inventor of the safety pin that bears resemblance to those used today. The safety pin included a clasp that covered the point and kept it from opening, and a circular twist at the bend to act as a spring and hold it in place. After being issued U.S. patent #6,281 on April 10, 1849, Hunt sold the patent to W. R. Grace and Company for $400 (roughly $10,000 in 2008 dollars). W.R. Grace and Company would make millions of dollars in profits from his invention.