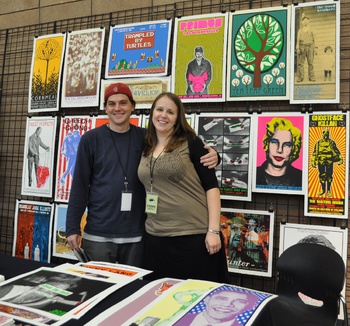 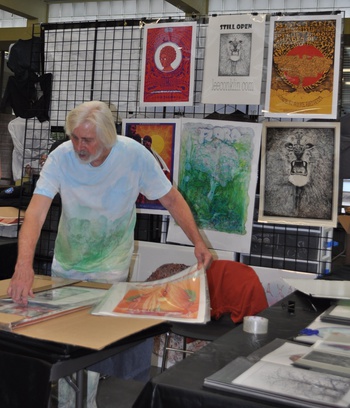 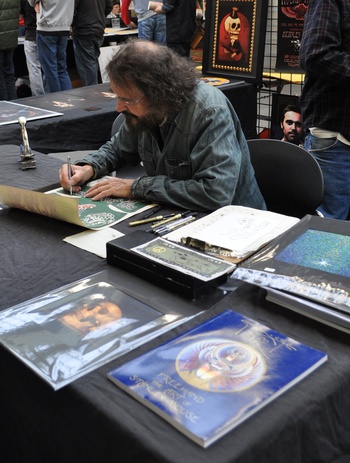 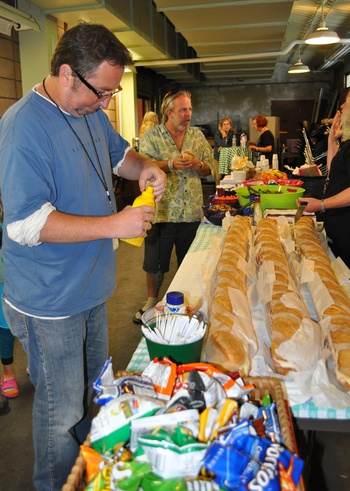 In the left photo are the very kind folks from Hosco Press of Omaha, Nebraska. They gave everyone who worked the event a free signed-and-numbered copy of the poster they had created for the show. Super cool. I wanted to buy that Trampled by Turtles poster for my son, but ran out of dough.

In the center are photos of two legends of the SF poster scene. Center left is Lee Conklin, who is perhaps best known for the lion album cover he did for Santana. That image began as a poster for a couple of shows at the Fillmore West. Santana was on one bill, opening for Steppenwolf with the Staple Singers as the second act, while the other show featured an unlikely pairing—the Grateful Dead and the Preservation Hall Jazz Band, with the Sons of Champlin as the opener.

The center-right photo is of Stanley Mouse, who created some of the most famous psychedelic images in rock 'n' roll. These days he continues to produce terrific new work, but many people bring their old Avalon posters to these shows, as seen here, which he signs and doodles for a fee.

Finally, on the right is a photo of an artist from Southern California named Scrojo, who is seen here (he's on the left, holding a jar of mustard) taking his turn at the six-foot long sandwiches that a few Rock Poster Society volunteers had purchased to feed the artists. I brought a Fillmore poster for Scrojo to sign, which he did for free (the show was for a band called Gogol Bordello; you have not lived until you have seen them live). I also purchased a small sketch from him for 15 bucks. Nice guy. Wish I could have bought more.