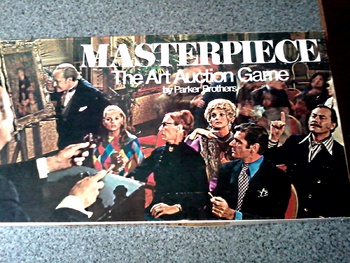 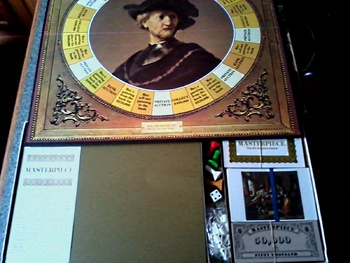 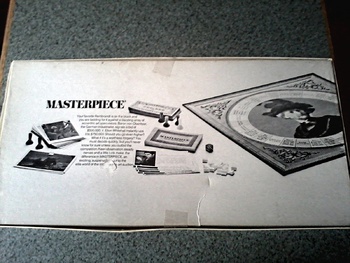 I picked up this board game yesterday at GW's so I thought what the heck I'll post it. It's the original 1970 version of Parker Brothers "Masterpiece". We lost a lot of games one year when the basement flooded years ago and this was one of them. I loved this game when it first came out. It fit right into my interest in art and antiques. It's kind of a cross between Clue and Monopoly. You assume characters identities and then wheel and deal for paintings against your competitors. It's in pretty good shape too. It was taped so I bought it without checking it.but for two bucks it was worth it. Turns out it looks like it was hardly played every thing inside is pristine. The box bottom is a little crushed in one spot, but that's to be expected from handling it. -Mike-

Masterpiece is a board game by Parker Brothers, now a brand of Hasbro. Players participate in auctions for famous works of art. It was originally published in 1970 by Parker Brothers, and then published again in 1976 and 1996. The game is now out-of-print. In this game, players compete with other players to bid on potentially valuable paintings, and negotiate with other players to trade these works of art, build a portfolio, amass money, and win the game. The top value of a painting in the 1970 edition is $1 million, and $10 million in the 1996 edition; however, getting the full value for the painting requires some luck in landing on the right square on the board to sell a painting to the bank.
The game utilizes bluffing skills because the players possess asymmetrical information about the value of the paintings they possess. Some pictures are known to their owners to be 'forgeries' with an actual value of zero. These 'forgeries' can, however, be resold to other players or to the bank with the value hidden.