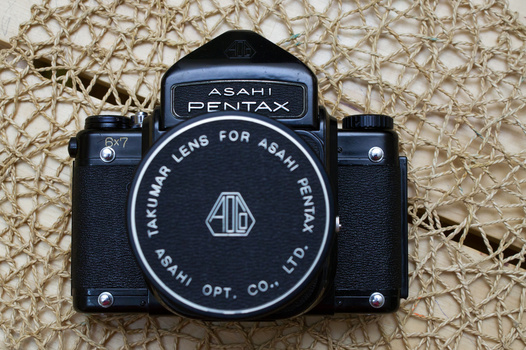 The Pentax 6×7 is quite similar to a regular 35mm SLR camera. It uses either 120 or 220 roll film, which produces ten or twenty (twenty-one for the 1969 version) 6×7 format exposures respectively, with each exposure of 56×70mm area. A small knob on the right-hand side of the camera selects the film type, and also the film pressure plate inside has positions for either type, the thickness of the films being different. The standard equipment includes the Super-Multi-Coated TAKUMAR/6×7 1:2.4 f=105 lens and the removable pentaprism finder that shows exactly the exposed image. A very useful addition is the separately available left-hand grip with accessory shoe.
The camera is completely battery dependent. It does not work without film, unless the film counter dial is rotated away from the empty position and closing the back while still holding the dial. The frame counter is incremented only with film in the camera. The camera locks when the counter dial has reached the last frame. The automatic frame counter resets only if the shutter is released before opening the back. If the shutter is released without a functioning battery, the camera halts after the mirror is raised. A small flush button on the right-hand camera front, just below the shutter-release button, is provided for reactivating the mirror/shutter cycle. Depressing the shutter release once more completes the cycle.
The fingernail operated camera back latch is situated at the lower left-hand corner. The left film chamber takes one roll of unexposed film that is secured by a centre-pin connected to the left key at the camera base. The take-up spool to the right is secured by a similarl devise is at the right-hand side. The frame counter resets automatically whenever the back is opened. 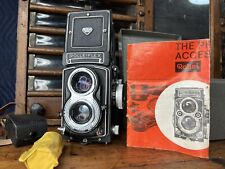