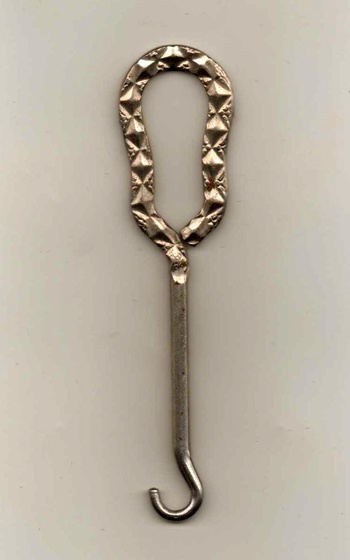 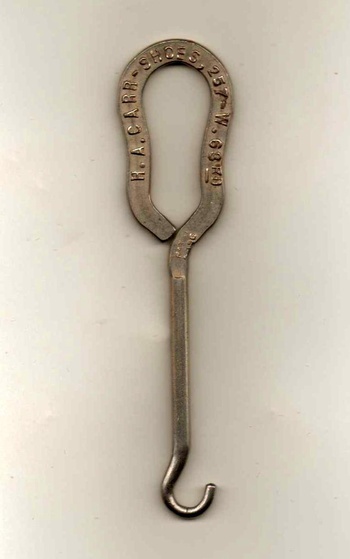 This is an early century (1910-1922) advertising shoe button hook.
It is made of metal and is 3 3/8" long / ornate design on one side and other side is flat with advertising for H. A. Carr Shoes, 257 W. 63rd St. (which I found to be H.arry A. Shoes in New York City) - The first reference found to H.A. Shoes was 1914; also found a newspaper advertisement from 1919, and a 1922 newspaper advertisement mentioning a move to a new store address location one block away at 327 W. 63rd. - No references found for the store after that date.
** Buttonhooks came in a variety of designs. To use the implement on a shoe, one firmly grasped the handle, and then inserted the steel hook through the eyelet, grasping the button and pulling it through. The buttonhook was generally the size of a fork although it ranged in size from less than an inch to around 2 feet in length. Most were used for shoe buttons, spats and gaiters, although the smaller types (glovehooks) were used for buttons on dresses, sleeves and men's stiff collars. Most appeared when the feminine high buttoned boot became popular in the 1880s. Buttonhooks can usually be dated between 1880 and 1915 and the majority found today date to between 1890 and 1910.