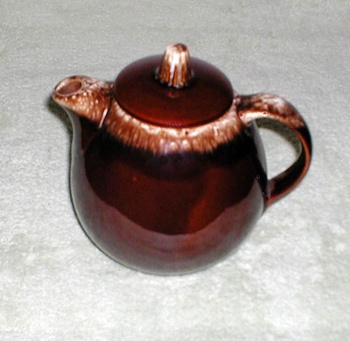 This is a vintage 1960's teapot made by Hull Pottery in the "brown-drip" pattern. This pattern was made from 1960-1985 and used on a very wide variety of kitchenware including teacups, serving platters, beanpots, dishes, cookie jars, kitchen canisters, and even a gingerbread man. - It is 6 1/2" tall and embossed on the bottom with the Hull Ovenproof USA mark.
*** Hull pottery began production in 1905 in Crooksville, Ohio. - The early lines consisting of common utilitarian stoneware, decorative tile, and semi-porcelain dinnerware. During the 1920's, Hull began expanding the variety of the company's product line to art pottery and also began using a broader variety of colors and glazing techniques. By the late 1930's through 1950's, Hull's product line had expanded to include piggy banks, liquor bottles, and lamps. In the late 1960's through the mid-1980's, the company changed its production from artistic lines to predominately "House 'n' Garden" serving ware and Imperial florist ware. In 1986 the company ceased operations and closed the plant due to multiple union strikes and foreign competition.