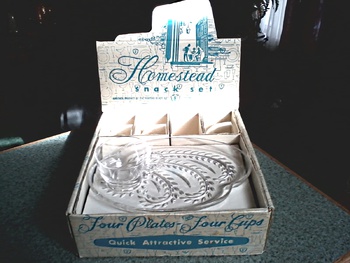 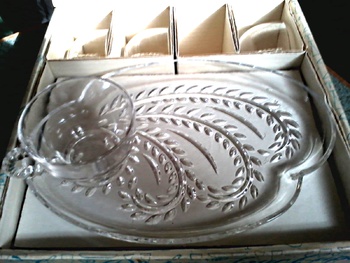 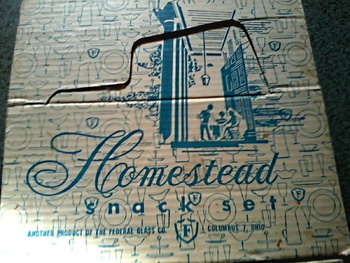 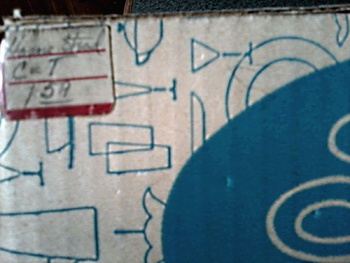 It's not very often you find fifty or sixty year old dishes in their original box with an original price tag. So when I found this Federal Glass Co. "Homestead" Snack Set I could hardly pass it up. It has four cups with bead handles and four plates with cup wells in an oval palette shape with a wheat sheaf pattern. All are in perfect unused condition. Probably bought and put away or maybe even new old stock. The original price tag says a buck fifty nine. I only paid forty cents more sixty years later ! -Mike-

The Federal Glass Company
Courtesy of k and m antiques.com
The Federal Glass Company was established as a hand operation in 1900 in Columbus, Ohio. In the beginning they made pressed wares. Some of the early products had needle etchings. Federal had the foresight to anticipate the public demand for large quatities of reasonably priced glassware. They made the switch to automation and by the 1920's they were one of the foremost companies in the production of cheap machine-made tumblers and jugs. During the 1930's Federal was one of the leaders in the production of machine pressed, mold etched colored dinnerware. In the 1940's the firm expanded into the food service industry. During the next few decades it became a leading supplier to commercial institutions worldwide. In 1958, the company became a division of the Federal Paper Board Company. Federal remained active in the production of glassware for many years. A popular Depression pattern--Madrid--was even reintroduced as "Recollection" glassware as part of Federal's American Bicentennial celebration. This later amber issue was marked with a "'76" and the color is slightly darker than the color of the original Madrid. After Federal's closing in 1979, Indiana Glass Company acquired these Federal Recollection molds. The date was removed and pieces were made in crystal, light blue and pink.