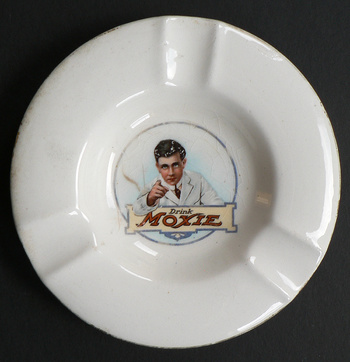 This is an advertising piece by Moxie, probably for use in soda fountains. I have no idea of the date, but would guess it to be pre-1930 at least. I found it on Ebay and the seller had another one in really amazing shape. Of course bidding on that was fast and furious. I placed a bid on this one and won it handily for a mere $8.

It's white ceramic material of some kind with a gilded gold edge, mostly worn. There is substantial wear to the logo (the "Moxie Man" as he was called), but not enough to take away from my viewing pleasure. I collect advertising ash trays, and this is one of my favorites.

If you've never tried Moxie, you should. BevMo often carries the original drink in their soda section. It has a very "earthy" taste, as if you're chewing on a root of some kind. Moxie was one of the very first mass-produced sodas in America.