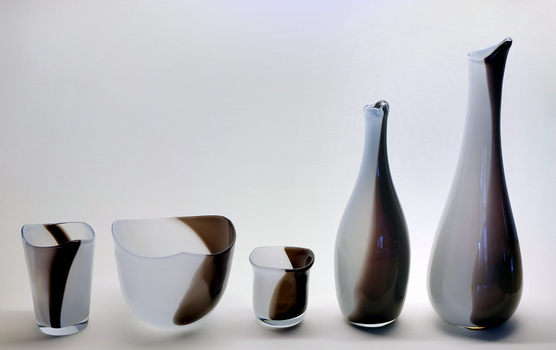 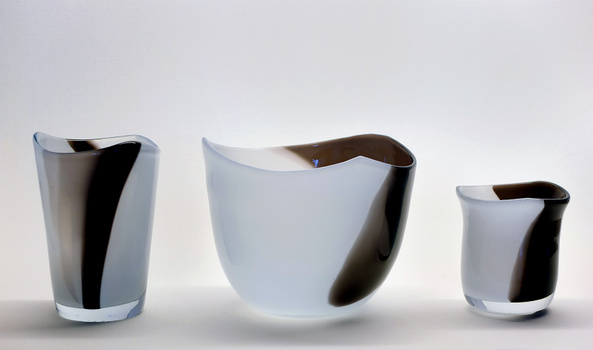 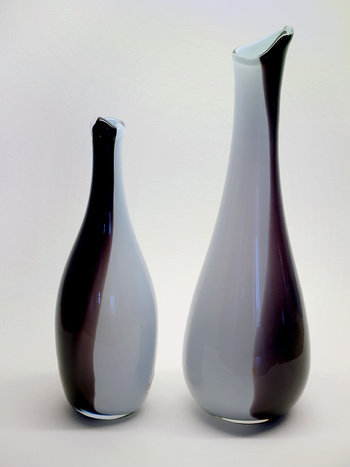 I have previously shown vases from Chimaro series. Here are five more models from the series, created by Gunnar Nylund during his time at Strömbergshyttan in the 1950s. Between 1952/53 to 1956 he was hired as artistic director of the mill. The task was to create a completely new range after Gerda Stromberg, who had been the designer for Strömbergshyttan since the relaunch in 1933, when she and her husband Edward Stromberg took over the factory after Axel Träff, Knut Bergqvist and Eugen Bergqvist. These three had started up Lindefors 1928 (as Strömbergshyttan was originally called) and completed an extensive renovation of the derelict factory premises. Most glass from Lindefors after 1928, was traditional, ground utility glass that went to Mjölby Kristallsliperi (which was owned by Axel Träff) and then exported to Australia. A weekly run of raw glass from Lindefors to Mjoelby by truck. But they also cut some glass in place in Lindefors. Knut Bergqvist also designed a few models, among others bowls and vases in violet, golden yellow and green glass during Lindefors time.

When Lindefors taken over by Strömbergs 1933, Gerda Strömberg quickly drew a host of new models. At the end of the 1940s, was also the daughter in law Asta Stromberg involved in the design, and she drew actually some glass before Gunnar Nylund was engaged, as it looks like from saved documents. However, the design needed another renovation in the early 1950s, and the architect and potter Gunnar Nylund was contracted. Nylund introduced modern lines with more asymmetry and colors. In the early years 1952/53 to 1956, it looks like he designed basically everything Strömbergshyttan took out. He came during that time to radically change the glassworks style. After 1956 ended the contracted partnership with Gunnar Nylund and switched to freelance collaboration, when there was need of it. There are drawings preserved after Nylund dated between 1967 to 1972. How cooperation appeared between the years 1957-66, however, is difficult to say precisely. But it seems they had a lot of models by Nylund, and some had to wait for the launch to the years after the contracted collaboration ended in 1956/57, as I can see it.

Chimaro series came during his first time in the mid 1950s. The glasses are relatively thin and has an opaque pale blue-white underlay shared with a darker brown violet side. They are completely hand worked with "driven" edge and mouth. It requiring precision and skill of the master who does the work. There is a sketch preserved with a number Chimaro models of bowls and vases in different sizes and shapes. As my brother and my father told me so came the idea for these glasses one morning when Gunnar Nylund stood and studied the pattern in the toilet after he peed. He drew quickly down what he saw and then ran to the factory with the sketches and took out some new glass in collaboration with the masters there. If it's a fictional tale or if there is any truth in it all gets each judge. My father, supervisor who worked intimately with Nylund, was a "fictional tale champion" in terms of storytelling, it should not be denied. But the story of how Chimaro series came to is still firsthand information.