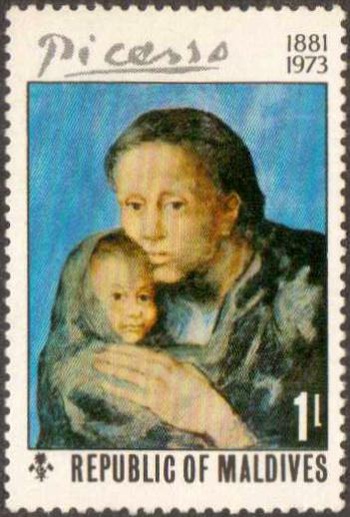 This is a 1974 postage stamp issued by the Maldives (also known as the Maldive Islands) to commemorate the life of Pablo Picasso (1881-1973)
- The Maldive Islands is an island nation in the Indian Ocean consisting of a double chain of twenty-six atolls in the Laccadive Sea south-west of Sri Lanka and India. / A series of six different were issued in May 1974
--
STAMP - Scott# 489 - "Motherhood" by Pablo Picasso, Painter
Denom.: (1) laree / multi-color / Condition: MNH OG (Mint No Hinge, Original Gum)