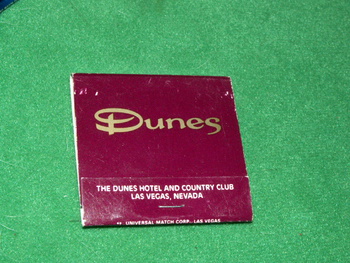 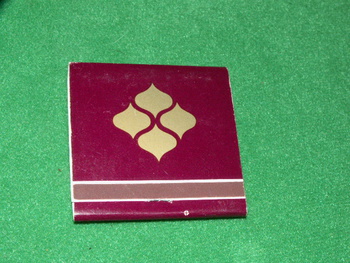 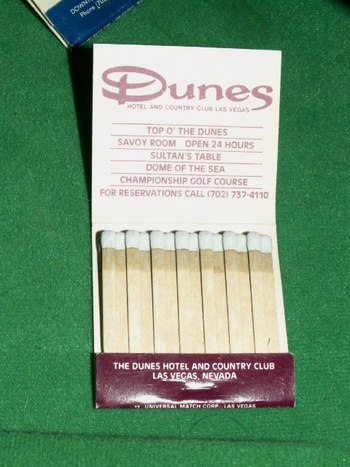 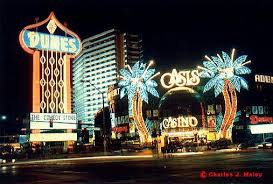 The Dunes opened on May 23, 1955, as a low-rise resort with Hollywood star Vera-Ellen providing the entertainment in the Magic Carpet Review. When the North Tower was added in 1961 it was one of the finest and largest hotels on the Strip. The South Tower was added in 1979. The hotel was built in part with financing from movie mogul Al Gottesman and the Teamsters Pension Fund. The major investors were Joseph Sullivan, Alfred Gottesman and Bob Rice. (It was later believed that Raymond Patriarca, the head of a Providence, Rhode Island crime family was the source of Sullivan's investment.) The resort soon ran into financial difficulties and the casino closed after a year. The resort was purchased in 1956 by two businessmen, Major A. Riddle and Jake Gottlieb, who had dealings with the Chicago Outfit. The resort boasted an 18-hole golf course, a rooftop health spa and a 90 ft long pool. The Hotel's Slogan was "The Miracle in the Desert". In its early years, the Dunes was known for the 35 ft tall fiberglass sultan (1964) that stood above its main entrance. Many top performers, such as Dean Martin, Jayne Mansfield, Liberace, George Burns, Pat Cooper, Judy Garland, Violetta Villas, Phyllis Diller and Frank Sinatra, performed at the hotel. Although it opened to much fanfare, it struggled from the start: one reason was its location at what was then the southernmost part of the Strip. The hotel frequently had to borrow money, and even the Sands Hotel lent its executives to help out, as well as bringing in numerous famous celebrities and entertainers such as Frank Sinatra's surprise appearance dressed as a sultan. On January 10, 1957, in a desperate move to keep the resort afloat, the Dunes became the first hotel/casino in Nevada to offer a topless show, called Minsky's Follies - the first of which was "Minsky Goes to Paris." The State Legislature was "in an uproar", but the show set a record for attendance in a single week at 16,000. In 1961, a 24 story tower was built, bringing the number of rooms up to 450. In 1970, there were unrealized rumors Howard Hughes would buy into the hotel. In 1979, the hotel expanded to 1300 rooms. In the late 1960s, Morris Shenker bought an interest in the Dunes and became its Chairman of the Board. Stuart and Clifford Perlman, founders of Caesars World, agreed to buy the Dunes in 1983 for $185 million, and even took over operation of the property for several months, but the sale ultimately fell through. A second casino in a separate, round building on the site opened in 1983 under the name Oasis Casino at The Dunes. In 1984, Shenker filed for bankruptcy, and soon after, Major Riddle's company (M & R Investment Company) also filed bankruptcy, leading to the resort's sale. The sultan statue, by now on the golf course, caught fire in 1985, reportedly due to an electrical short in its stomach. In 1987, Japanese investor Masao Nangaku purchased the Dunes "for $155 million but could not make it a financial success". On November 17, 1992, the Dunes was sold for the last time to developer Steve Wynn's company, Mirage Resorts, Inc. for $75 million. On January 26, 1993, the Dunes closed its doors for good. A liquidation sale was conducted by National Content Liquidators to clear the property of its contents as a prelude to the building's demolition. Like many of the legendary properties of its era, it could no longer compete with the newer and more exciting megaresorts that were being built. Steve Wynn bought the Dunes and started the redevelopment trend with the demolition of the North Tower. On October 27, 1993, the Dunes was demolished in a grand ceremony that involved major fireworks displays and the use of several "cannon blasts" from the English ship 'HMS Britannia' of Treasure Island Hotel and Casino. Over 200,000 people watched its demise. The Dunes sign itself was lit and read "No Vacancy" as if it were still open. Steve Wynn, along with Controlled Demolition, Inc. stood by and said "Captain of the Britannia, are you ready sir? Prepare broadside. Ready! Aim! Fire!" Cannon shots from the ship were simulated to coincide with explosions along the Dunes property. The neon sign was destroyed and a fireball fueled by 4226 gallons of aviation fuel engulfed the Diamond Tower shortly before explosives brought it down. Everything except the south tower was destroyed "amid a shower of fireworks never before equaled west of the Mississippi." In contrast, the South Tower at The Dunes was demolished 9 months later in July 1994, with no fanfare and minimal media attention. The demolition also held symbolic significance for the city. Many long-time residents knew the Dunes was controlled by the mafia, having been first built with money from it and the mob-controlled pension funds of the Teamsters and Pipefitters unions. The demolition signaled the end of significant mafia control and influence in Las Vegas. For many years, the hotel was owned by Major Riddle from the "Chicago Outfit" and later sold in part to Morris Shenker, an "attorney associated with the St. Louis Mafia, Meyer Lansky, Jimmy Hoffa, and Frank Foster, owner of Athony Alarm". Riddle and Shenker later became a target of the Organized Crime Strike Force in St. Louis. In The Showroom for 2 years, Johnny Elvis Foster starred in his Elvis show For The Love Of Elvis. Morris Shenker was Johnny Elvis Foster's godfather. Johnny was the first Elvis impersonator before Elvis died, on the strip, from 1976 to 1978 at the hotel. The Bellagio now stands in its place. During its construction, workers found four bags of Dunes casino chips that were buried at the site.