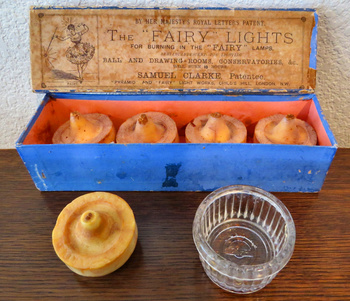 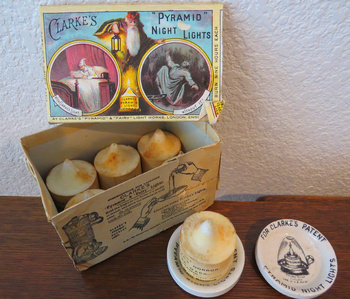 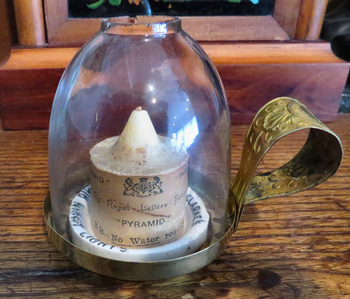 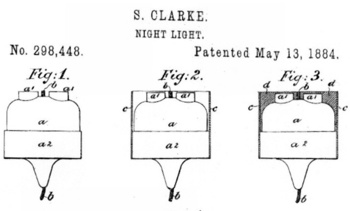 Clarke made candles, not fairy lamps. He commissioned the fairy lamp production to glass and pottery makers to either make complete lamps or parts such as shades, fittings, and bases. He sold them as a means to entice customers to buy his candles. Much like ink is to printers today. He was a marketing genius to say the least.

Clarke's family started making candles in 1844. In 1857, he patented his first "fairy lamp". It was used as a hand lamp and a heat source for his food warmers. In the mid-1880s he started commissioning decorative fairy lamps from glass and pottery manufacturers such as Webb, Stevens & Williams, Royal Worcester, Taylor & Tunnicliff, and several others. Needless to say they were very popular during the Victorian period. He sold his candle business to Prices Candle Co in 1910 but they continued to market Clarke's candles under his name for several years afterward. However, most were Paraffin, not tallow candles.

Clarke's original candles were made from animal fat (tallow). He rendered his own fat at his candle plants in Childs Hill and Cricklewood, England. It was a nasty process, but an important industry before electricity and kerosene began to make candles obsolete, except for the decorative "Fairy Lamp" and elegant "Cricklite".

Clarke registered his candle design in the US in 1884. He protected his patented "two wick" design fiercely and marked all his candles with his trademark with either a paper label or molding it right into the candle.

So, the lowly candle is not what it may seem when it comes to fairy lamps. For the fairy lamp collector, original tallow candles are as difficult to find as fairy lamps.