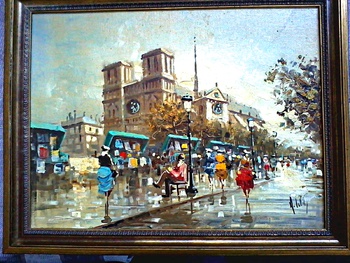 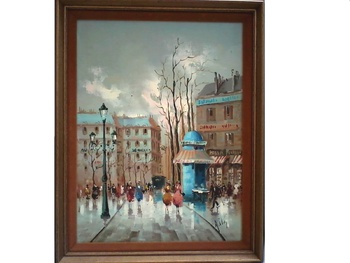 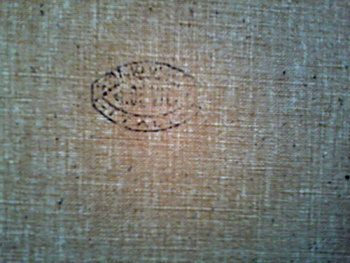 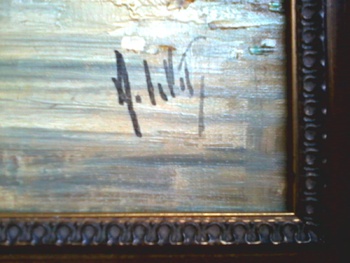 I braved the crowds at Volunteers of America early this morning for 50% off the entire store day. This always happens on the last Tuesday of every month. I went primarily for a pair of jade ear rings and the matching pendant which I've had my eye on all month. Miraculously they were still there. I'll post those later. I'm a bit more pleased to have found this pair of Antonio DeVity oils. I just love these mid-century Parisian street scene paintings. One in a horizontal landscape orientation the other in vertical portrait form. I have to admit I didn't recognize the signature right away and for once I actually found an artist's signature online. DeVity is one of the more well known artists of this genre. His paintings sell for a few to several hundred dollars. The price seems driven by the size and subject matter. Both of these are 12" x 16" unframed. Each frame is different and done here in Ohio at a shop in Cleveland. One is gold with ornate beading while the other is more contemporary with a velour insert. Both canvases have stamps on the back. About the only word I can make out is "Italia" on the one . The other picture's says "Studio d'arte A. Devity Italia". So these are genuine to his studio. The signatures match ones I've seen online. I would never have guessed it was A. DeVity. It looks like all straight lines basically. These were $3.95 each and half price too. So four bucks for these beauties. I can't believe my good luck ! -Mike-

Antonio De Vity was born in Reggio-Calbria in southern Italy. He lived in Naples and later moved to Rome where he was taught by Giacomo Balla, creator of futurism. He also lived and worked in Paris where he studied under Antoine Blanchard. He opened an art studio in Naples in 1950 which also became a meeting place for Neapolitan artists. He had Exhibitions in Brussels, Marrakesh, Madrid, Paris and other cities. DeVity sold his works for many years. His grandmother was originally from Paris. DeVity loved Paris and many of his popular scenes are of the Moulin Rouge, Notre Dame and le Cafe de la Paix. Antonio was educated at the Naples Art Lyceum and L'ecole des Beaux Arts in Paris.
DeVity's works have won international awards and he is recognized for his bright colors and impressionist treatment of the streets and waterways of Paris and Venice.