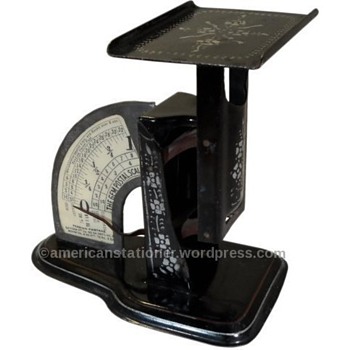 Weighing only 6 ounces and measuring 4.5" L x 2.875" W (the weighting platform is the widest part) x 4.5" H, the Gem Postal Scale was made from cold-rolled steel and enameled in a “japanned” finish. The one in my collection (shown in the picture above) also has a painted vine decoration in silvery-white on the front, sides, and on the weighting platform. Along with this design is some red and gold pinstriping. Many models of the Gem came in black but without additional adornment of any kind and later-made models could be found in basic grey enamel. The “basic black” design without additional decoration was available from the beginning of its manufacture until Triner stopped making it.

There are no markings on the scale. No patent information, not even the name Triner. The only information to be found is on the paper label which displays the postal rates and weights and it simply states “THE GEM POSTAL SCALE”. This can present a problem when trying to date a scale. There is essentially only one method you can use in this case, and that is the postal rates given on the dial. For example, on the scale in the picture above you’ll note that a letter cost 2 cents per ounce to send. Those rates would have been in effect from July 1, 1919 to July 5, 1932. Therefore, it would be reasonable to deduce that this scale was made in that time period.

The Gem Postal Scale was patented. Patent 752874 was applied for on June 22, 1901 and granted on February 23, 1904 to James M. Triner. This patent, however, was never assigned to the Triner Scale and Manufacturing Co.

A more in-depth write-up about the Gem Postal Scale can be found at americanstationer.wordpress.com 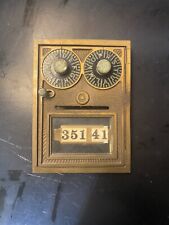 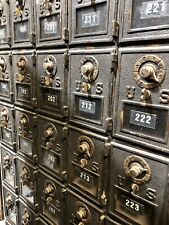