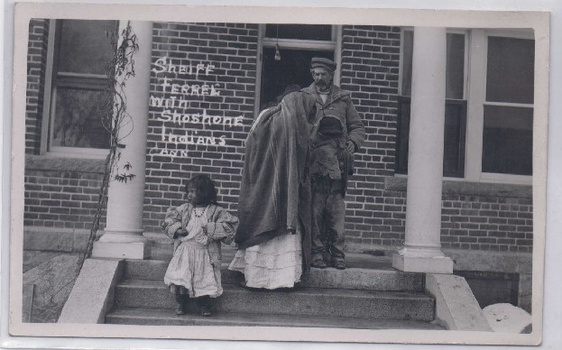 Found in a Box marked Ann's Personal Postcards from an Estate Sale in Carson City Nevada. Nevada Sheriff Charles Ferrel, with the four Bannock/Shoshone surviors of the Battle of Kelley Creek, on May 2, 1911 in front of a police station. Three of the Four Survivors ( all Children ) died within two years after this Photo was Taken from Tuberculosis. The Infant girl survived and was moved to Yakima Washington where she was adopted and named Mary Jo Estep who went on to college becoming a Music Teacher in later life, and never marrying. "Shoshone Mike" Daggett her Grandfather led his band of Indians through the mountains during one of Nevadas coldest winters on record followed by a Sheriffs posse for killing four men inspecting the death of rustled cattle Mike and his band had killed and eaten due to hunger. 8 Indians total and 1 posse member died that day on February 26 1911 during The Last Indian Massacre of Kelley Creek. I would be interested if there are more of these out there, and if anybody knows who took this picture originally.