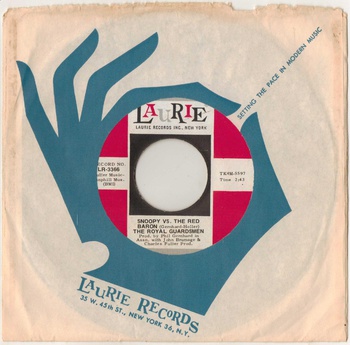 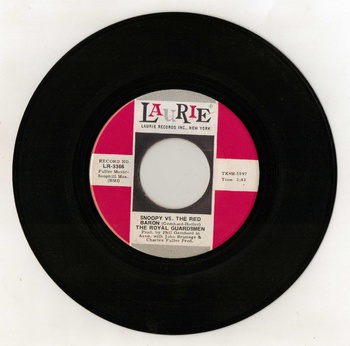 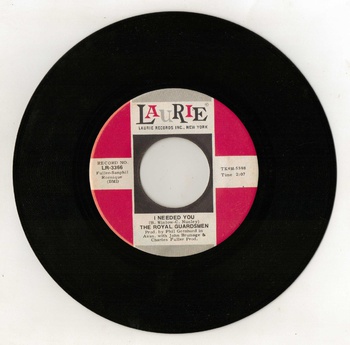 This is a 45rpm "oldies" in its original sleeve released in 1966 by Laurie Records, Inc., NY of "The Royal Guardsmen". / (1966) - #LR-3366
- Side A - "Snoopy vs. The Red Baron" / - Side B - "I Needed You"
** The Royal Guardsmen are an American rock band, best known for their 1966 hit single "Snoopy vs. the Red Baron" and the Christmas follow up "Snoopy's Christmas". They made a comeback in December 2006, when they released a new Snoopy song, "Snoopy vs. Osama", which became a hit on The Dr. Demento Show. - Originally known as the Posmen, the Ocala, Florida-based sextet adopted their anglophile moniker during the British Invasion, led by The Beatles and other British artists. The Guardsmen's first single, "Baby Let's Wait", failed to make the charts, but their second offering, "Snoopy vs. the Red Baron", reached #2 in the Billboard Hot 100, remained in the bestsellers for 12 weeks, and was certified gold by the R.I.A.A. in February 1967. - www.youtube.com/watch?v=N4Hh1TE3uRk