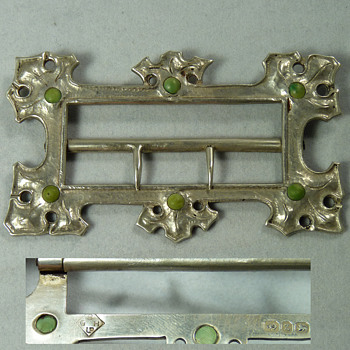 This buckle is by the Birmingham Guild of Handicrafts (more information below), hallmarked for Birmingham 1899.

The Birmingham Guild of Handicraft (BGofH ) formed in the late 1880's. From 1890 it was led by the silversmith and architect Arthur Dixon, with lawyer and entrepreneur Montague Fordham as its director. The Guild produced furniture and metalware, with Arthur Dixon as chief designer and head of the metalwork workshop. Other members were Albert Edward Jones and Thomas Birkett.

The Guild also ran a press that produced fine books and a short-lived periodical titled The Quest. William Morris was a contributor and Arthur Gaskin was involved with the press.

BGofH was modelled on Charles Robert Ashbee's 1888 Guild and School of Handicraft, and soon found itself in similar financial difficulties due to high expenses and low revenues.

By 1905 it had merged with another business and reorganised under new management.