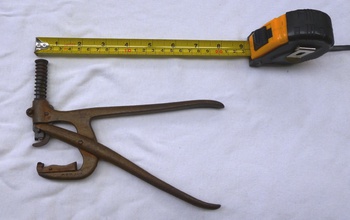 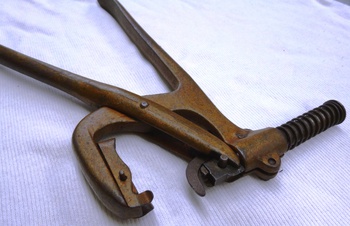 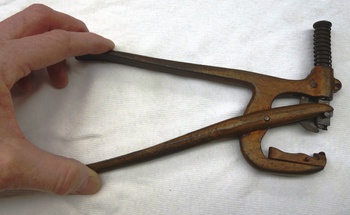 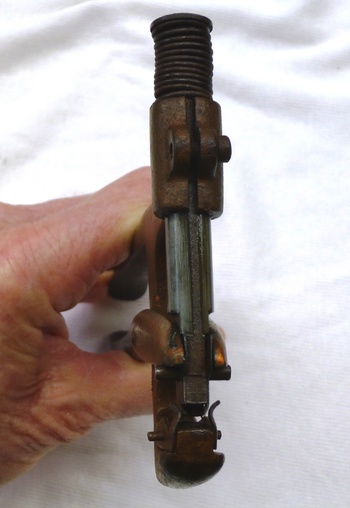 This is a tool I bought from a very well respected and well established vintage tool dealer in Myponga, South Australia. He would have recognised it if it was a saw set, a reloader or an ear tagger - but it was a mystery to him. He had been told it was something to do with the motor industry and possibly German. The German connection made sense because many German migrants settled in S.A.

The upper and lower jaws have spring clips - but one side of the clip on the upper jaw has broken off. There is a semi-circular shoulder in the lower jaw behind the prongs of the clip. It looks as if it's designed to locate whatever is slid in and retained by the clip. The hook that might retain something in the clip in the upper jaw retracts as the handles are squeezed. There is a small slotted recess apparently machined into the upper jaw between the prongs of the clip and a small, slight circular indentation between the prongs in the lower jaw. The lower jaw might have acted as an 'anvil' and its indentation might have formed with much use - it doesn't seem deep enough or well-formed enough to have been machined in there from new. The lower jaw seems to have what might be the letters OBRANG stamped in it, with a slightly wider spacing between what might be the R and the A. The upper handle has very faint lettering stamped on it but it is too faint to decipher.

I've looked at pictures of ear taggers, reloaders and saw sets and they seem much more robust than my mystery tool.

So it's now out there on this wonderful site for perusal by the experts! It cost me all of $8 and I've certainly had my money's worth of fun puzzling all and sundry over here.