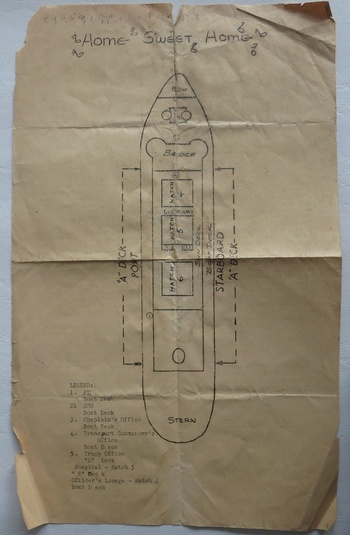 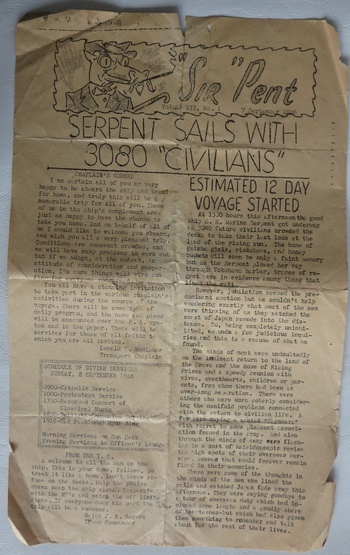 I recently found two editions of the "SIR" PENT, the published on ship news letters of the S.S. MARINE SERPENT, a troop transport ship commissioned on 21 September 1945. After WWII, veterans of the Pacific campaign were transported to the United States aboard the S.S. Marine Serpent.
These were found in some of my uncle's belongings. I'm not sure if he was aboard on this voyage, but it is a possibility since he has the first and last news letter of this voyage.
This first news letter is a one page (front & back) "Sir" Pent, Volume XII, No.1 dated 7 September 1946. It is titled, SERPENT SAILS WITH 3080 "CIVILIANS".
There is a welcome and protocol in the CHAPLAINS CORNER by Donald E. Modisher, Transport Chaplain.
Major J.E. Rogers, Troop Commander also gives a welcome and some ship rules.
Article in right column is titled, ESTIMATED 12 DAY VOYAGE STARTED, does not have a signature, but in the last voyage day edition the editor is listed as T/5 Paul Hardcastle. The article states " At 1300 hours this afternoon the good ship S. S. Marine Serpent got underway as 3080 future civilians crowded the decks to take their last look at the land of the rising sun. The home of geisha girls, rickshaws, and honey buckets will soon be only a faint memory, but as the Serpent plowed her way through Yokohama harbor, traces of regret were in evidence among those that lined the rail." (you should be able to enlarge the photo above to read the remainder of the article).
The reverse side, Home Sweet Home, is a diagram of the ships quarters with a legend showing the places of interest onboard.
This 12 day voyage will take them to the Seattle Port of Embarkation arriving on Tuesday, 17 September 1946 at approximately 1700 "GI" time as stated in the last voyage day news letter.
Thanks for looking,
Dave
(last news letter in next post)
http://www.collectorsweekly.com/stories/142538-sir-pent-dated-16-september-1946