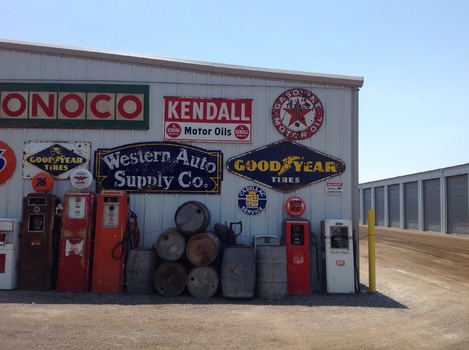 Seems like yesterday when Western Auto was THE place to buy your auto parts, hub caps, hitches or whatever. While the company actually sold guns and washing machines, it was mostly know as an Auto Parts store that sold vehicle related stuff. You bought your oil and filter from them to change your oil and light bulbs for your burned out head lamps or when you wanted the cool "cats eye" tail light lenses or "spinner" hubcaps for your 51 Ford. (Spinners actually came out on the Olds in about 1955 but we put them on everything) This cool sign came from a collector friend in Golden Co and was a neon sign from the 20s-30s era. Western Auto was a Company started in the Mid West in 1908 by a guy named George Peperdine who had an idea. An American Dreamer. He started out as a catalogue company and Not too long later he had 1200 Company stores & about 4000 stores across the Nation carrying his products. Yep! He's the Peperdine University guy! The Company was later bought by Sears and eventually went under. Too bad! It was another great American Dream that came and went. America is only great if we keep it great. Make your dreams happen! This is America and anybody can do it!