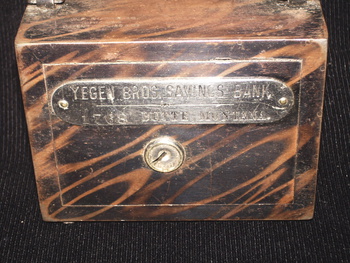 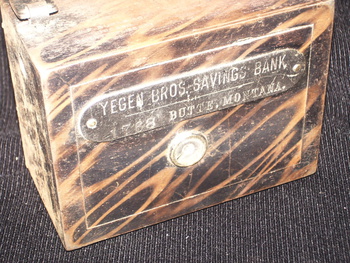 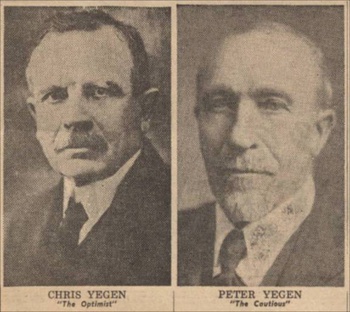 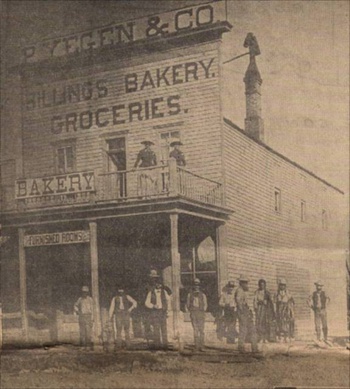 Hi
Everyone.
I want to share with you another promotional advertising steel bank, this time from Montana.
The Yegen Brothers,Savings Bank,Butte,Montana, Chartered Early XX century, close 1924.
Still Manufatured By W.F.Burns Company,Chicago,&New-York,Patented Applied for, this model as sharp corner.
Picture #3 & 4
Source::http://www.rootsweb.ancestry.com
Thanks for Viewing.
Alan

Yegen Brothers – Pioneer Billings Family
Peter Yegen was born in Klosters, Graubeeden, Switzerland, on August 7th, 1860; Christian was born earlier on January 19th, 1857 and educated there as a teacher. They had an older brother John, and sister Dorothee who came to America before 1879 and became bakers in Bismarck. Chris came to America in 1879 and joined John and Dorothee to learn the baker trade. He saved his money and soon acquired a farm. They relocated to Terry, MT and opened a bakery there. (Their parents were Conradin Yegen and Emerita Prader.) Peter came to America in 1881 to join his brothers and sister in managing a Glendive restaurant and a Terry section house restaurant. They sold buffalo meat, cranberries and bread. They saved about $3,000 to invest in a new bakery. In the spring of 1882 they moved to Billings and opened a store on the corner of Minnesota Avenue and 28th Street, under the name of “P. Yegen and Co.”

Business reverses, including mountain fever and the departure of the railroad train crews left the three brothers in debt. They baked their goods and peddled them from door-to-door. Chris took their last $2 and left for Livingston to cook for the railroad construction engineering crews, then went on to California to study bookkeeping and telegraphy. Peter stayed in Billings and worked in the section house until a small bakery could be bought on credit.

Soon after Peter started this store, he opened others along with his brother Christian. [Groceries-1885, hardware-1893, drygoods-1894, cold storage plant produce-1898, farm implements-1900, and others.] Their business enterprises soon became known as the “Yegen Bros”, and the name was spread across the valley as they expanded their operations. Their slogan was “We pay for ashes and sell dirt cheap.”

In 1895 they sold 20 Studebaker wagons to Buffalo Bill, and had extensive ranch and livestock holdings. Together, Chris and Peter, in 1900 they opened the first savings bank in Billings, and by 1904 had banks in Anaconda, Gardiner and Butte. Their sister continued to work with them until 1895. In 1903 they purchased the Millis & Co. wholesale business. They platted two sub-divisions in 1905. Their exposure to the Yegen Bros. Power Co. lost them over $200,000. In 1909 a fire in the Billings’ business area destroyed much of their holdings. The employees of the hardware business purchased it in December, and changed the name to Stroup Hardware. Later, Ryan Grocery purchased the wholesale business, and Renwick the implement operation. [Gazette 1960-family article]

In 1924 the banks closed, and Chris went to Musselshell and ran the Handel Bros. Store. He also was in charge of a Cut Bank mercantile firm. He and his wife (Laura B. Clark) married in 1893 and had five children. He became an alderman, then mayor of Billings in 1896; was member of the House and two-term state senator in 1902 and 1904. He served on the library and school boards. Peter married Margaret Tripp (from Switzerland) in 1890. They had three children.