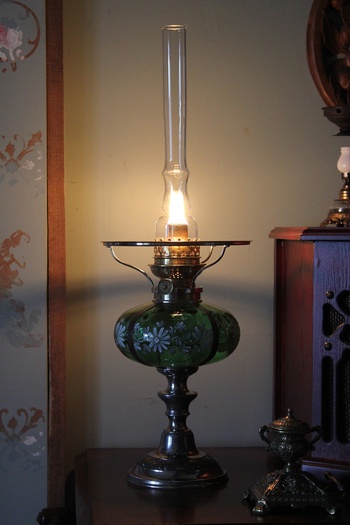 Here is my first lamp with a 14''' Kosmos burner. About 12" to the top of the burner with a spelter/pewter base. It was mailed from France and when I placed it in hot water to clean, it fell into pieces with brown resin oozing out of the stem. So that was my introduction to repairing stems and remounting glass founts. It is all sturdy and straight now and I could remove the metal straps around the glass but it speaks of it's history and someone spent some effort to solder those straps to it. I may in the future remove them but they certainly add character. The first picture is shown with a 7" Aladdin UBM (under burner mount) shade holder and a Sans Rival chimney. There is an interesting histoire in Miles Stair's website on how they found an existing chimney from 1919 in Norway and now produce replicas of it. The second photo shows the Astral type shade that now lives with this lamp. The age of the lamp is hard to tell. My guess is 1910-1940. The glass is smooth and has no lines from a mold. I believe it to be blown glass and someone in it's history has painted flowers with white enamel on it. It produces a wonderful light with relatively less fuel.