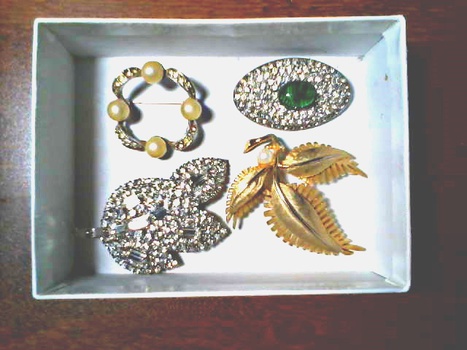 This was my pick for today from Salvation. Four pearl and rhinestone brooches. Two are marked and two are not. The circle pin with the four faux pearls spaced by rhinestones is Marvella. The oval pave rhinestone brooch with the green cabochon in the center is not marked. Neither is the pave and baguette rhinestone leaf. The gold dual layer leaf pin however is marked Boucher (1937 to 71'/72') and contains a single faux pearl near the stem. It's fairly easy to date Boucher pieces as they have an inventory number along with their mark. The copyright mark in front of their name was used by 1955. This pin has the number 8974 P. So it's from 1962-64 and the P stands for pin. An E would have been used on earrings. The 9100 numbers were used on the late 60's and 70's pieces until the company became part of Davorn Industries in 1972. Davorn sold the name and designs to Stutz Fashion in 1977. Early pieces seem to command very high prices. A UK site I checked out had their pieces listed from the hundreds to thousands ! This one being later however is no where near that. -Mike-