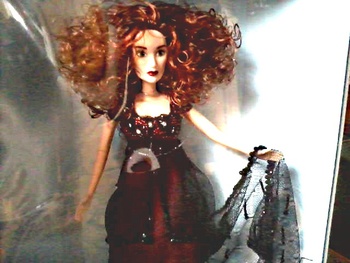 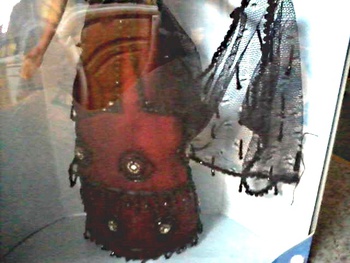 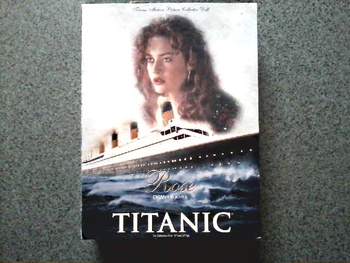 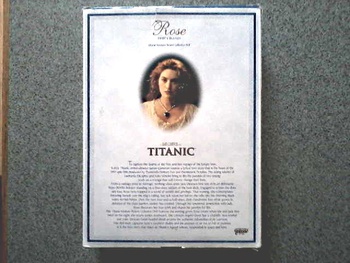 I've always been a bit "Titanic" crazy. Seen all the movies, built several models, and have lots of books on the subject. Now as far as dolls go this is a first and probably a last. It was in the display case at Salvation with the box closed. I asked what was in it and they said a doll. I thought to myself, "It would be kind of nice to at least open the lid of the box so it could be seen before putting it in the case." So now I had to ask to see it. It had two velcro tabs and the front lid opens to reveal Rose in her crimson Empire evening gown from the attempted suicide scene in which Jack saves her. Not a bad likeness of Kate Winslet (what's with the hair ??), but the dress is what really stands out.While not an exact replica of the movies gown it's inspired by it. All hand beaded with a Chantilly lace overlay and train which is also beaded. The doll looks like it never left the box which is a bit worse for wear. All the wires are still in place and taped to the back. There's a stand and a certificate of authenticity still in a pouch on the back of the doll's slide out tray. Some of the ones online are being called Titanic Barbies. These are not, as Rose here is made by Galoob . Everyone knows (or should) that Barbie is made by Mattel. So what was the motivating factor to buy this besides being a "Titanic" collectible ?.... Why half price of course. :)
-Mike-