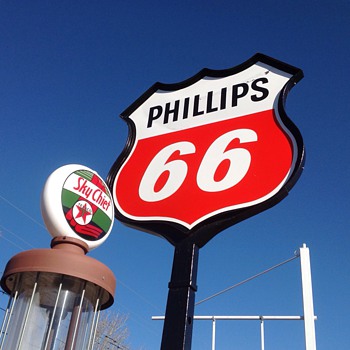 You gotta luv this cool Phillips sign. It came from a friend in Joplin Mo some time ago and is such a cool sign with such great colors for an old sign that has been out in the sun for decades. I just love the shield shape of the Phillips signs and it was a real awesome idea by someone in the marketing dept of Phillips waaaay back when. Whomever it was actually changed the name of the Company from Phillips to Phillips 66 so they could put a bunch of gas stations along the major East / West highway which was called Route 66 in those days. It was at that time that the same marketing people/person decided to "borrow" the shape of the Highway signs, which were the shield shape, and make the Phillips signs the same shape. Brilliant Marketing idea which has lasted for decades and has given Phillips a very cool looking sign which they still use today. Whatever they paid that guy in Marketing it wasn't enough! We have 5 of the big 6' Phillips signs at aaaLakeside Storage in Provo and we will just keep buying more as we find them as we can never have enough of the cool signs! Happy Hunting! Did I mention that the fun is in the hunt? Especially when you find something cool?