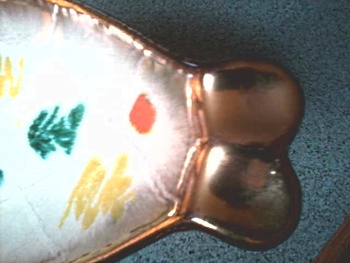 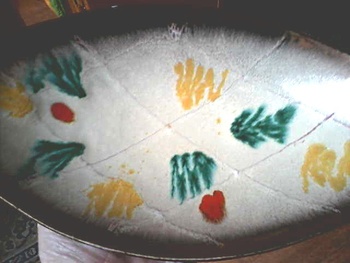 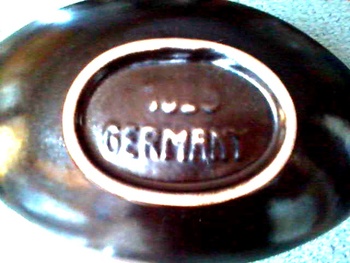 I finally got around to picking up the last piece from a large German pottery and porcelain donation at Salvation army. I saw Antique Rose's post from yesterday with her Carstens dish and I figured I better get it before it was gone. Luckily it stayed in the display case for the last 2 weeks and didn't sell. Pretty sure this is a Carsten's piece as well and a bit earlier than the 60's since it's only marked Germany. I believe West Germany was used after 1949 so this piece could be late 30's to mid 40's. Most of the other pieces in this collection were from the 20's and 30's so it's possible. The company has been in business since 1900. I saw a picture online of this same shape piece with a different design but it had a rattan handle hooked over each tab on the end. It was in the Getty collection and dated from 1957. Mine is missing the handle but I don't think it matters much. It's still a very nice piece and in perfect condition. -Mike-

Carstens Tonnieshof Keramik
anseta.com
Originally started in 1900, post war production began in 1947 at this company set up in north western Germany. Trude Carstens was artistic director until her death in 1965. The company was very successful, producing a wide range of shapes and glazes. The Luxus and Atelier ranges were more expensive products, Atelier was launched in 1962 and was designed by Gerda Heuckeroth. The Luxus range launched in 1967, being sold to large stores.