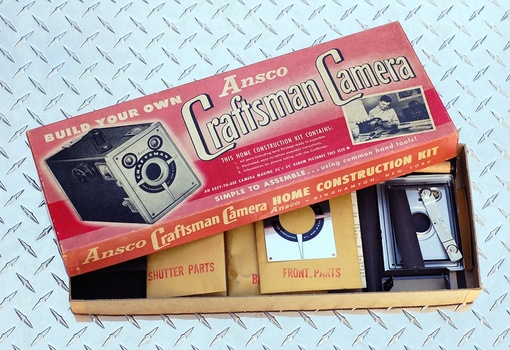 The Craftsman Camera Home Construction Kit was introduced in 1950, after Ansco tested the concept by recruiting schoolchildren to try it.
Advertisements in Boys' Life magazine in late 1950 told how building your own camera would teach you "the secrets of photography", and suggested that kids should drop hints to the folks to get one for Christmas.
All you need are pliers, a hammer, a screwdriver, and a few hours, and you're all set to shoot! I have no intention of building the camera though, since the kit is worth much more than the finished camera. This example is complete and unused, with all parts packages still sealed, after more than 60 years.

In 1951, Ansco began selling the Craftsman as a complete, factory-assembled camera. I don't know if there's a way to tell whether a Craftsman was made from the kit or at the Ansco factory. In any case, it was one of the very first cameras I wanted when I began collecting.