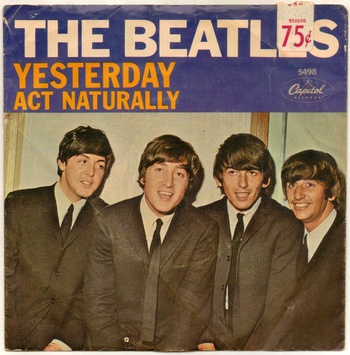 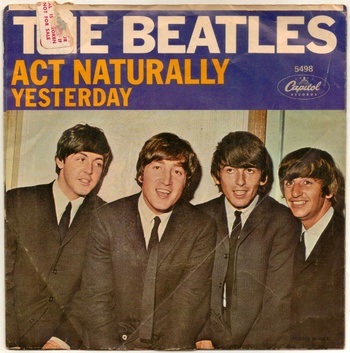 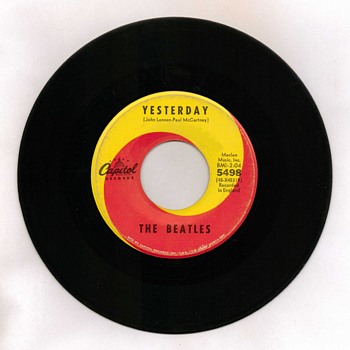 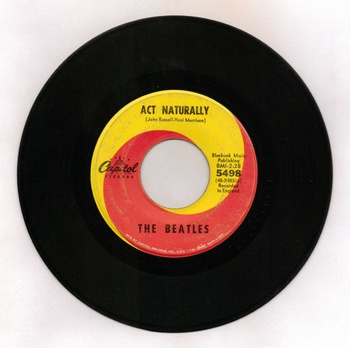 - 45 rpm record released in September, 1965 by Capitol Records
- "The Beatles" / Capitol #5498 (1965) - Beatles color picture sleeve
- Side A - "Yesterday" / - Side B - "Act Naturally"
** "Yesterday", written by Paul McCartney (credited to Lennon-McCartney) was first issued for their U.K. album Help! released August, 1965. Yesterday with B-side Act Naturally was released as a U.S. single September, 1965. While it topped the American chart in 1965 the song first hit the British top 10 three months after the release of Help! - The song also appeared on the U.S. album "The Beatles Yesterday and Today" released June, 1966.
** "Act Naturally" is a song written by Johnny Russell and Voni Morrison, originally recorded by Buck Owens and the Buckaroos, whose version reached number 1 on the Billboard Country Singles chart in 1963. The song has been covered by many other artists, including Loretta Lynn and Dwight Yoakam. The Beatles covered the song in 1965 on the UK version of their album Help! and released as the B-side of "Yesterday" in the U.S.