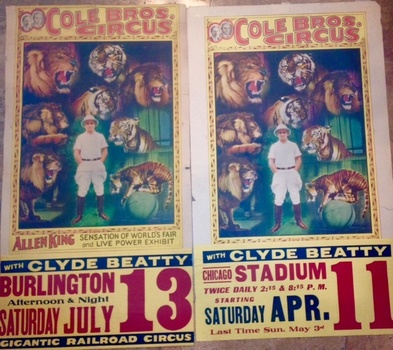 When the new Cole Bros Circus went out for its first season in 1935, it had two wild animal acts.

Clyde Beatty was a household name not only for his work on the Hagenbeck Wallace Circus (and Ringling Bros and Barnum & Bailey during its engagements in New York and Boston), but also a budding film career that he had in the early 1930s. The other act was Allen King, a similar presentation, but many say without the showmanship that Beatty possessed.

The circus was owned by two veteran showmen, Jess Adkins and Zack Terrell. For the opening of the circus Adkins hired Clyde Beatty from Hagenbeck Wallace which he had managed in '34. Terrell brought Allen King from his Standard Oil Live Power one-ring circus which he had managed at the Chicago World's Fair.

The Great Depression was still a major force in the American economy in 1935, and in late July cost cutting started. As part of a widespread reduction in expenses, Allen King and some animals were leased to another showman named Fred Bays. In August 1935 he opened the new Rice Bros Circus, featuring Allen King.

Although the performer was no longer with Cole Bros unused posters featuring Allen King remained on the shelves at Erie Litho and Ptg - and some of them were used the next season, in 1936, with the date tail cleverly positioned to cover King's name (see photo on the right). After all, in the eyes of the public, under that pith helmet - all wild animal trainers look alike!

(Posters from the Chris Berry Collection)