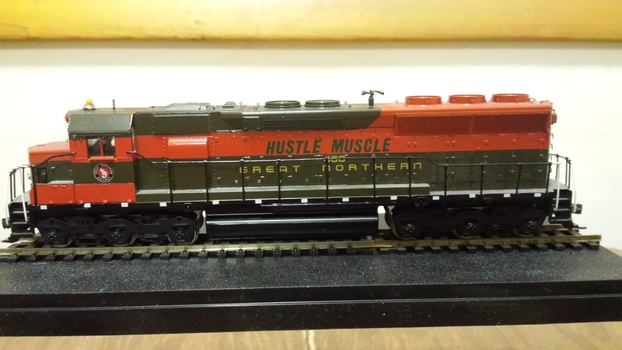 This is one of my best looking locomotives. Out of the 35 I have, this one I have in a display case because it looks so nice and I want to keep the dust off of it. I bought this at a hobby shop in Duluth, MN. I don't know who painted and detailed it, but they did a beautiful job. The real Hustle Muscle was the first production SD45 built by EMD in May 1966 for the Great Northern. It worked for GN until the Burlington Northern merger on March 2,1970. Then a few months later it was renumbered 6430 but kept it's GN paint until 1973. Then it was repainted cascade green during an overhaul, although it still kept it Hustle Muscle moniker. It was retired and donated to GN historical society in 1986. The GNRHS repainted it back to the GN green and orange and it's still running today at its home in the Twin Cities.